From the newsletter: Deadly protests - and a brutal crackdown - tell us much about the world in 2022. 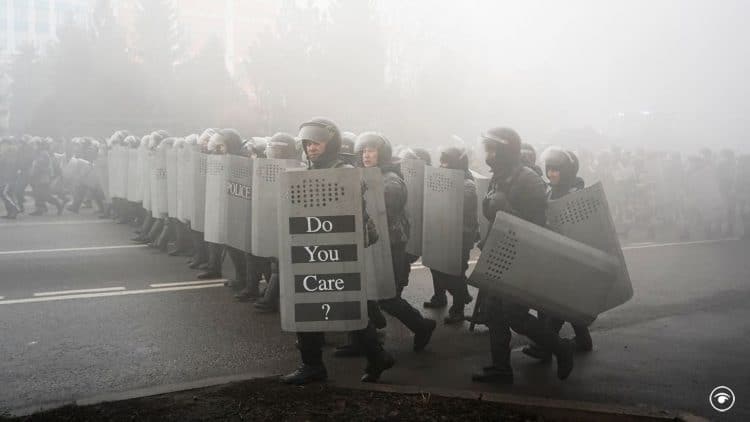 Good morning. Thanks to Jack for minding the shop before Christmas, when I was on holiday, and after, when I had the lurgy. We have big plans for Elevenses in 2022, so watch this space – and tell your friends to do the same.

Kazakhstan’s president, Kassym-Jomart Tokayev, claims constitutional order has been restored following days of deadly protests, during which more than 3,000 people were detained and 26 were “liquidated”, in the sinister words of the country’s interior ministry. It comes a day after Russia dispatched “peacekeeping forces” into the country, nominally to protect key infrastructure, amid chaotic scenes in Almaty, Kazakhstan’s largest city, with government buildings stormed, businesses looted and buildings set alight.

The protests began in the west of the country at the weekend, following a sharp spike in fuel prices – but have since swelled amid broader upset with Tokayev, who took over from Nursultan Nazarbayev in 2019. “It all started with the increase in gas prices but the real cause of the protests is poor living conditions of people, high prices, joblessness, corruption,” one protestor told The Guardian. Another told the New York Times that, while economic grievances and the pandemic were the trigger, the root cause was the absence of democratic participation under a Kazakh government that “has removed all legal ways to participate in politics”.

Kazakhstan is, in all likelihood, a long way away from where you’re reading this newsletter. Why, you might ask, are we devoting this space to it, given everything happening on our own doorstep? It’s a fair question. Crisis breeds introspection. It is unreasonable to expect Brits to wake up and check the latest dispatch from Almaty. And yet, two years into this pandemic, there is – to my mind at least – a sense that we, so worn down by our own endless slew of problems, quite simply care a little less about what goes on beyond our immediate gaze.

What is happening in Kazakhstan is distinct and complex. And yet there are threads running through it which will animate geopolitics not just for the next month or two, but for years to come. Like Russia – and other countries in the region – Kazakhstan has been battling rising prices for basic goods as the economic pain of the pandemic lingers and deepens. In Almaty, that pain has proved a tipping point in a country beset by decades of corruption, poverty and autocracy. Kazakhstan is comfortably the richest country in central Asia – oil rich, with a GDP per capita of $27,000. Yet the average salary is just $570 a month, its natural resources working to enrich a small cadre of elites, leaving the rest of its population of 19 million wanting.

Covid – as it has done here and everywhere – has shone a light on that stark inequality. In those heady sun-dappled days of 2020, as countries like the UK cautiously emerged from lockdown for the first time, lots of very clever people thought that everything would quickly flick back to normal. Covid would be a short, sharp shock – but business as usual would soon resume. Now, what seems like an eternity later, it is remaking the world before our eyes, still, two years on.