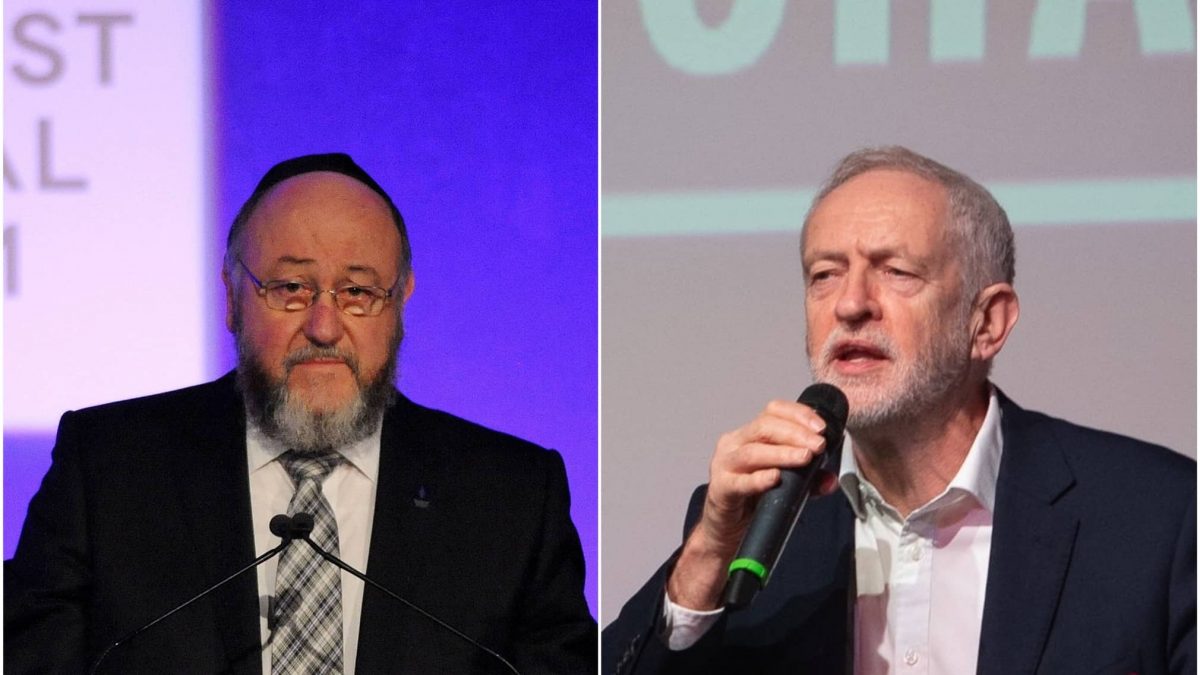 Chief Rabbi Ephraim Mirvis, who claims without any basis, to speak for British Jews, has attacked the Labour Party yet again. In a deliberate attempt to undermine the Labour Party’s announcements of wide-ranging strategies to support minorities who have suffered so badly under the Tories, and using terminology that has historically been associated with the extreme right, he claims that “a new poison” has taken hold of the party.

This General Election is a two-way fight. To attack Labour is to promote a Tory Party that has formal links with far-right, openly antisemitic, anti-Islamic, anti-Roma and anti-refugee groups and parties in Europe, such as the Polish Law & Justice Party, Victor Orbán in Hungary, the Sweden Democrats and others.

Our own Conservative party is led by a person who unashamedly and unapologetically uses racist and homophobic language. He has referred to black people as “piccanninies with water melon smiles”, to Muslim women as resembling “letter boxes” and “bank robbers”. He has ridiculed gay men as “bum boys in tank tops”. And the Tory Party in government has inflicted untold damage on the lives and futures of members of minority communities through the Hostile Environment and the Windrush scandal.

Mirvis is not a neutral commentator: he is a close friend of the previous Conservative Prime Minister, who he invited for dinner with her husband the night before she took office. Though he claims to be challenging racism, he has never, to my knowledge, joined Jewish anti-racists on demonstrations alongside other vulnerable groups challenging the frightening rise of all forms of racism, including antisemitism, that we have seen over the last few years.

He writes as though Jews are a people apart from everyone else, rather than celebrating our part in the fabric of a wonderfully diverse society, living, working and campaigning alongside and in solidarity with others. Instead of representing the majority of Jews who use and often work in the public services on which we all depend, he throws in his lot with the Tories who have wreaked such destruction on our NHS, our schools, our welfare system and the infrastructure of our country.

He has not been elected by anyone. He represents one branch of religious Judaism – Britain’s 62 Orthodox synagogues. He does not speak for Jews who are more religious or less religious than him, or not religious at all. Many thousands of us are members and supporters of the Labour Party precisely because of its determination to heal the rifts that have been created by an increasingly extreme Conservative Party. Labour’s politics are predicated on the need to encourage, respect and value everyone, and particularly to support black and minority ethnic people, who have to navigate a system that demoralises and undermines them throughout their lives.

At the launch of its Race & Faith Manifesto today, Jeremy Corbyn said that the Party would strengthen protection for religious communities and amend the law to include attacks on places of worship (synagogues, temples, mosques and churches) as a specific aggravated offence.

And he reiterated the principle that there was no place for the evil of antisemitism anywhere. The entire Race & Faith Manifesto is testament to Labour’s determination to pull down the barriers and tackle inequality so that everyone, whatever their ethnic, religious, social or economic background, has a chance to live a decent life and fulfil their potential. Rabbis are supposed to be teachers and moral leaders and most of us would expect them to support such life-affirming human values.

Julia Bard is a journalist, Labour Party member, and on the editorial committee of Jewish Socialist.