By The Retired Raver The eagerly anticipated leaders election debate took place tonight in Cambridge with the conspicuous and much mentioned absence of the Prime Minister Theresa May. The seven politicians including the last minute entrance of Labour leader Jeremy Corbyn, took their places onstage and lined up to challenge Conservative stand in Amber Rudd on Theresa May’s record. Members […] 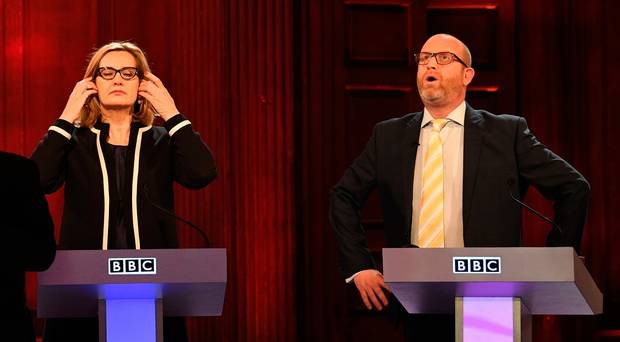 By The Retired Raver

The eagerly anticipated leaders election debate took place tonight in Cambridge with the conspicuous and much mentioned absence of the Prime Minister Theresa May. The seven politicians including the last minute entrance of Labour leader Jeremy Corbyn, took their places onstage and lined up to challenge Conservative stand in Amber Rudd on Theresa May’s record. Members of the audience asked questions on subjects from brexit to immigration and the economy, but did the Prime Minister’s tactic of staying away work?

At first look it would appear not. The leaders repeatedly pointed out her lack of engagement with the electrate on her campaign trail, with Lib Dem leader Tim Farron taking the biggest laugh of the night in his closing line ‘Theresa May can’t be bothered to give you her time, don’t give her yours’ and the Green’s Caroline Lucas calling her absence ‘downright insulting’. It is true to say she has it all to lose still, but her recent u turns and dementia tax disaster have left her ‘strong and stable’ retoric looking increasingly weak.

The debate itself was a lively affair with the participants all ‘bringing their A game’ as the pundits would say, even the odious Paul Nuttall was very, well, Paul Nuttall… and all clearly relished the opportunity to launch scathing attacks on the absent PM.

The line up was Caroline Lucas for the Greens, Leanne Wood for Plaid Cymru, Tim Farron for the Lib Dems, Angus Robertson for the SNP, Paul Nuttall for UKIP, Jeremy Corbyn for Labour and Amber Rudd for the Conservatives.

But the debate belonged to Jeremy Corbyn, clearly enboldened by his growing poll statistics and positive manifesto reactions, the Labour leader gave a strong and statesman like performance. He was clearly prepared for questions on his costing and gave detailed answers about raising corporation tax stating his proposal to raise it to 26% would still leave it below the rate of 2010. Clearly enraged by the country’s growing inequality he challenged Amber Rudd asking ‘Have you ever actually been to a food bank? Have you seen the numbers of people sleeping on our streets? Do you know the levels of poverty that exist for many people in our country?’

Amber Rudd for the most part followed the party line with predictable statements about needing ‘strong and stable leadership through brexit’ (yawn…) and accused Corbyn of believing in ‘a magic money tree’ however, her assertion that voters should ‘judge them by their record’ was met with audible laughter from the audience and jeers about her uncosted manifesto.

Plaid Cymru’s Leanne Wood gave a spirited performance taking Paul Nuttall to task about his policy of ‘No EU divorce fee’ saying ‘there’s no such thing as a free divorce’.

Tim Farron repeated the need for a second EU referendum and spoke of the urgent need to stay in the single market.

But the question most of were left with was is any of this going to make any difference to the outcome of the general election? Well the answer it seems is as clear as mud. While none of the participants had any major disasters they didn’t seem to land any killer blows either. In fact, the biggest story of the night appears to be the absence of the Prime Minister and what if anything, it says about her leadership. It was indeed clever politics by Corbyn in deciding to partake in the debate as it appears the more the public see and hear of him the higher his ratings climb.

The latest Yougov poll has forecast a shock prediction of a hung parliament. The poll suggests the Conservatives may win 310 seats, 16 short of an absolute minority 21 fewer than David Cammeron in 2015. Yougov also stated significant potential ‘churn’ closer to polling day with a ‘wide margin for error’ in it’s results, with Conservatives, Labour and Lib Dems all likely to lose and gain seats. The latest Comres poll however suggests the Conservatives are still 12 points ahead. So as I said, clear as mud but there is still all to play for.