By Ben Gelblum, Contributing Editor @BenGelblum To paraphrase France’s greatest export (apart from Stella Artois) Jean Paul Sartre: “all human endeavours are doomed to failure.” Tony Blair and John Major join the EU Referendum fray today with even more nightmarish complications for those hoping for a quick and easy Brexit – like having to renegotiate […] 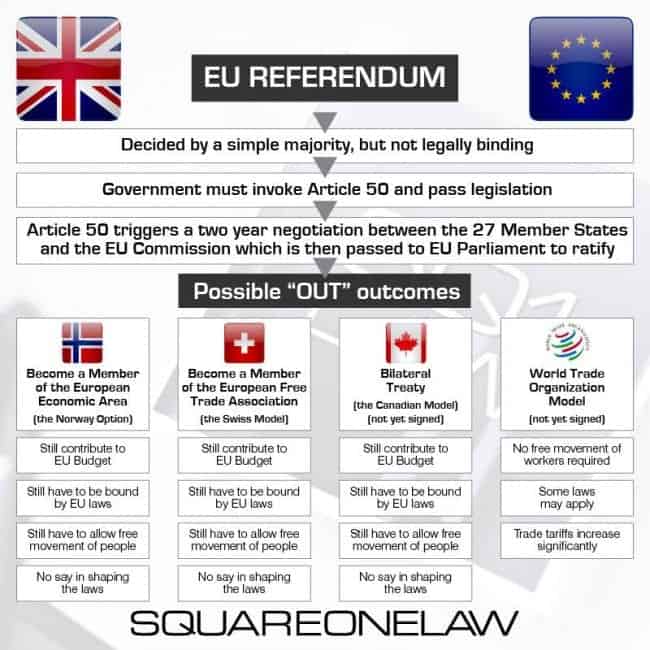 To paraphrase France’s greatest export (apart from Stella Artois) Jean Paul Sartre: “all human endeavours are doomed to failure.” Tony Blair and John Major join the EU Referendum fray today with even more nightmarish complications for those hoping for a quick and easy Brexit – like having to renegotiate the whole Northern Ireland peace process while dealing with the possible dissolution of the United Kingdom with another Scotland Independence referendum leaving us rebuilding Hadrian’s Wall to stop Europeans getting into Britain that way – to mention just a couple of possible snags.

With an extra 24 hours left to register to vote in this historic decision for Britain, and a pounding headache from the mind-boggling array of arguments on both sides, The London Economic turned to leading EU lawyer Neil Warwick for a simple breakdown of what would actually really happen if we vote to leave Europe this month.

To encourage everybody to make a decision informed by facts, Neil has kindly laid out the only four real outcomes if Britain votes Brexit.

“Which ever way people decide to vote on 23 June, they need to be able to easily understand the implications of their decision. I have been struck by how overly complicated and negative the majority of the press coverage has been about this crucial vote,” says Neil.

“It is important to recognise in three of the four scenarios the UK would still be subject to EU law and free movement of people, but crucially would no longer have any input into the formation of new EU laws.”

“From a legal perspective these are the only possible outcomes unless a completely off the wall deal is struck,” Neil Warwick told The London Economic. “Once the UK serves its intention to leave one of these options will have to be agreed within two years. – But the downside is the UK won’t have its say as to which one is agreed.”

And here lies the rub…

Neil explains: “The other 27 member states have to decide and agree by a majority which of these deals to offer the UK. The UK government then decides whether to agree to the deal. The UK can try and make slight alterations, but it can’t shape the negotiations as to which one it is offered. And if there is no agreement by the end of two years, then the last option – the World Trade Organisation option is what we get whether we like it or not.”

If the UK government does not agree to whichever the EU offers us out of the Norway model, Swiss model or a Bilateral agreement- all still bound by EU regulations, freedom of travel and paying into the EU budget, then the UK would have to negotiate tariffs for imports and exports through the World Trade Organisation (WTO) while agreeing to certain regulations to allow such trade too.

Neil, who divides his time between Brussels and law firm Square One Law in Newcastle where he is a partner, warns: “All the tariffs we avoid with the EU would apply. If you take two very specific examples – firstly one close to our hearts in the North East – the current WTO tariff for export of vehicles would be 10%. Nissan in the North East can currently export all its vehicles with absolutely no tariff into the EU. Instead they would have to add 10% to the cost of their cars. And it works both ways – the current tariff for importing wine is 13%, so all wine drinkers would be upset too!”

“It is also worth noting that the negotiations to leave the EU would take a minimum of two years from the point the Article 50 notice is served, but any new arrangement could take at least ten years to conclude. If we stay in the EU, there would be no legal changes to the current arrangement,” adds Neil. “No matter which outcome people favour, it is important that everyone places their vote on 23 June.”
@BenGelblum