Hundreds of thousands of students marched across the US and in cities across the world to demand an end to school shootings that have occurred on average once a week this year in the United States. 500,000 students were expected in the main march on Washington DC led by pupils of Marjory Stoneman Douglas High School, […] 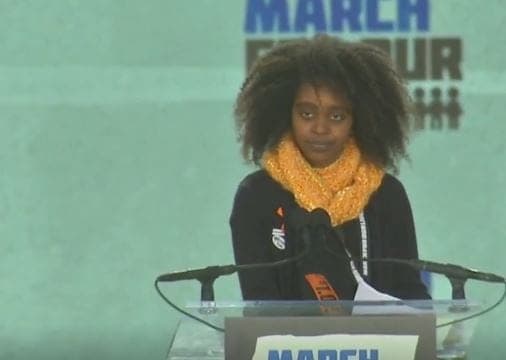 Hundreds of thousands of students marched across the US and in cities across the world to demand an end to school shootings that have occurred on average once a week this year in the United States.

500,000 students were expected in the main march on Washington DC led by pupils of Marjory Stoneman Douglas High School, Florida, where 17 were shot dead, with sister marches in over 830 cities across the globe.

President Trump was not in Washington to hear the pupils. He had left the White House to play golf in Florida, where some of the speakers had come from to demand an end to the influence of the gun lobby on American politics.

Donald Trump initially expressed support for tighter gun controls after the Parkland Florida school shooting spree, promising parents and survivors of school shootings who met him tighter background checks and other measures. But after meeting National Rifle Association (NRA) lobbyists he appears to have forgotten his pledges.

The #MarchForOurLives campaigners are asking politicians to ban the sale of assault weapons like the ones used in Las Vegas, Orlando, Sutherland Springs, Aurora, Sandy Hook and, most recently, to kill 17 innocent people and injure more than a dozen others at Marjory Stoneman Douglas High School.

Of the 10 deadliest shootings over the last decade, seven involved the use of assault weapons.

They also believe there is no need for civilians to own high-capacity magazines such as the ones the shooter at Marory Stoneman High School and many other recent mass shootings used.

States that ban high-capacity magazines have half as many shootings involving three or more victims as states that allow them.

Limiting the number of bullets a gun can discharge, the marchers argue, will at least force any shooter to stop and reload, giving children a chance to escape.

22% of US gun sales occur without a background check. The campaigners are also asking for an end to loopholes that allow guns to fall into dangerous hands when bought online and at gun shows.