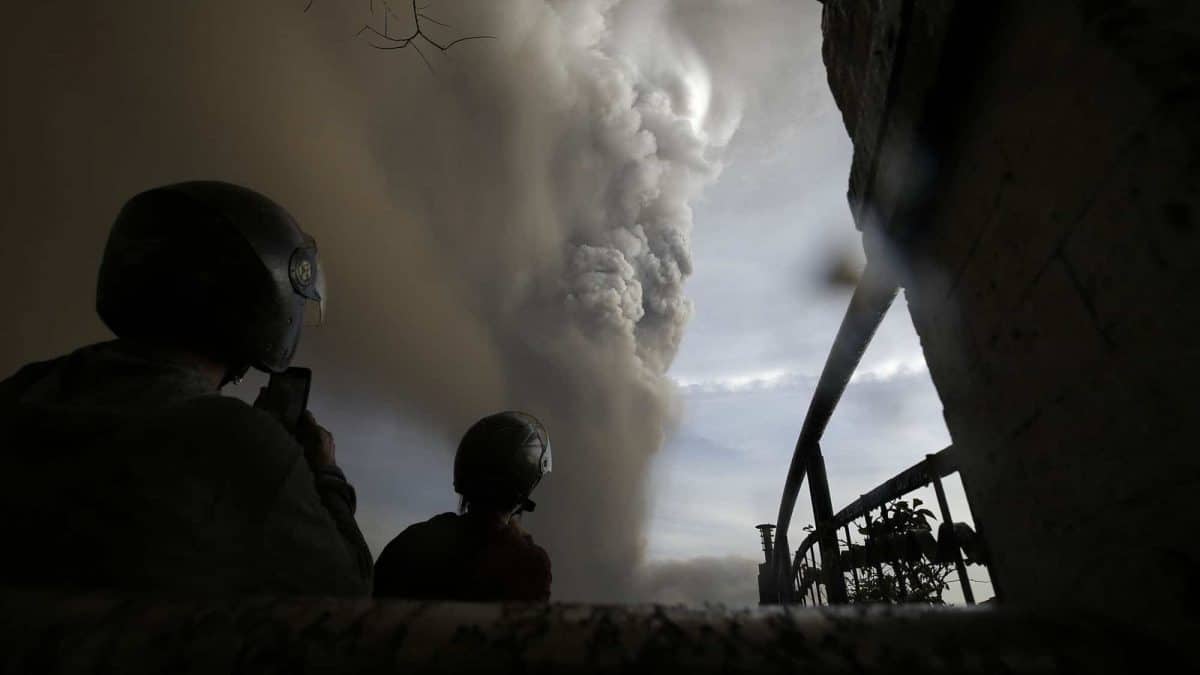 Lava has begun spewing from a volcano in the Philippines as authorities warned of “an imminent hazardous eruption”.

The Philippine Institute of Volcanology and Seismology said Taal Volcano in Batangas province south of Manila blasted steam, ash and pebbles up to six to nine miles into the sky.

Level five, the highest, means a hazardous eruption is under way and could affect a larger area.

The Taal volcano began to erupt in the early hours of Monday and followed clouds of ash and steam emanating from the site, south of the capital Manila, on Sunday.

Authorities scrambled to evacuate villagers from an island in the middle of a lake, where the volcano lies, and tens of thousands more from nearby coastal towns, officials said.

Clouds of ash blew more than 62 miles north of the Taal volcano, reaching the capital.

All departing and arriving international and domestic flights were suspended on Sunday night at Manila’s international airport “due to volcanic ash in the vicinity of the airport” and nearby air routes, the Civil Aviation Authority of the Philippines said.

The government’s disaster-response agency and police reported about 13,000 villagers have moved to at least 38 evacuation centres in the province of Batangas and nearby Cavite province, but officials expect the number to swell with hundreds of thousands more being brought out of harm’s way.

Some residents could not move out of ash-blanketed villages due to a lack of transport and poor visibility while others refused to leave their homes and farms, according to officials.

There were no immediate reports of injuries or damage, but authorities scrambled to evacuate more than 6,000 villagers from an island in the middle of a lake, where the volcano lies, and tens of thousands more from nearby coastal towns, officials said.

About 300,000 people were targeted to be moved to safety in Batangas overnight and in the next few days.

“We have asked people in high-risk areas, including the volcano island, to evacuate now ahead of a possible hazardous eruption,” Mr Solidum said.

Renelyn Bautista, 38, who was among thousands of residents who fled from Batangas province’s Laurel town, said she hitched a ride to safety from her home with her two children, including a four-month-old baby, after Taal erupted and the ground shook mildly.

“We hurriedly evacuated when the air turned muddy because of the ashfall and it started to smell like gunpowder,” Ms Bautista said by phone.

All departing and arriving international and domestic flights were suspended on Sunday night at Manila’s international airport “due to volcanic ash in the vicinity of the airport” and nearby air routes, the Civil Aviation Authority of the Philippines said.

“We have a problem, our people are panicking due to the volcano because they want to save their livelihood, their pigs and herds of cows,” mayor Wilson Maralit of Balete town told DZMM radio.

“We’re trying to stop them from returning and warning that the volcano can explode again anytime and hit them.”

One of the world’s smallest volcanoes, Taal is among two dozen active volcanoes in the Philippines, which lies along the so-called Pacific Ring of Fire, a seismically active region that is prone to earthquakes and volcanic eruptions.

About 20 typhoons and other major storms each year also lash the Philippines, which lies between the Pacific and the South China Sea, making it one of the world’s most disaster-prone countries.

Aviation officials ordered the closure of Clark International Airport north of the capital after ash fell in the area.

Authorities said they were considering diverting flights to unaffected airports outside Manila.

The volcanology institute reminded the public that the small island where the volcano lies is a “permanent danger zone,” although fishing villages have existed there for years.

It asked nearby coastal communities “to take precautionary measures and be vigilant of possible lake water disturbances related to the ongoing unrest”.

Authorities recorded a swarm of earthquakes, some of them felt with rumbling sounds, and a slight inflation of portions of the 1,020ft volcano ahead of Sunday’s steam-driven explosion, officials said.