The money will be used to buy a new drone system to fight off Russia's invasion. 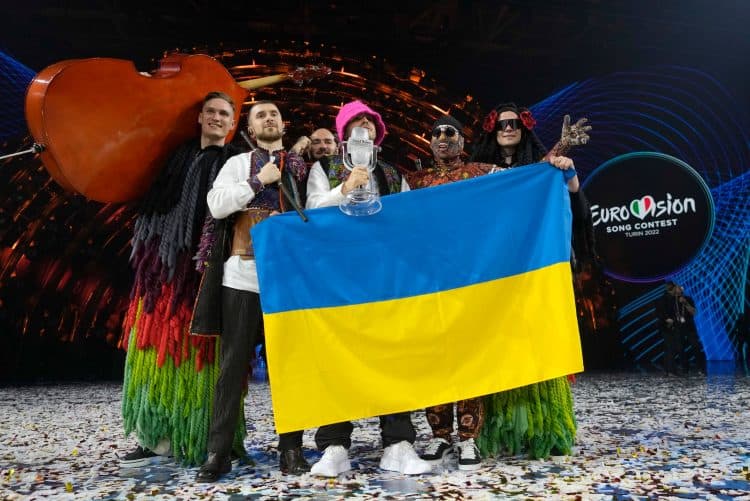 During the contest, Kalush Orchestra received an unprecedented show of support from the rest of the continent following Russia’s invasion of Ukraine.

And now the group has decided to sell the iconic crystal microphone they received as a prize in a Facebook auction, hosted by Ukrainian TV personality Serhiy Prytula on Sunday.

The money will reportedly be used to buy a PD-2 drone system for the Ukrainian army – which includes three aircraft and a ground control system.

The winning bid of 500 Ethereums was placed by WhiteBit, a European cryptocurrency exchange with more than two million users. Bids were accepted in both crypto and traditional currencies.

Alongside the microphone, lead singer Oleh Psiuk’s signature pink bucket hat was sold off – with tickets priced at €5 each.

Weeks before claiming victory at Eurovision in Berlin, Kalush Orchestra had been fighting Russian aggressors in the streets.

Kalush Orchestra, who were fighting as part of the Ukrainian resistance only weeks before Eurovision, received support from across Europe for their performance.

They beat Britain’s Sam Ryder into second place, with Ukrainian president Volodymyr Zelensky going on to claim the country would host the contest in Mariupol next year.

They later released a dramatic video of their winning song set against images from several besieged cities near Kyiv, including Bucha, Irpin, Borodyanka and Hostomel.

Related: Dan Wootton asks why two people are wearing masks and is called out on Twitter