The Kremlin said it would now focus on its "main aim": "liberating" Donbas. 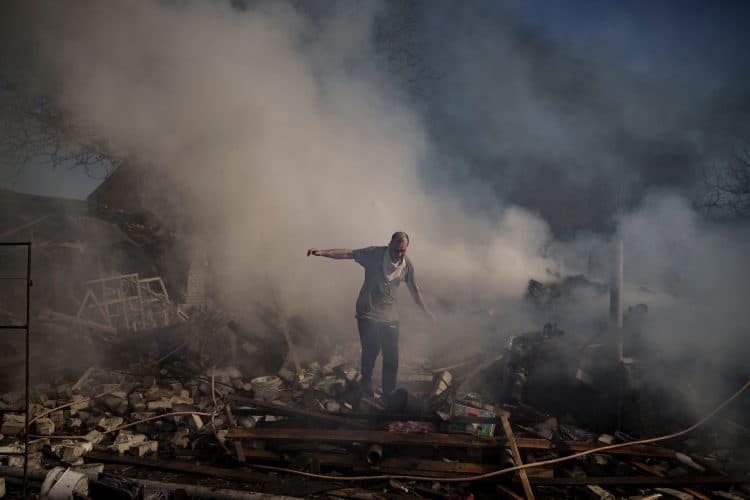 Russia said it would refocus its war in Ukraine on the country’s eastern Donbas region, in comments suggesting a scaling back of Moscow’s attacks on other parts of the conflict-ravaged country.

And he described the bombardment of other cities, including Kyiv, as part of a strategy to distract the Ukrainian army.

Ukrainian authorities and western officials reacted with cautions to the claims of a change in strategy, which come amid reports that Russia’s advances on Kyiv and other cities have stalled.

“The main aims of the first phase of the operation have been fulfilled,” Rudskoy said. “The military capacities of Ukraine’s armed forces have been significantly decreased, which allows efforts to be focused on achieving our main aim: liberating Donbas.”

He added that Moscow’s goal had always been to “liberate” Donbas – and it chose to target Ukrainian military capacity across the country first.

“We never planned to storm them,” Rudskoy said, referencing Kyiv, Kharkiv and other besieged towns.

While Russia “does not exclude the possibility” of still targeting these cities, “our forces and resources will be focused on their main aim — the complete liberation of the Donbas”, he added.

Ukrainian president Volodymyr Zelensky hailed his troops as having delivered “powerful blows” to the invading forces as he urged Moscow to negotiate an end to the month-long war.

An adviser to the Ukrainian ministry of defence, Markian Lubkivskyi, predicted troops could on Saturday take back Kherson, the first major city that the Kremlin’s forces seized.

He was sceptical that the Russian President’s aims had truly changed away from trying to take the whole nation, but said it does appear “the enemy is focused on the eastern part of Ukraine”.

Zelensky’s forces were already believed to be regaining ground around the capital of Kyiv and the UK Ministry of Defence said Russians are “proving reluctant to engage in large scale urban infantry operations”.

Instead, the MoD said, they were preferring the “indiscriminate use of air and artillery bombardments in an attempt to demoralise defending forces”.

However, there were fresh signs it was Putin’s troops who were struggling with morale, as Western intelligence suggested a Russian brigade commander was deliberately run down and possibly killed by his own troops.

Lubkivskyi told BBC Radio 4’s Today programme: “We cannot believe the statements from Moscow because there’s still a lot of untruth and lies from that side.

“That’s why we understand the goal of Putin still is the whole of Ukraine.

“We can see now that the enemy is focused on the eastern part of Ukraine but we are ready for any kind of attacks in different Ukrainian places.”

The port city Kherson, in the south east, fell to the Russians early this month in their first major gain.

But Lubkivskyi said: “I believe that today the city will be fully under the control of Ukrainian armed forces.

“We have finished in the last two days the operation in the Kyiv region so other armed forces are now focused on the southern part trying to get free Kherson and some other Ukrainian cities.”