Andrew Jackson’s ruthless treatment of Native Americans has made his monument a target for protesters against the US legacy of racial injustice. 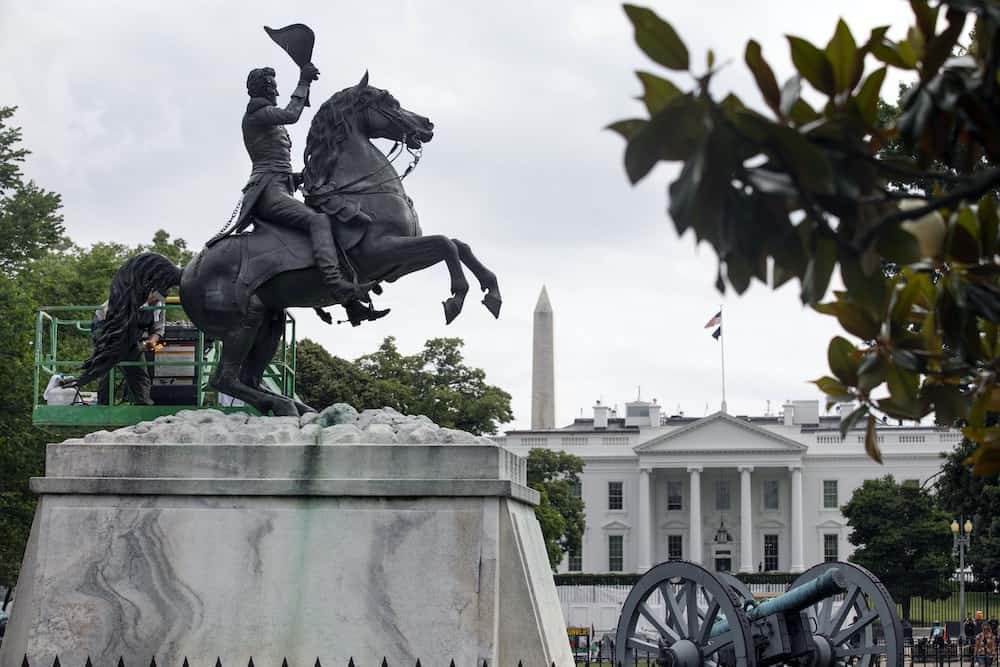 Protesters have attempted to pull down a statue of former US president Andrew Jackson near the White House before being dispersed by police.

WUSA-TV in Washington reported on Monday night that police used pepper spray to move protesters out of Lafayette Square, where the Jackson statue is located.

Videos posted on social media showed that the protesters had climbed onto the statue and tied ropes around it, before trying to pull it off its pedestal.

The statue shows Jackson in military uniform, riding a horse that is rearing up on its hind legs.

The 19th century president’s ruthless treatment of Native Americans has made his statue a target for demonstrators protesting against the United States’ legacy of racial injustice.

The Jackson statue remained on its pedestal Monday night.

US president Donald Trump tweeted late on Monday that “numerous people” had been arrested for “the disgraceful vandalism”.

He added: “10 years in prison under the Veteran’s Memorial Preservation Act. Beware!”

US interior secretary David Bernhardt issued a statement, saying: “Let me be clear: We will not bow to anarchists. Law and order will prevail, and justice will be served.”

On June 1, law enforcement officers forcefully cleared peaceful protesters from Lafayette Square in order for Mr Trump to stage a photo op at a nearby church.

Jackson, a former US Army general nicknamed “Old Hickory,” served two terms in the White House, from 1829 to 1837, espousing a populist political style that has sometimes been compared with that of Trump.

Jackson became wealthy because of his slave ownership. He owned as many as 161 slaves, buying and selling them, using their labor to build his fortune and even bringing them to the White House to work for him.

Native American activists have long criticised Jackson, a Democrat, for signing the 1830 Indian Removal Act, which led to thousands of Native Americans being driven from their lands by the US government and forced to march west, in what became known as the “Trail of Tears.”

The Trail of Tears was a series of forced relocations of approximately 60,000 Native Americans in the United States from their ancestral homelands in the Southeastern United States, to areas to the west of the Mississippi River that had been designated as Indian Territory.

The forced relocations were carried out by government authorities following the passage of the Indian Removal Act in 1830. The relocated peoples suffered from exposure, disease, and starvation while en route to their new designated reserve, and approximately 4,000 died before reaching their destinations or shortly after from disease.