Over-60s who refuse jabs will be fined €100 every month, with cash going to the Greek health service. 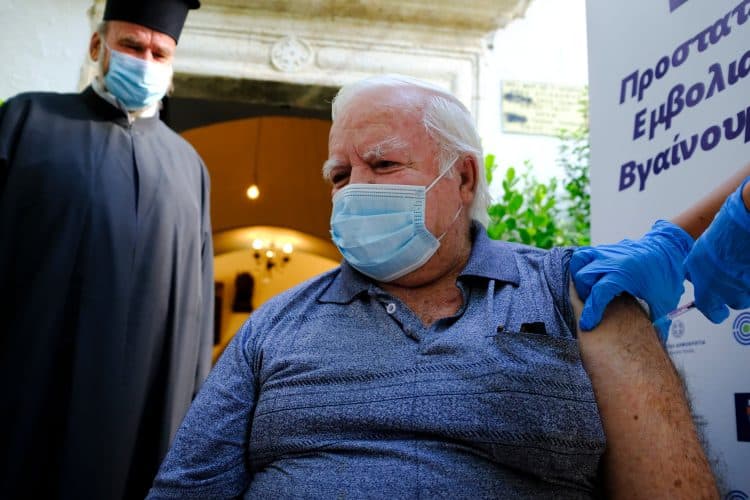 Greece will make Covid vaccinations mandatory for over-60s, and fine those who refuse.

Fines of €100 (£85) will be imposed at monthly intervals from mid-January with the money going towards the Greek health system, Prime Minister Kyriakos Mitsotakis said.

Roughly 63 per cent of Greece’s 11-million population is vaccinated, but data shows more than 520,000 people over 60 are yet to get the jab.

“Greeks over the age of 60… must book their appointment for a first jab by January 16,” Mitsotakis said in a statement to the cabinet. “Their vaccination is henceforth compulsory.”

The measure is still to be put to a parliamentary vote, but lawmakers are widely expected to approve it.

Other countries have made vaccines mandatory for health workers and other high-risk workers, Greece will become the first in the EU to target a specific age group.

Austria has also announced that compulsory Covid vaccinations will begin in February.

Mitsotakis said the decision had “tortured” him, but he felt a “heavy responsibility in standing next to those most vulnerable, even if it might fleetingly displease them”.

Meanwhile the expansion of the UK”s Covid booster programme poses a “huge logistical challenge” for the NHS, experts have said.

Health leaders said the campaign was already at its “most complex phase” even before the Government confirmed changes to the programme.

The Joint Committee on Vaccination and Immunisation (JCVI) said that all adults should become eligible for boosters and that the time between second dose and booster should be reduced from six months to three months.

Now ministers have set the challenge for the NHS to offer boosters to all adults in just 62 days.

The NHS has set out plans to increase capacity as well as call in military support and an army of volunteers.

Amanda Pritchard, NHS England chief executive, told a Downing Street press conference that the NHS was working with St John Ambulance and the Royal Voluntary Service to recruit “tens of thousands” more volunteers, and on Monday the NHS will start to recruit 10,000 paid vaccinator roles.

Saffron Cordery, deputy chief executive of NHS Providers, which represents NHS trusts, said: “The target to offer boosters to all eligible adults by the end of January presents a huge logistical challenge for the NHS, but given the potential threat from the Omicron variant, it is absolutely the right thing to do.

“There are many competing pressures. The health service is already operating at, and sometimes beyond, full stretch.

“But trusts have been at the heart of the vaccination campaign that has done so much to curb the threat from Covid-19, and will play their full part in expanding and accelerating the programme.”

NHS Confederation’s chief executive, Matthew Taylor, said accelerating the booster programme would have consequences for a service that was already stretched.

“I think we can do it but to do it will have other consequences,” he told BBC Radio 4’s PM programme.

“Everybody knows our health service is under unprecedented pressure this winter. When you take a system that is already under enormous pressure and finds it difficult to cope, and you throw something else into it, then I’m afraid it will have consequences.

“We need to be realistic about what the health service is going to be able to do when it is prioritising these booster programmes.”