Huoshenshan Hospital was built by construction crews who are working around the clock in Wuhan. 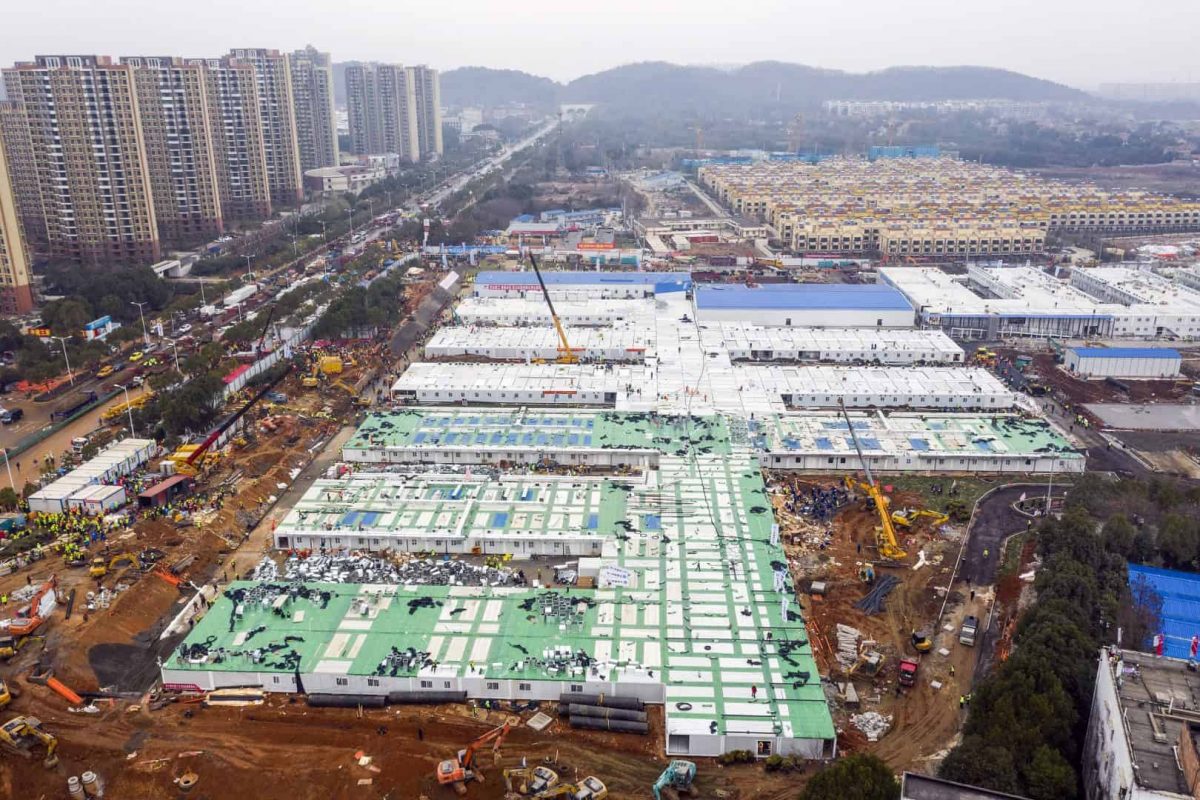 The first patients have arrived at a 1,000-bed hospital built in 10 days as part of China’s efforts to fight a new virus.

China has updated the death toll from the coronavirus outbreak to 361. An additional 2,829 new cases have been reported over the last 24 hours, bringing the Chinese total to 17,205.

The latest figures Monday come a day after the first death from the illness was recorded outside China, in the Philippines, as countries around the world evacuated hundreds of their citizens from the infection zone.

Chinese authorities completed a new, rapidly constructed 1,000-bed hospital for victims of the outbreak and delayed the reopening of schools in the hardest-hit province. Huoshenshan Hospital and a second facility with 1,500 beds that is due to open this week were built by construction crews who are working around the clock in Wuhan, the city in central China where the coronavirus outbreak was first detected in December.

Most of the city’s 11 million people are barred from leaving the area.

The Wuhan treatment centres mark the second time Chinese leaders have responded to a new disease by building specialised hospitals almost overnight. As severe acute respiratory syndrome, or Sars, spread in 2003, a facility in Beijing for patients with that viral disease was constructed in just one week.

This is a stark contrast to Boris Johnson’s election pledge to build 40 new hospitals in the UK, where it turns out six existing hospitals in England have been given money to upgrade their buildings by 2025, and up to 38 hospitals are being given money to develop plans for their hospitals between 2025 and 2030, but not to actually begin any building work.

The first patients arrived at the Huoshenshan Hospital on Monday, according to Chinese state media. The reports gave no details of the patients’ identities or conditions.

The ruling Communist Party’s military wing, the People’s Liberation Army, sent 1,400 doctors, nurses and other personnel to staff the Wuhan hospital, the official Xinhua News Agency said. Many have experience fighting Sars and other outbreaks.

Authorities have cut most road, rail and air access to Wuhan and surrounding cities, isolating some 50 million people, in efforts to contain the viral outbreak that has sickened more than 17,000 and killed more than 360 people.

The Huoshenshan Hospital was built by a 7,000-member crew of carpenters, plumbers, electricians and other specialists, according to the Xinhua News Agency.

Photos in state media showed workers in winter clothing, safety helmets and the surgical-style masks worn by millions of Chinese in an attempt to avoid contracting the virus.

About half of the two-storey, 60,000-square-metre building is isolation wards, according to the government newspaper Yangtze Daily. It has 30 intensive care units. Doctors can talk with outside experts over a video system that links them to Beijing’s PLA General Hospital, according to the Yangtze Daily. It said the system was installed in less than 12 hours by a 20-member “commando team” from Wuhan Telecom Ltd.

The building has specialised ventilation systems and double-sided cabinets that connect patient rooms to hallways and allow hospital staff to deliver supplies without entering the rooms.

The hospital received a donation of “medical robots” from a Chinese company for use in delivering medicines and carrying test samples, according to the Shanghai newspaper The Paper. In other cities, the government has designated hospitals to handle cases of the new virus.

In Beijing, the Xiaotangshan Hospital built in 2003 for Sars is being renovated by construction workers. The government has yet to say whether it might be used for patients with the new disease.

The Shanghai Composite index tumbled nearly 8% on Monday as Chinese regulators moved to stabilize the markets jolted by coronavirus that has spread to more than 20 countries, stopping regional tourism and threatening global growth.

The outbreak of the virus in China has prompted governments around the world to step up surveillance and quarantine requirements as airlines cancel hundreds of flights. Millions of Chinese remained in lock-down as the number of people infected by the virus topped 17,205 recorded cases in mainland China. Restrictions were tightened still further in one city by allowing only one family member to venture out to buy supplies every other day.

The Philippine Health Department said a 44-year-old Chinese man from Wuhan, the city at the centre of the crisis, was hospitalised on January 25 with a fever, cough and sore throat and died after developing severe pneumonia.

The man’s 38-year-old female companion, also from Wuhan, tested positive for the virus as well and remained hospitalised in isolation in Manila.

Philippine President Rodrigo Duterte approved a ban on the entry of all non-citizens from China. The US, Japan, Singapore and Australia have imposed similar restrictions despite criticism from China and an assessment from the World Health Organisation (WHO) that such measures were unnecessarily hurting trade and travel.

The vast majority of those infected are in China; about 150 cases have been reported in two dozen other countries. The US on Sunday reported its ninth case, this one involving a woman in the San Francisco Bay Area’s Santa Clara County who arrived in the US to visit family after recently travelling to Wuhan.

Six officials in the city of Huanggang, next to Wuhan in Hubei province, were fired over “poor performance” in handling the outbreak, the official Xinhua News Agency reported.

It cited the mayor as saying the city’s “capabilities to treat the patients remained inadequate and there is a severe shortage in medical supplies such as protective suits and medical masks”.

Reports of infected households locked in their homes

The trading and manufacturing centre of Wenzhou, with nearly 10 million people in coastal Zhejiang province, confined people to their homes, allowing only one family member to venture out every other day to buy necessary supplies. Huanggang, home to seven million people, imposed similar measures on Saturday.

With no end in sight to the outbreak, authorities in Hubei and elsewhere have extended the Lunar New Year holiday break, due to end this week, well into February to try to keep people at home and reduce the spread of the virus. All Hubei schools are postponing the start of the new semester until further notice.

The crisis is the latest to confront Chinese leader Xi Jinping, who has been beset by months of anti-government protests in Hong Kong, the re-election of Taiwan’s pro-independence president and criticism over human rights violations in the traditionally Muslim territory of Xinjiang.

Meanwhile, the domestic economy continues to slow, weighed down by slowing demand and the trade war with Washington.

New Zealand announced on Sunday it is temporarily barring travellers from China. The 14-day ban applies to foreigners leaving China but not to New Zealand residents. New Zealand also raised its travel advice for China to “Do not travel,” the highest level.

Saudi Arabia’s state-run media reported that 10 Saudi students were evacuated from Wuhan on a special flight. It said the students would be screened on arrival and quarantined for 14 days.

Over the weekend, South Korea and India flew hundreds of their citizens out of Wuhan. A Turkish military transport plane carrying 42 people arrived in Ankara on Saturday night.

A French-chartered plane made its way toward France on Sunday with 300 evacuees from a multitude of European and African countries. And Morocco flew home 167 of its people, mostly students.

Indonesia flew back 241 citizens from Wuhan on Sunday and quarantined them on the remote Natuna Islands for two weeks. Several hundred residents protested the move.

Europe so far has 25 people infected with the virus. The German Red Cross reported two more cases there on Sunday, both German citizens who were airlifted from Wuhan on Saturday on a military transport carrying 128 people. Eight earlier cases in Germany were all linked to a car parts factory.

France has six cases; Russia, Italy and Britain have two each, and Finland, Sweden and Spain each have one.

Vietnam counted its seventh case, a Vietnamese-American man who had a two-hour layover in Wuhan on his way from the US to Ho Chi Minh City. The country ordered schools to close for at least a week in 19 of its 54 provinces and cities, including Hanoi and Ho Chi Minh City, which together account for more than four million students.

The number of confirmed cases will keep growing because thousands of specimens from suspected cases have yet to be tested, said the WHO representative in Beijing, Gauden Galea.