The Survival Racist of the Year award was given ahead of a visit to Downing Street where the indigenous leaders will call on the UK to halt trade deals with Brazil until their peoples’ survival is protected. 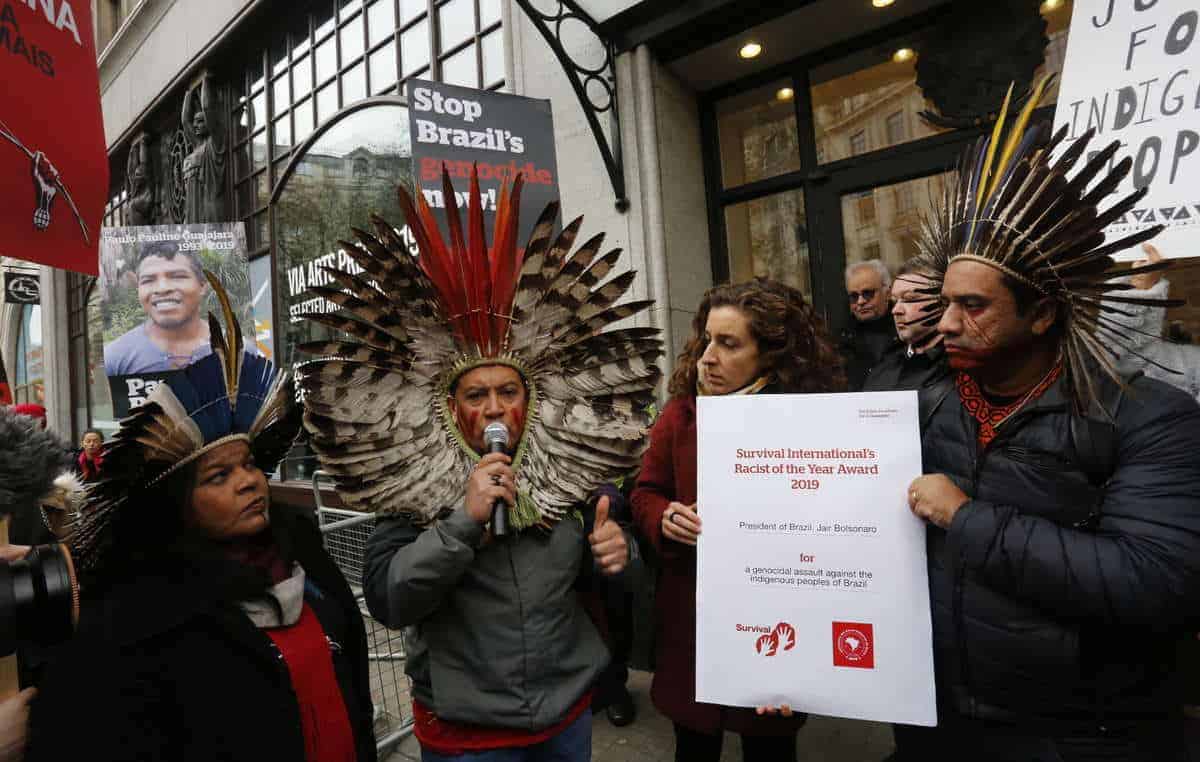 Ten indigenous leaders from across Brazil took part in a major protest outside the Brazilian Embassy in London to demand an end to the destruction of their lands and people.

At the demo the leaders handed in to the embassy a Racist of the Year award, this year won by President Bolsonaro for his openly racist abuse of indigenous people, threats to assimilate them and attacks on their rights and right to exist.

Among the many racist statements made by Mr Bolsonaro are: “It’s a shame that the Brazilian cavalry hasn’t been as efficient as the Americans, who exterminated the Indians.”

Since coming to power President Bolsonaro has hampered FUNAI – Brazil’s Indigenous Affairs Department. His racist rhetoric has led to a skyrocketing number of invasions of indigenous territories, and he is trying to make it easier for agribusiness and extractive industries to exploit resources in indigenous territories. The tribal leaders are visiting Europe to plead for international pressure to ensure their peoples’ survival.

The Indigenous tribal leaders’ visit to London comes after an intensification of attacks on indigenous peoples in recent weeks. Indigenous Amazon Guardian Paulo Paulino Guajajara was assassinated in an ambush by at least five armed loggers in the Araribóia Indigenous Territory in the eastern Amazon last Friday, November 1. At dawn on October 31, FUNAI’s monitoring post for uncontacted tribes in the Javari Valley, in the western Amazon, was attacked by armed men.

They are in London as part of the Indigenous Blood: Not a Single Drop More tour calling on people in Europe to boycott Brazilian agribusiness until their rights are respected. Tomorrow they will hand in a petition to Downing Street.

You can add your name to the petition here. The Greenpeace petition has been signed by more than 200,000 people calling on the UK government to suspend trade talks with Brazil until the Amazon and its people are protected.

The tribal delegation’s meetings in Europe have focused on defending the non-ratification of the Mercosur-EU agreement under its current terms. France threatened to oppose the trade deal because of Brazil president Bolsonaro’s ‘lies’ about fires that blazed across the Amazon. However, with Britain poised to leave the EU, the UK government has already been having talks with Brazil over trade, so the leaders of Brazil’s first peoples are delivering a letter along with the petition pleading with the UK to put their survival on the agenda.

Sonia Guajajara, the Executive Coordinator of APIB, the Association of Indigenous Peoples of Brazil, which has organised the visits to Europe, said: “President Bolsonaro wants to destroy the indigenous peoples of Brazil. His racism and hate encourage miners and loggers to invade our territories and kill our people. Well, I’ve got news for him – we love our lands much more than he hates us, and we will never allow him to destroy us, or the forests we have protected for so long.”

Racist of The Year is an award by Survival International, the global movement for tribal peoples. Survival’s Director Stephen Corry said: “Since coming to power, President Bolsonaro has mounted a ruthless assault on the rights of Brazil’s first peoples, and is hell bent on opening up their lands to big business. His openly racist comments and refusal to accept indigenous peoples’ rights to their own lands are fuelling violence against indigenous people across Brazil. If he gets his way, the country’s first peoples will be wiped out. But they’re fighting back with energy, bravery and determination, and so are their allies. And we’re not going to back down.”

Alison Kirkman of Greenpeace, whose petition will be handed into Downing Street on Friday, told The London Economic: “Since President Bolsonaro took office in January, Indigenous Peoples have seen the government agencies responsible for enforcing Indigenous and environmental safeguards undermined and dismantled, their funding cut.

“Fires have been set by land-grabbers emboldened by the words and actions of President Bolsonaro. Agribusiness expansion is swallowing the forests, the land and the peoples that depend on it. International and domestic protections are violated with impunity, forcing Indigenous Peoples to guard their territories against attacks at their own risk.

“These actions are being driven by greed; by the profit to be made by clearing the forests of Brazil to grow animal feed and for cattle ranches, and by the global market for goods produced out of environmental destruction and indigenous blood.”

READ MORE: My friend was murdered for protecting the Amazon

Seven of the most worrying things Brazil’s Bolsonaro has said