There are calls to publicly acknowledge that it was a gathering spot for the Ku Klux Klan. 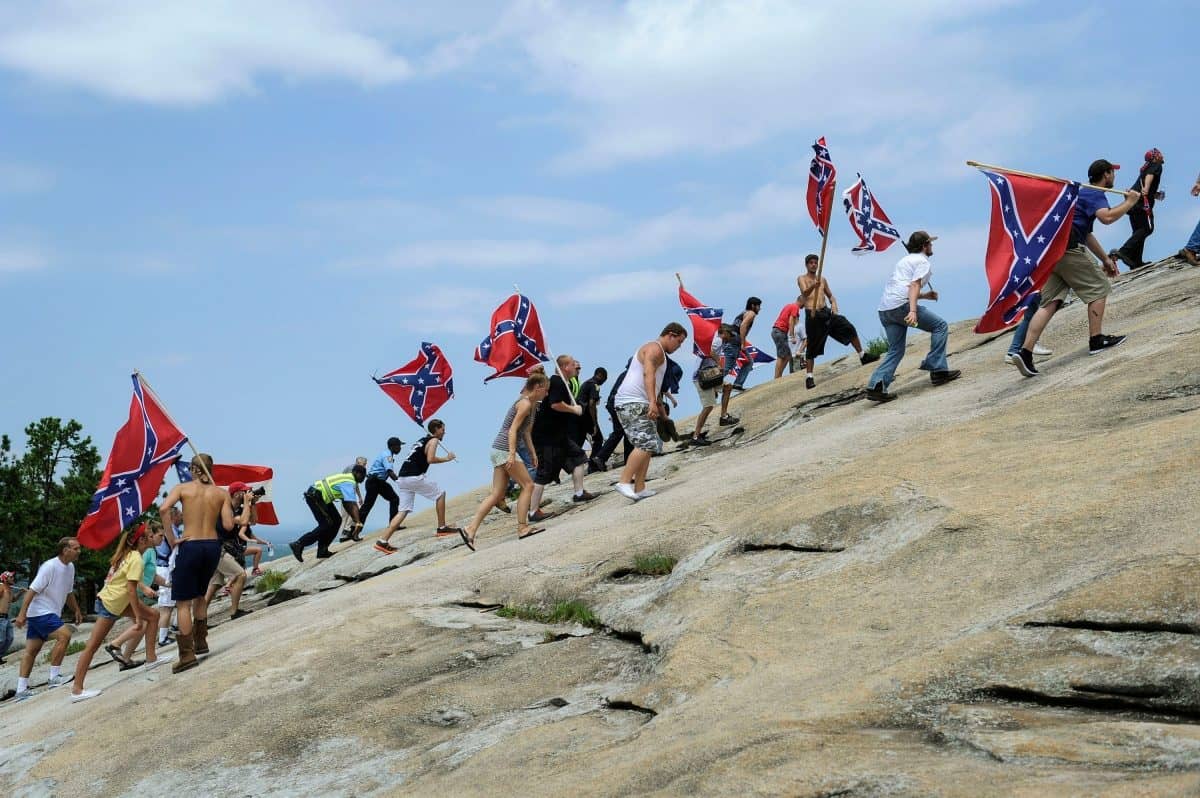 A park near the US city of Atlanta with a giant carving of Confederate leaders would publicly acknowledge that it was a gathering spot for the Ku Klux Klan, relocate Confederate flags and remove the carving from its logo under proposals unveiled to address criticism of its Confederate legacy.

Stone Mountain Memorial Association chief executive Bill Stephens presented the proposals to the park’s board, saying Stone Mountain needed to change to remain financially viable but could not “cancel history”.

The board did not immediately vote on any of them.

The park 15 miles northeast of central Atlanta is a popular hiking and tourist destination but is replete with Confederate imagery, including a colossal sculpture of General Robert E. Lee, Confederate President Jefferson Davis and General Thomas J. “Stonewall” Jackson on the mountain’s northern face.

It is the largest Confederate monument ever crafted.

The proposals come amid a national reckoning on race that brought down dozens of Confederate monuments in a span of weeks last year.

Some speakers at Monday’s meeting said the changes before the board did not go far enough.

Many of the Confederate monuments that are now controversial were erected in the early 1900s by groups composed of women and veterans.

Some honour generals or soldiers; others bear inscriptions that critics say wrongly gloss over slavery as a reason for the war or portray the Confederate cause as noble.

Stone Mountain’s carving, which measures 190 feet across and 90 feet tall, was completed in 1972 and shows the three Confederate leaders mounted on horseback.

The celebration of the Confederacy at the park is used to “oppress people”, said Bona Allen, with the grassroots group Stone Mountain Action Coalition.

The coalition last year proposed that the association remove Confederate flags at the base of the mountain, change the names of streets and other park features with Confederate affiliations and refocus the park around such themes as racial reconciliation and justice.

Meymoona Freeman, a leader of the group, said it wanted to see the carving of Lee, Davis and Jackson transformed into a natural space.

The sculpture has special protection enshrined in Georgia law, and Mr Stephens said it was not going anywhere.

Martin O’Toole, a lawyer, said the law requires that Stone Mountain serve as a memorial to the Confederacy.

“It’s not the purpose to contextualise it,” he said.

“It’s not the purpose to talk about the Ku Klux Klan or other things like this.”

The proposals also call for the creation of a new museum exhibit at the park to relate the history of the carving and the consolidation of artefacts and monuments related to the Confederacy in one location.

Roads and trails would be renamed, though not any that currently have Confederate names.

Mr Stephens said the proposals would not satisfy everybody, but he called them a “common sense middle ground”.

The park has lost corporate sponsors and revenues are down, he said.

“Economically, we can’t stay the way we are,” he said.

“We can either take charge of it or we can be defined by it.”

The board could vote on at least some of the proposals next month.

Mr Mosley said after the meeting he supported the proposals but wanted to see more changes.

“I think this is a first step to a lot of good things to come hear at the Stone Mountain park.

“It’s just going to take time to get there.”