A video of a troupe of dancers performing at an Australian military event has gone viral in Australia, almost causing the explosion of heads among the country’s conservative politicians and commentators. 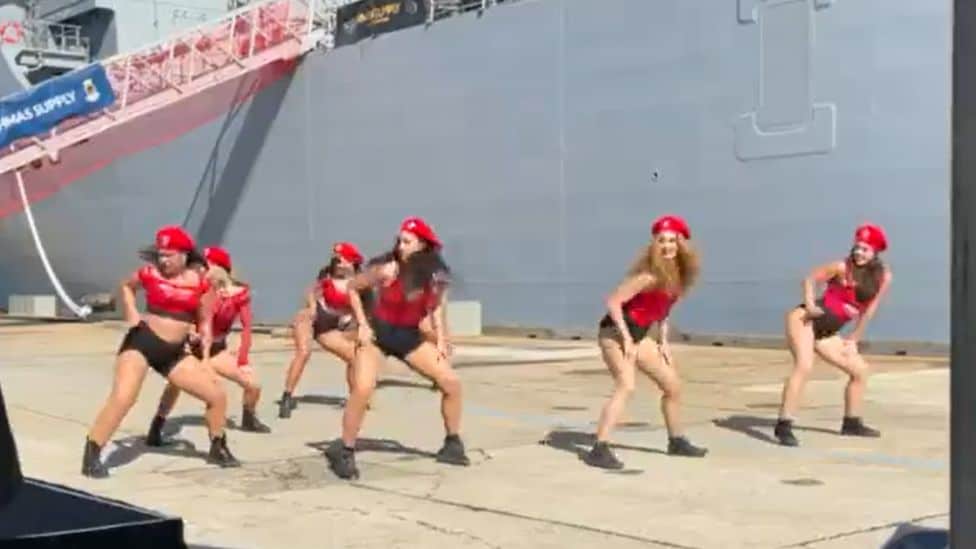 A video of a troupe of dancers performing at an Australian military event has gone viral in Australia, almost causing the explosion of heads among some of the country’s conservative politicians and commentators.

The dance troupe 101 Doll Squadron were hired by the Royal Australian Navy to perform at a commissioning ceremony on Saturday for a new ship, the HMAS Supply.

However, helped along by a misleading tweet from ABC, and sensational headlines from the Murdoch press, slamming military standards, Conservative lawmakers led a chorus of people calling the dance ‘inappropriate’.

Others projected shame onto the dancers, labelling their routine as ‘sexualised’. Some commentators also projected opinions that the choreography was ‘degrading to women’.

101 Doll Squadron are a community dance squad with members from indigenous and multi-racial backgrounds specialising in reggae, afrobeats and hip hop. A Murdoch owned newspaper, The Daily Telegraph – blew up pictures of the dancers on their front page and shamed the dancers in a double splash.

Inevitably, there has been a backlash over the policing of women’s bodies and women dancing. In addition, the dance troupe themselves have complained about the negative media coverage.

When asked what they thought about the reaction, members of 101 Doll Squadron said it was the media coverage that had been most harmful. The troupe accused ABC of “deceptive editing” to falsely include shots of military dignitaries in the video and “shooting from angles which could not be seen by the audience”.

101 Doll Squadron’s statement read “We found this very creepy and reflects more on the ABC’s camera operator and their need to sexualise these women and their dance piece for their own gratification”.

How did the clip go viral?

It emerged that footage had been edited by an ABC reporter who then shared the video on Twitter. The clip cut shots of the women’s dance with unrelated stone-faced reactions of attending military leaders. The tweet was later deleted, but it apparently quoted a government MP bemoaning a fall in defence force standards.

Later it surfaced that the footage had been wrongly edited, with ABC quickly issuing an apology.

Whatsmore, the Navy said that none of the officials or dignitaries had actually seen the performance because it had occurred as part of the wider entertainment before they had even arrived. The rest of the event contained the typical pomp and ceremony of brass bands, speeches, and marching.

However, Prime Minister Scott Morrison still found it necessary to say that ‘standards have failed’, but he also criticised the ABC’s ‘misreporting’.

The dance has since been discussed and debated on every mainstream television channel in Australia, causing a Twerking sensation. Sadly, the dance troupe have said they’ve been subjected to trolling and attacks online. They also feel ‘threatened and exploited’ as a result of the attention.