A terror suspect is in custody and four people injured- but none critically- after an explosion rocked one of New York’s busiest transport hub. The explosion in the passage way connecting Times Square and Port Authority subway stations was captured on CCTV. https://twitter.com/NYCityAlerts/status/940209031532220418?ref_src=twsrc%5Etfw&ref_url=https%3A%2F%2Fwww.nytimes.com%2F2017%2F12%2F11%2Fnyregion%2Fexplosion-times-square.html And the New York Times are reporting that the bomber had been […] 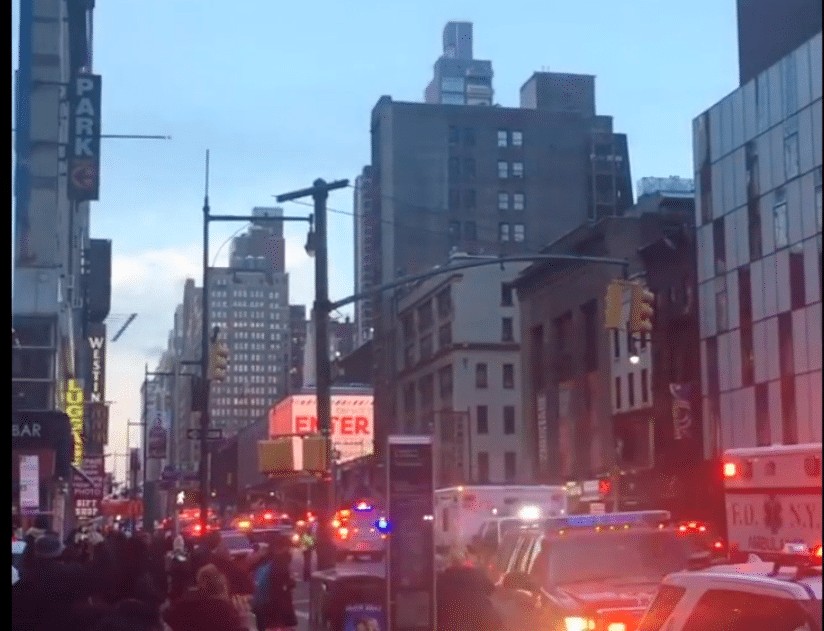 A terror suspect is in custody and four people injured- but none critically- after an explosion rocked one of New York’s busiest transport hub.

The explosion in the passage way connecting Times Square and Port Authority subway stations was captured on CCTV.

And the New York Times are reporting that the bomber had been wearing the explosive device which went off after police officers had partially stripped him.

The explosion terrified Monday morning commuters at around 7.30am local time, and caused chaos as journeys were diverted and the busy Port Authority bus station closed too.

The New York Police commissioner confirmed that the blast was an attempted terrorist outrage.

Early reports suggest the device was a homemade pipe bomb that went off unintentionally and may have only partially detonated.

Mayor Bill de Blasio also told a news conference that the incident was an attempted terrorist outrage, and that no other explosive device was discovered.

“Our lives revolve around the subway,” said the New York Mayor. “The choice of New York is always for a reason, because we are beacons of the world. And we show that a society of many background and many faiths can work.”

Last month Sayfullo Habibullaevic Saipov was charged with murder and terror-related charges, after New York’s deadliest terror attack since 9/11. Eight people died and a dozen were injured after a truck mowed down pedestrians on a cycle path near the World Trade Center site on Halloween.
MORE: 50 – 60 people caught in panic stampede after blast says eyewitness
Tags: headlineUS
Please login to join discussion