With many officials reportedly still working from home, Mr Johnson has previously railed against the “post Covid manana culture” in the Civil Service. 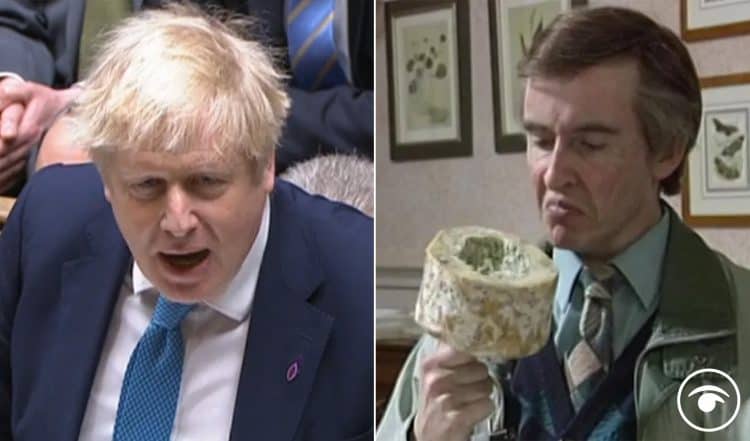 The PM has waded into the working from home debate. It comes as Jacob Rees-Mogg declared war on ‘three-day week for civil service.’

Johnson said working from home does not work.

However, it was pointed out by Mike Galsworthy that might be a tad hypocritical, he tweeted: “Remind me where Boris Johnson works from…”

The Prime Minister said staff were “more productive, more energetic, more full of ideas” when they are in the workplace alongside their colleagues.

The PM said people get distracted and “hack off a piece of cheese” from their fridge, yep you read it right.

“My experience of working from home is you spend an awful lot of time making another cup of coffee and then, you know, getting up, walking very slowly to the fridge, hacking off a small piece of cheese, then walking very slowly back to your laptop and then forgetting what it was you’re doing,” he told the Daily Mail.

In contrast, he said that getting those workers who are continuing to operate from home back into the office would drive up productivity.

“It will get our city centres moving in the weekdays and it will be good for mass transit. And a lot of businesses that have been having a tough time will benefit from that,” he said.

“We need to get back into the habit of getting into the office. There will be lots of people who disagree with me, but I believe people are more productive, more energetic, more full of ideas, when they are surrounded by other people.”

With many officials reportedly still working from home, Mr Johnson has previously railed against the “post Covid manana culture” in the Civil Service.

Ministers have publicly blamed large-scale home working for the backlogs in the Passport Agency and the DVLA.

Earlier it emerged that Mr Johnson had instructed ministers to cut 90,000 civil service jobs, potentially saving £3.5 billion-a-year, as the Government looks for measures to ease the cost of living crisis.

Unions have warned they could take strike action, but the Prime Minister defended the move, telling the Mail: “We have got to cut the cost of government to reduce the cost of living.

“Every pound the Government pre-empts from the taxpayer is money they can spend on their own priorities, on their own lives.”

Mr Johnson also said that he was ready for a fight with “leftie lawyers” seeking to challenge the Government’s controversial plan to offshore the processing asylum applications to Rwanda.

He said the the first 50 “illegal entrants into this country” have already been served notice that they will be sent to the African nation within a fortnight.

He added: “There’s going to be a lot of legal opposition from the types of firms that for a long time have been taking taxpayers’ money to mount these sorts of cases, and to thwart the will of the people, the will of Parliament. We’re ready for that.

“We will dig in for the fight and you know, we will make it work. We’ve got a huge flowchart of things we have to do to deal with it, with the leftie lawyers.”

Asked if he might respond with a review of the European Convention on Human Rights, Mr Johnson he said: “We’ll look at everything. Nothing is off the table.”