Coronavirus infections are dropping across the UK, with the R number at 0.6 to 0.9. 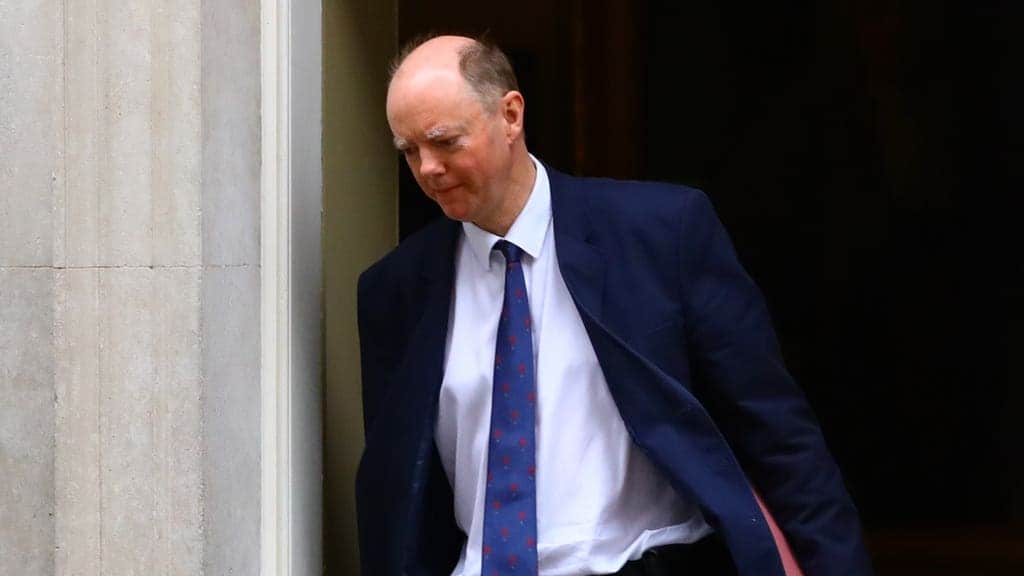 Professor Chris Whitty is said to be “very unhappy” with the idea of a “big bang” reopening of schools, according to Guardian reports today.

The chief medical officer for England is reluctant to put his name to a public show of support for the policy this week.

Under new plans all 10 million children and staff will return to schools in England on 8th March as part of the roadmap for easing national lockdown restrictions.

It was hoped that Whitty would make a public statement of support for the policy to reassure parents and teachers about safety, but so far he has been reluctant to provide an endorsement.

Instead his support has been described as “lukewarm” and he is expected to say it is down to politicians to make the final call on the timing of school reopenings.

An education source said they believed the row could be resolved, adding: “No 10 will come up with a formulation of words that Whitty can live with.” A government spokesperson has also said the claims were “categorically untrue”.

Coronavirus infections are dropping across the UK, new data suggests, as a study found that giving doses of the Oxford/AstraZeneca vaccine 12 weeks apart improves protection.

Around one in 115 people in private households in England had Covid-19 between February 6 and 12, the Office for National Statistics (ONS) said, down from around one in 80 people from January 31 to February 6.

Meanwhile, in Wales, around one in 125 people are estimated to have had Covid-19 between February 6 and 12, down from one in 85 previously.

The data, which does not cover care homes and hospitals, is based on swab tests from thousands of people regardless of whether or not they have symptoms.

It comes as new analysis from Oxford University published in The Lancet confirmed that a single dose of the AstraZeneca vaccine offers 76% protection against Covid-19 from 22 days after vaccination, and that this had not waned by the three-month mark.

The UK policy of leaving up to 12 weeks between doses also resulted in a higher efficacy overall, the study found.

There was 81 per cent protection when three months was left between the two doses, compared to 55 per cent for up to a six-week interval.

The Oxford team is still urging people to have two doses of the vaccine because they say it is not yet clear how long protection with a single dose may last.

Meanwhile, Government scientists put the R – the number of people an infected person will pass coronavirus on to – at 0.6 to 0.9 for the UK, compared to 0.7 to 0.9 in the previous week.

The lower end estimate is at its lowest point recorded by the scientists, and the R is below 1 in all regions of England.

However, the experts warned that “prevalence of the virus remains high, so it remains vital that everyone continues to stay at home in order to keep the R value down”.

Earlier, top scientific advisers said vaccines were having an impact on the pandemic, as Prime Minister Boris Johnson prepares to publish his road map out of lockdown on Monday.

Professor Adam Finn, from the University of Bristol and a member of the Joint Committee on Vaccination and Immunisation (JCVI), said “everything’s moving in the right direction” when it comes to how jabs are working.

He told BBC Radio 4’s Today programme: “We’ve now got to the point with the study we’re doing in Bristol where we can say with certainty that there is definitely an effect.

“It’s just hard to put an exact number on it at this point because… the numbers of cases coming through are still building up, the number of people who’ve been vaccinated are still going up, but it’s becoming clearer for the Pfizer vaccine, which we’ve been using for a month longer, since early December, and it’ll take slightly longer for us to get a firm handle on just how well the AstraZeneca vaccine is preventing hospitalisations too, but they’re definitely doing the job.”