The Bats Ukraine team had to find a way to keep the creatures cool and dark so their hibernation wasn't interrupted early, while shelling continued. 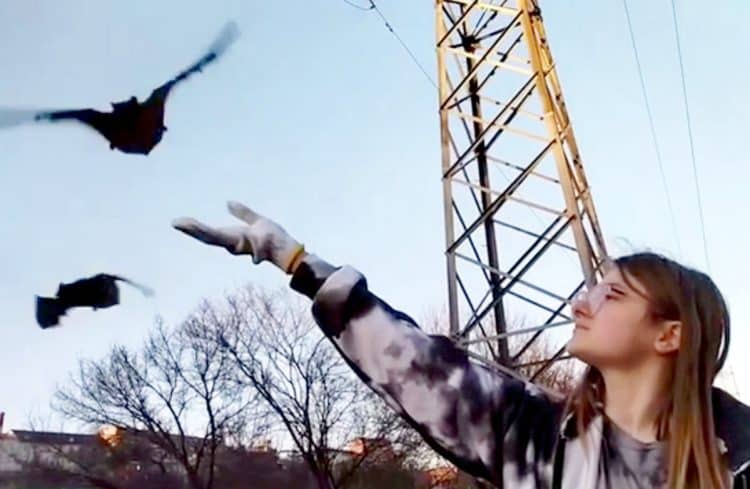 A charity worker releases the bats from a bag. Credit;SWNS

Ukrainian wildlife charity volunteers who had to store hibernating bats in their kitchen refrigerators during Russian bombing have set them free.

The Bats Ukraine team had to find a way to keep the creatures cool and dark so their hibernation wasn’t interrupted early, while shelling continued in Kharkiv.

This week they began their mission to release 93 of the rescued bats, which they recovered from a building site in Dnipro when Russia invaded.

The videos show many of the small bats being released by the team, as haunting air raid sirens can be heard in the background.

A spokesperson for the rescue team said: “Immediately after we left the office our city was being heavily bombarded.

“But we are safe and alive, and took care of our bats on rehabilitation.

“Now the warm weather has finally come, we are releasing groups of bats each evening this week – they will easily find a way to the nearest forests.

“No living creature is safe now in this part of Ukraine.

“But for our bats it is the best option – to fly and to live.”

The noctule bats recently woke for spring after hibernating through the trauma in the fridges.

Since waking they have been fed to get their weight and strength back up before being released.

The Bats Ukraine team will release dozens of the rescue bats over the next few days.

It has rescued over 3,000 bats this winter, thanks to its team of volunteers, vets and biologists – and is the only emergency bat rescue charity in Ukraine.

You can support the charity by donating at www.patreon.com/batsukraine or see more of their work at @bats_ukraine on Instagram.

Related: Dog walkers being urged to put their pet’s waste in ‘Poo Tins’