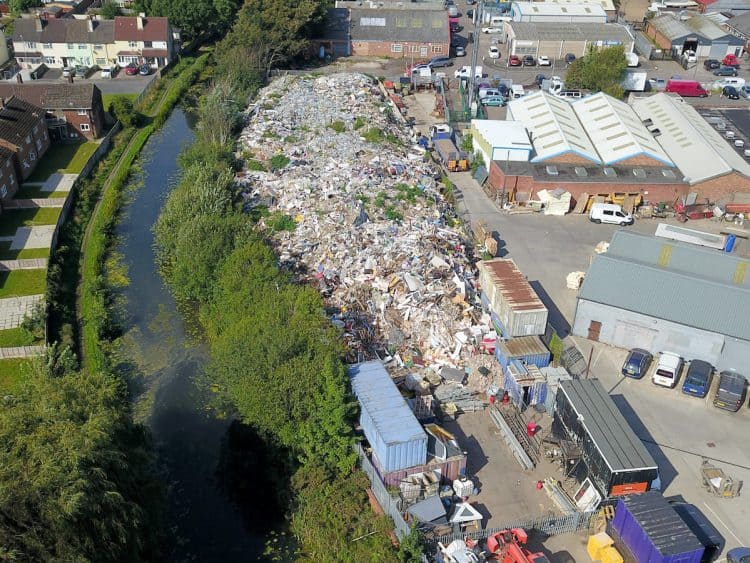 Residents are fuming after a huge 32ft (10m) mountain of rubbish was dumped near their homes – which has now grown so big it can be seen from space.

Homeowners living in Willenhall, West Mids., say they are fed-up after a nearby industrial estate became a dumping ground for fly-tippers three years ago.

They claim nothing has been done to rectify the problem and the towering pile of waste has now grown so high it can be seen on Google Earth.

The pile continues to expand with items including metal, furniture, children’s toys and household waste repeatedly being dumped at the Arrow Industrial Estate.

Neighbours are once again calling for action to be taken amid fears for their health and concerns the enormous rat-infested mound is a fire risk.

Mum-of-two Gina Howells, 34, who lives nearby, said: “We’ve kicked up a fuss in the past but nothing appears to have been done.

“Once again we find ourselves in the position of asking for help because the problem has not been sorted after all this time.

“It can be seen on Google Earth, so it’s basically visible from space. It’s that big and nobody seems to care despite it being a health and fire risk.

“It absolutely stinks and we’ve seen rats running about. I’m worried for the health of my children and don’t understand how it has been allowed to grow this big.

“It’s left our area looking like a Third World slum.”

Firefighters previously spent hours tackling a blaze when the rubbish broke out in flames in April 2020.

One resident, who didn’t want to be named, said her own respiratory problems had been exacerbated over time by the huge rubbish pile.

She said: “I have respiratory problems, which my consultants have said could have been made worse over the last few years.

“We don’t know who owns the site and we were never informed that it was going to be a recycling plant.

“We saw mobile units, which were stacked about four high and we complained about that because it was just creating a mess.

“We thought they were moving off the site, but then all this came and it’s just got bigger and bigger and the various fires over the years have not helped.”

Mum-of-five Angie Haddor, 46, who lives two streets away, said: “I think there was originally a recycling plant there but they went into receivership and everything was dumped there.

“Kids go to school past it, I have to walk past with my son.

“I think they are fly-tipping there as well because the pile just keeps getting bigger – there are toy cars on top.

“It shouldn’t be there and smells horrendous. It’s awful for the environment. It’s huge and horrible.

“I can’t understand why no one’s doing anything about it. The council shouldn’t have let them leave so much rubbish there.

“It’s a health hazard and there are rats.”

Walsall Council said the authority had served the landowners with an enforcement notice in February requiring the site be cleared by the end of May.

But the owners have appealed the action, saying they need more time to clear the site.

Shortheath Councillor Sarah-Jane Cooper said “The owner of the site has lodged an appeal, meaning that they won’t be able to clear up the site by the end of May and they want an extension, which could mean as much as six months.

“It’s been nearly two years, so we’re trying to see what we can do stop them in their appeals as we don’t want the residents to live through another six months of this.

“The residents and businesses around there have made it very clear what they think of this and they just want someone to take responsibility.”

A Walsall Council spokesperson said: “A planning enforcement notice was served to the owners of the site on the Arrow Industrial Estate on February 25, 2022.

“The owners of the site lodged an appeal with the Planning Inspectorate seeking an extension of time to complete the work needed.

“Walsall Council will shortly carry out a consultation exercise which will allow interested parties to make their views known to the Planning Inspectorate.”

Related: Kick them when down? Charity slams Govt over proposed fines for beggars