Timur Miroshnychenko couldn't hide his emotion as he covered the contest from a bomb shelter in Ukraine. 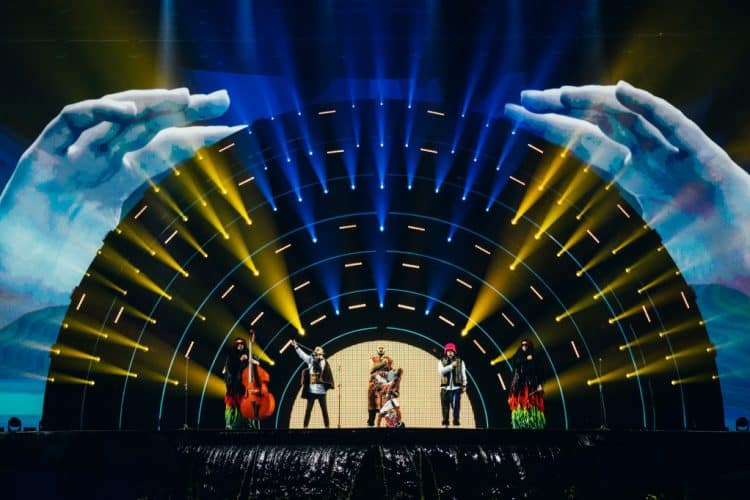 The reaction of Ukraine’s answer to Graham Norton has gone viral on social media after the country pulled off an incredible win in the 2022 Eurovision Song Contest.

Folk-rap group Kalush Orchestra secured the win on an emotional night in Turin, with the public vote adding 439 points to their score.

The act have been the frontrunners since Russia’s invasion – which prompted organisers to ban the country from competing.

Receiving the coveted trophy, Kalush Orchestra said: “Thank you for supporting Ukraine. This victory is for every Ukrainian. Slava Ukraini.”

During their performance, which combined rap and Ukrainian folklore, the group were dressed in elaborate outfits, including long multi-coloured fringed ensembles.

“Next year Ukraine will host Eurovision!

“For the third time in its history. And I believe – not for the last time.”

In a bunker in Ukraine, with plaster peeling off the wall and a single bulb lighting the room, Timur Miroshnychenko responded to the win in his own special way.

Since 2007, Miroshnychenko has either presented or commentated on every Eurovision contest for Ukrainian television, making him the country’s answer to Graham Norton.

But this year was rather different.

Forced into a bomb shelter to present, the broadcaster was overcome with emotion when the result was announced.

His reaction has since gone viral, with this video already racking up tens of thousands of views.