“They need to stop taking their hounds out into the countryside as this is surely the only way to avoid our wildlife being killed.” 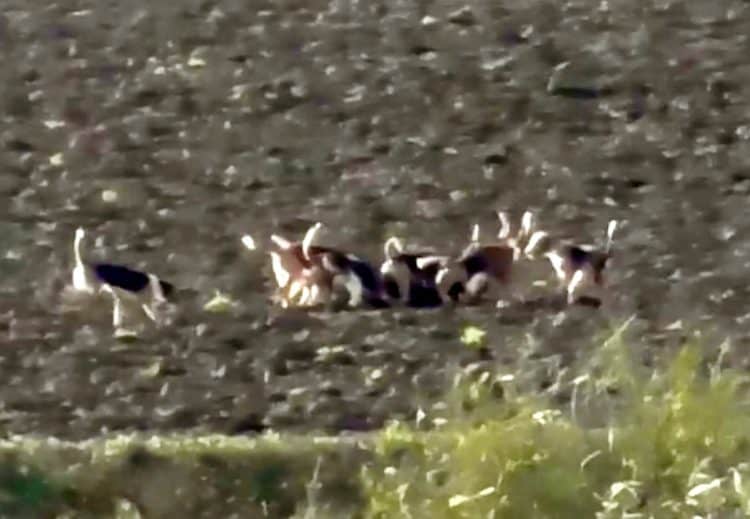 Footage shows the shocking moment a pack of dogs chase a deer and tear it to pieces during a traditional Boxing Day hunt.

Video shows at least ten hounds chasing a small deer over a ploughed field near Preston on Stour, four miles south of Stratford-upon-Avon.

The deer can be seen desperately trying to escape the dogs before one launches itself at the animal while another clamps its jaws around its throat.

In sickening scenes, the rest of the 16-strong pack of hounds then tear the defenceless deer apart before running off with chunks of the dead animal in their mouths.

A man on a quad bike is then seen driving to the field and shoos away the baying dogs.

He then appears to look around him before taking off his jacket which he uses to wrap
up the deer’s bloody remains before carrying it away.

A spokesperson for West Midlands Hunt Saboteurs said “Serious questions need to be asked of the Warwickshire Hunt.

“This is the second time this month we have filmed the Warwickshire Hunt killing our wildlife and third time this hunting season.

“When asked for a response last time they claimed it was an unavoidable ‘accident’.

“How many more unavoidable ‘accidents’ are they going to have before the end of the season?

“It’s clear to anyone that the Warwickshire Hunt hounds are completely out of control, killing anything that moves.

“If we are to believe the Warwickshire Hunt that it is unavoidable then no wildlife is safe as long as their hounds are on the loose in the countryside.

“They need to stop taking their hounds out into the countryside as this is surely the only way to avoid our wildlife being killed.”