One Tory suggested that wearing of face coverings to provide protection from the virus is “mumbo jumbo”. 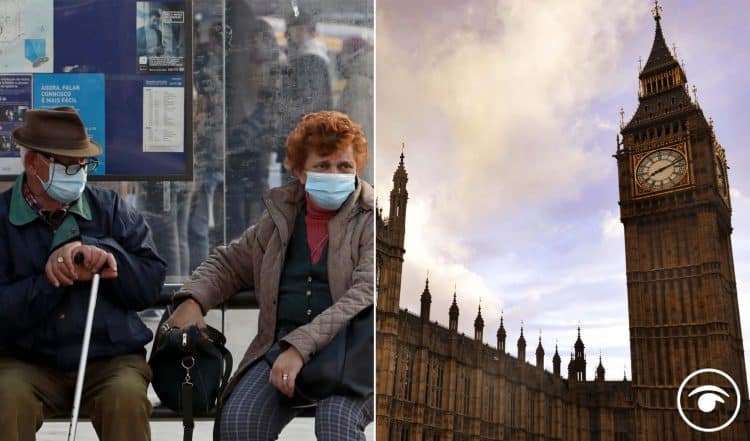 Measures to combat the new Omicron variant of coronavirus come into force on Tuesday as the Prime Minister said Covid-19 vaccines and boosters remain the best line of defence.

Face coverings are again compulsory in England in shops and settings such as banks, post offices, hairdressers, and public transport, while all travellers returning to the UK must take a PCR test and self-isolate until they receive a negative result.

All contacts of suspected Omicron cases must self-isolate, regardless of their age or vaccination status.

However, a group of Conservative MPs have continued to shun mask-wearing yesterday in the House of Commons, despite tougher measures for the public in response to the new Omicron variant.

A handful of backbench Tories appeared maskless in the Commons chamber yesterday, with one openly shouting his opposition to pleas from Labour MPs to put one on and another suggesting the wearing of face coverings to provide protection from the virus is “mumbo jumbo”.

Face coverings are already compulsory for staff, contractors and journalists but not MPs, although they were earlier this month advised to wear them.

Conservative former minister Sir Desmond Swayne said: “Over the last few months there has been a useful controlled experiment on face coverings given the different policies pursued in Scotland and England. What estimate has he made of the result? It’s mumbo jumbo isn’t it?”

The Health Secretary Sajid Javid said that if Sir Desmond “is suggesting that there are mixed views on the efficacy of face coverings in helping to fight this pandemic, he would be right”.

Labour MP Peter Kyle (Hove) could be heard shouting at the unmasked Tory MPs to “put it on”, with Alec Shelbrooke (Elmet and Rothwell) replying: “No.”

Dr Allin-Khan added: “If masks had been mandatory, it’d have been harder for this new variant to spread.”

She said the Government’s “flip-flopping on masks has created confusion” across schools, colleges and universities before adding: “The Prime Minister is not the best person to tell people to wear masks when he can’t even be bothered to wear one himself when he goes into a hospital full of vulnerable patients.

“And can I ask the Secretary of State when Conservative backbenchers will start wearing their masks?”

Tory MP Mr Shelbrooke could be heard shouting: “When we have to.”

And for the second time Dr Rosena Allin-Khan was asked to about her ‘tone’ in the House.

Related: Labour hits out at Desmond Swayne after he claims Covid mortality figures have been “manipulated”