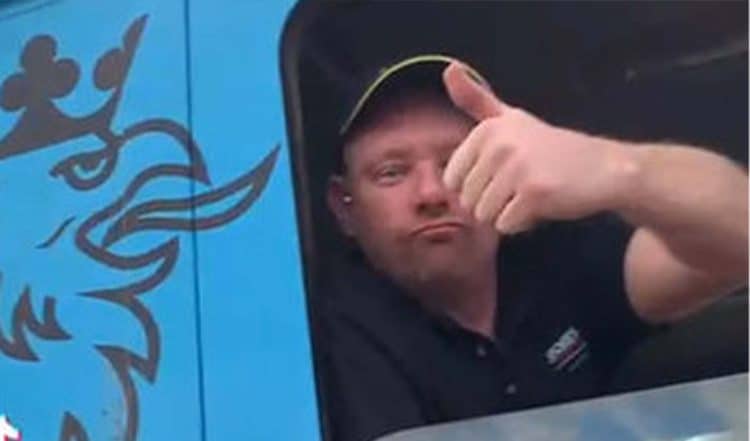 A lorry driver who racially abused an NHS worker has been fined after a shocking video of him being confronted after his racist tirade was seen by more than 1m people.

Adnan Hussain, 25, said he was “traumatised” following the incident where trucker Nicholas Clayton, 51, had called him a “P*ki bastard” and said “You stink like sh*t.”

Clayton was found guilty of causing alarm or distress by using threatening or insulting words in an incident that was racially and religiously aggravated.

In the shocking video, recorded after his vicious rant, Clayton nods and agrees when Adnan accuses him of using racist language.

Adnan, who has since left his role at the NHS, said he had stopped at some traffic lights in the Grimesthorpe area of Sheffield, Yorks., when Clayton had first approached him.

He said the lorry diver had “thumped” on his window before beginning a foul mouth tirade directed towards Adnan and his 61-year-old passenger.

Adnan, now a civil servant and part-time model, then went to the tucker’s workplace where he found him sitting in his cab and confronted him about his behaviour.

During the video, which Adnan filmed, Clayton accepted using the racist language before asking his friend: “Why did he drive like an idiot?”

Last week, the trucker received a fine at Sheffield Magistrates court after being found guilty of causing alarm or distress by using threatening or insulting words – in an incident that was racially and religiously aggravated.

Recalling the incident after the hearing, Adnan said: “I was just shocked, I was traumatised that someone had just come to my car and said that to me in the middle of traffic.”

“I didn’t do anything, and there was nothing from my end for someone to get so angry to attack the colour of my skin and my character, my ethnicity.”

Adnan said the incident took place on February 26, 2021, during his day off, when he was driving in Sheffield with an elderly companion.

He said: I was approaching a roundabout where two lanes going into one. There was a red car behind my car, and then behind that was the HGV driver.

“As I approached some traffic lights, and a man just approached me. He was parked in the middle of the traffic.

“He comes and thumps on my window, and I open it a little crack. I had a friend with me as well – who was an independent witness.

“Through that, I heard him go: “P*ki b*stard! Get back to your own country! And you stink like shit.”

“I was just shocked, I was traumatised. Someone had just come to my car and said that to me in the middle of traffic.

“There was no conversation between us except for him shouting those racist remarks.”

After a discussion with his friend, Adnan said he decided to go to the lorry driver’s place of work, where they found him sitting in his cab.

He said: “We went to the lorry company. My friend knew the whole of Sheffield as he’s a cab driver.

During the confrontation, Adnan can be heard telling the tucker: “This guy – police matter – he swore at me. He told me to get to my own country.”

Clayton then nods his head and responds, “yep” to the accusation, before telling Adnan that his name is “Dick Turpin”.

Adnan later reported the matter to South Yorkshire police, who he praised for their response in dealing with the distressing matter.

He said: “I do want to thank South Yorkshire Police because they have been amazing.”

“From the start, they gathered the evidence, and the process was easy. They were supportive.”

Clayton – who had pleaded not guilty – was fined £250 and ordered to pay a £34 victim surcharge and £250 costs to the Crown Prosecution Service following the guilty verdict.

His employer at the time, Brocklebank & Co Demolition Ltd, were approached about the incident and said they had “no comment at all”.