"He had the look of a naughty school boy being told off", one person said, while James O’Brien summed it up by simply writing: “Oof”. 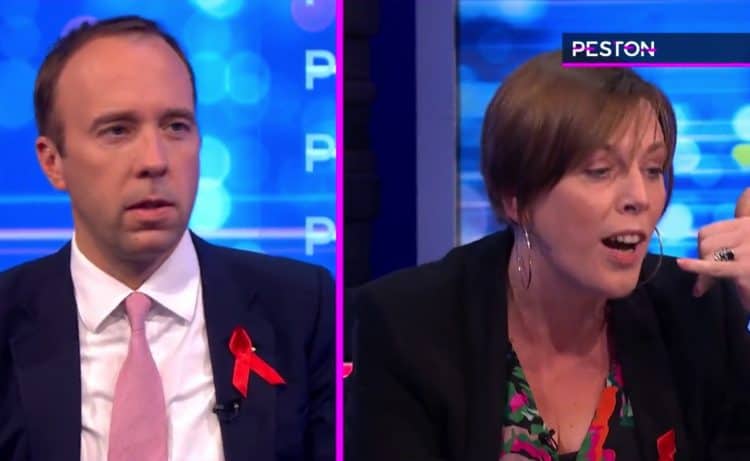 Matt Hancock admitted he had “blown up every part” of his life when he resigned from the cabinet after CCTV footage showed him breaching social distancing rules with an aide.

Asked on ITV’s Peston programme why he didn’t “resign on the spot”, the former cabinet minister said “the first thing I had to, that I focused on was my personal life”.

“When I focused on my professional responsibilities, I decided that I had to resign and that’s what I did,” he insisted.

However, that wasn’t the most humiliating part of the interview.

Speaking out about claims he helped the former landlord of his local pub Jess Phillips said: “What an absolute load of rubbish… did anybody else’s friends get a contract? Mine didn’t. None of my friends are on those lists.”

Hancock acknowledged that it was hard to get PPE last year as “the whole world was trying to get it”. Perhaps trying to flip it around, he said Labour party donors “got those contracts too”.

Interjecting, Phillips said: “We were trying to get that stuff, the owner of that company in my constituency was trying to get it into the government. I had endless phone calls… it’s funny because they were already a provider, however some people’s friends who weren’t providers somehow managed to get through the line.”

Twitter enjoyed the encounter, with LBC presenter James O’Brien summing up what we’re all thinking by commenting: “Oof”.

If that wasn’t bad enough for Matt, yesterday he was called out by Anneliese Dodds after he got very annoyed at claims his mate the landlord got a Covid contract.

He was asked to return to Commons and explain why he misled Parliament.

Jolyon Maugham picked up the story with a blistering thread.

Related: Watch: Tory MP’s facemask self-own will make him cover his face… with his hands