He said people in the city have been forced to collect wood so they can cook on a fire and gather snow to melt for water. 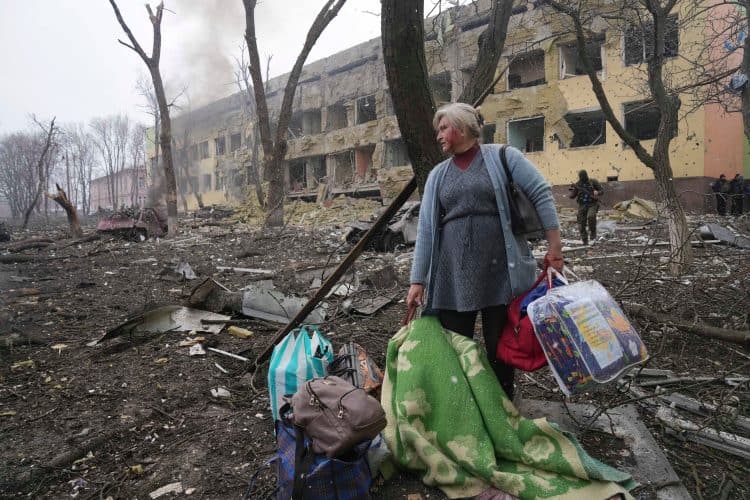 The “despicable” bombing of a maternity hospital in Ukraine is a war crime committed by Russian troops, the UK’s armed forces minister has said. The Russian strike killed three people, including a child.

Ukrainian President Volodymyr Zelensky said the strike in Mariupol was part of a “genocide” on his people.

Three people, including a child, were killed in the attack, according to the besieged city’s council.

Defence minister James Heappey told BBC Radio 4’s Today programme that UK intelligence believes the strike came from artillery rather than the air, but that Britain is “still looking at exactly (what happened)”.

On today’s Good Morning Britain hosts Ben Shephard and Ranvir Singh spoke live with the Deputy Mayor of Mariupol, Sergei Orlov, following the devastating bombing of a maternity hospital in the region.

Sergei began: “It’s an absolutely awful situation for us and we can not imagine… We do not know how to tell how this can be the 21st Century.”

He continued: “This morning we hope it will become a kind of ceasefire… We are ready to evacuate about 2,000 citizens, but there is no ceasefire unfortunately. Ten minutes ago we received information that Russian military aircraft go directly over Mariupol and they bombed the centre of the city.”

Sergei also spoke about how this is the ninth hospital to be destroyed and there is now nowhere to put injured citizens, as well as having to bury 47 people in a mass grave they built themselves, without having identified all of the bodies.

He confirmed there’s no electricity, water or sanitary supply in Mariupol and explained that people are collecting wood so they can cook on a fire, and also they are collecting snow to melt for water.

To watch the show in full visit itv.com/hub

Related: ‘Playtime is over’: Nick Ferrari tears into government for shambolic response to Ukraine conflict