Stiller told President Zelenskyy: "It's great honour for me. You are my hero. You quit a great acting career for this." 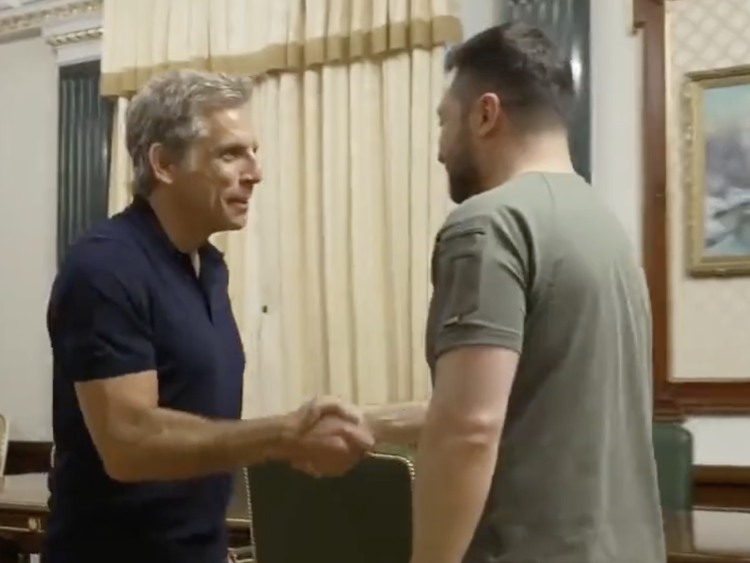 Ben Stiller has said “seeking safety is a right and it needs to be upheld for every person” during a visit to Poland and Ukraine, where he met those affected by the ongoing war with Russia.

Now he has met up with President Zelensky and it is a wonderful moment.

The American actor, 56, arrived in Poland on Saturday and was pictured in the large south-eastern city of Rzeszow, close to the border, speaking to aid workers in a storage facility.

Stiller, who is a long-term Goodwill ambassador for the United Nations High Commissioner for Refugees (UNHCR) – the UN refugee agency – has since visited Ukraine on World Refugee Day.

In a video posted to his Instagram account, Stiller said: “Hey, I’m Ben Stiller, and I’m here in Ukraine. I’m meeting people who’ve been impacted by the war and hearing how it’s changed their lives.

“War and violence are devastating people all over the world. Nobody chooses to flee their home.

“Seeking safety is a right and it needs to be upheld for every person.”

Stiller told President Zelenskyy: “It’s a great honour for me. You are my hero. You quit a great acting career for this.”

“Not so great as you,” he replied.

Stiller went on: “I feel that it’s hard to understand what’s going on here if you haven’t been here.

“We were talking about the actual impact of coming here. I just was in Irpin this morning, saw the level of destruction.

“You see it on TV, you see it on social media, it’s something else to actually see it and feel it and then to talk to people. We have talked to a bunch of people.”

However, one person remembered Ben Stiller from Extras by Ricky Gervais.