Jimmy Price, 25, was found guilty of causing unnecessary suffering to two dogs just a month after a gruesome video emerged of him knifing the deer 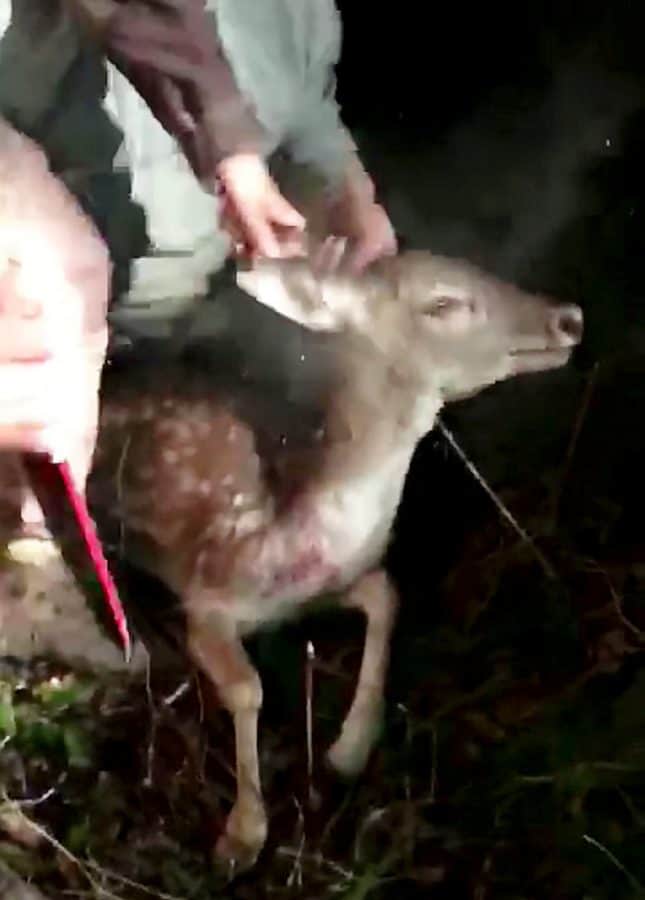 Two brothers have been convicted for mistreating animals after one repeatedly stabbed a deer and the other let a bay horse starve to death.

Jimmy Price, 25, was found guilty of causing unnecessary suffering to two dogs just a month after a gruesome video emerged of him knifing the deer.

The shocking video shows the dad-of-two puncturing the deer’s throat before his pal grabs the blunt knife and saws through the helpless animal’s neck.

Jimmy’s brother, Danny Price, was sentenced in the same court after he let a bay horse starve to death.

The qualified jockey told magistrates’ he thought the animal was the responsibility of the person he was selling it to at the time.

Jimmy Price, a convicted thief, was found guilty of causing unnecessary suffering to the dogs and a horse, which had belonged to his late father.

A video played to the court showed the dogs, Scout and Tramp, untethered and unfed at his home, Forstal Farm, in Loose, Kent.

A voice in the video was heard to say: “If they run away good luck to them, I tell you what, you’re the wickedest fella I’ve ever seen in my life.”

Tramp and Scout gained 25 and 45 per cent in body weight respectively within seven weeks of RSPCA staff feeding them properly.

Price was jailed for seven and a half months and will spend half that time in custody.

He was also banned from keeping dogs for five years and ordered to pay £5,115. The jail term followed Price’s grisly deer stabbing in December.

Commenting on the footage, RSPCA prosecutor Rowan Morton said: “It’s very difficult to even explain the gravity of what the video shows.

“There are a group of four males that can be seen with a deer. Jimmy Price is seen stabbing the deer multiple times in the throat while others shout at him to stab it.

“It’s very graphic and upsetting, there was no doubt that animal was caused significant pain and suffering.”

Jimmy’s brother Danny was convicted of after his bay horse was found dead next to a hay bale during the RSPCA raid in March 2019. It had starved to death.

Magistrates heard the 29-year-old had stopped looking after the horse because he was in the process of selling it and thought the new owner was responsible for its care.

A third man, horse salesman Samuel Powell, was also convicted on Friday alongside the two brothers, after four of his horses were found emaciated in the same RSPCA raid.

Powell told the court the horses were in that state because he was rehabilitating them.
He also claimed to “save lives” through his work in which he would buy the horses to sell on “for profit.”

RSPCA agents seized three of Powell’s horses in the March raid, just two months after officials rescued a mare and its foal from the 34-year-old.

He was convicted last year convicted of causing unnecessary suffering to a foal which was seen hauling a cart of people at a horse fair.

Four of the horses were emaciated and the foal had breathing problems, fleas and was described as “very thin.” A Shetland Pony was also found with a deep cut across the nose.

Addressing Magistrates on Friday, Powell said: “I will buy horses that have not been treated properly. When I get them I feed them, look after them and rehabilitate them.

Then I sell them for profit.”I like to think I sometimes save lives when I buy horses.”
Powell tried to get his trial postponed because his wife grew up with ‘big fat’ gypsy twins Joe and Billy Smith who hanged themselves.

The brothers, who were both tree surgeons, were found hanging side-by-side in woodland down a Kent country lane on December 28.

Magistrates took over an hour to consider the request, but eventually ruled against an adjournment.Powell was jailed for 26 weeks after previously pleading not guilty to five counts of causing unnecessary suffering to horses.

He was also banned from owning horses for five years and fined £5,000 The cases for all three men were heard together at Medway Magistrates’ Court on Friday, because they arose from the same RSPCA raid on Forstal Farm, in Loose, Kent, which took place March last year.

The charges related to different animals and each man was individually represented.

By Ben Gelblum, Gregory Kirby and Luke May