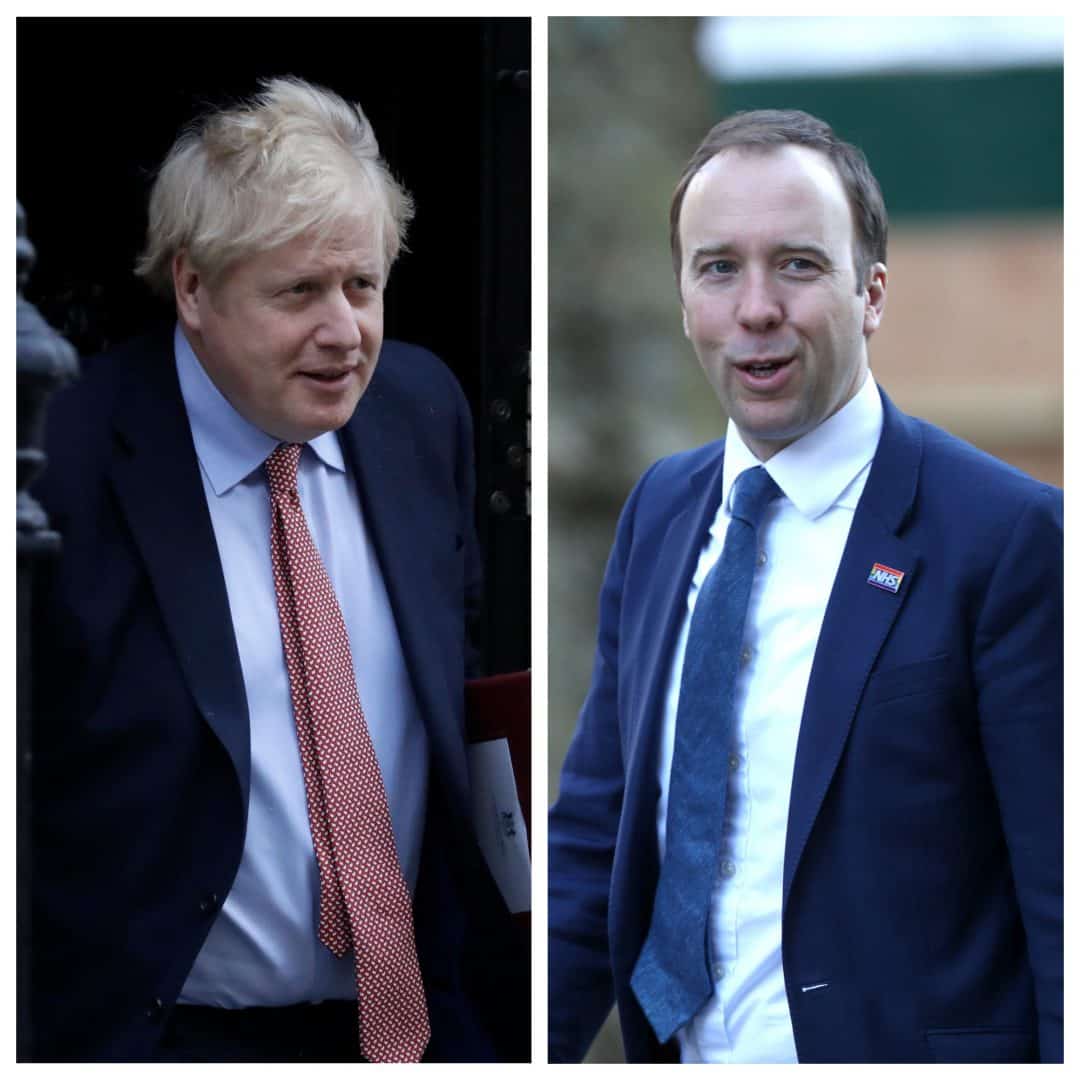 The UK has seen its biggest day-on-day rise in deaths since the Covid-19 outbreak began, as Boris Johnson and Matt Hancock said they have tested positive for the virus.

A total of 759 people have now died in UK hospitals after being diagnosed with coronavirus, while 113,777 have tested positive, the Department of Health and Social Care said.

Hundreds of thousands more people are thought to be infected.

It took 13 days for the number of deaths in the UK to go from one to just above 100.

It took a further eight days to reach the latest total of 759, analysis by the PA news agency shows.

The jump in coronavirus-related deaths in the UK from 578 to 759 is an increase of 181 – the biggest day-on-day rise and a 31 per cent jump on the figures released on Thursday.

It comes as the Prime Minister and Health Secretary said they were self-isolating after they tested positive for coronavirus.

Mr Johnson, who has a high temperature and persistent cough, said he would still lead the “national fightback” against the virus from his flat above Number 11.

The 55-year-old noticed that he had mild symptoms on Thursday afternoon and received the test results at midnight, Downing Street said.

His pregnant partner Carrie Symonds is not with the PM, and is reportedly isolating alone in Camberwell, south London, with the couple’s dog, Dilyn.

It is not known which close contacts have been tested, but Downing Street said the advice on social distancing had been observed in Number 10.

Sir Patrick tweeted that he has experienced no symptoms and has therefore not been tested.

Some scientists were critical of the fact the House of Commons has largely stayed “open for business”, enabling the virus to spread.

Professor Susan Michie, director of the Centre for Behaviour Change at University College London, said: “Whilst the PM was telling people to stay at home and keep at least two metres apart from each other, the House of Commons was open for business and face-to-face parliamentary activities were carrying on.

“Given the transmission routes of touching contaminated surfaces and breathing in virus-laden droplets, it should not come as a surprise to hear that the PM and Health Secretary have tested positive for coronavirus.

“There are many reasons why those in leadership positions, including in Government, should practise what they preach.”

In a video message posted to Twitter, Mr Johnson said: “I’m working from home and self-isolating and that’s entirely the right thing to do.

“But, be in no doubt that I can continue thanks to the wizardry of modern technology to communicate with all my top team to lead the national fightback against coronavirus.

“I want to thank everybody involved and, of course, our amazing NHS staff.”

Mr Hancock tweeted: “Fortunately for me the symptoms so far have been very mild so I’ve been able to carry on with the work driving forward the UK response.”

A spokesman for the Chancellor said Rishi Sunak has not had any symptoms and therefore has not been tested for coronavirus and is not self-isolating.

Michael Gove, Chancellor of the Duchy of Lancaster, has not been tested for coronavirus as he has not displayed symptoms of the virus, his wife Sarah Vine said on Twitter.

Meanwhile Radd Seiger, spokesman for the family of teenage motorcyclist Harry Dunn, said Mr Hancock “irresponsibly failed to socially distance himself” when they met him on March 18.

Mr Seiger claimed the Health Secretary had hugged the family and shaken his hand as they met at the Department for Health and Social Care to discuss the teenager’s death.

Earlier this week, it was announced that the Prince of Wales was also suffering “mild symptoms” of Covid-19.

On Thursday night Charles was seen for the first time since testing positive.

Clarence House posted a video in its Instagram Stories of heir to the throne Charles joining in with the round of applause for the NHS from Birkhall, his private home on the Balmoral estate in Scotland.

– GP Habib Zaidi, 76, who died at Southend Hospital in Essex, is feared to have become the first doctor in the UK to have died after contracting coronavirus.

– Sports Direct founder Mike Ashley has apologised for “ill-judged and poorly timed” emails after the businessman faced fierce criticism when he tried to claim Sports Direct was an essential operator for keeping the nation fit.

– UK supermarkets said they will use a Government database of 1.5 million vulnerable shoppers to help prioritise delivery slots.

– Labour deputy leadership candidate Angela Rayner announced on Twitter that she is self-isolating after suffering symptoms, while Duncan Selbie, the chief executive of Public Health England, is also self-isolating with symptoms.

– As of 1pm on Thursday, 27 prisoners had tested positive for coronavirus in 14 prisons.

– Fewer than half of acute and emergency staff are satisfied with the personal protective equipment supplied to them, a snapshot survey shows.

He added: “Coronavirus can and does affect anyone. Everyone be safe. Our own health depends on everybody else.”

On Thursday night Mr Johnson applauded the NHS outside Downing Street a couple of metres away from the Chancellor.

Downing Street has previously confirmed that Foreign Secretary Dominic Raab would stand in if Mr Johnson was too unwell to continue.

If Mr Raab was also ill, the PM has the power to delegate responsibility to any of his ministers.

He said: “Her Majesty the Queen remains in good health.”