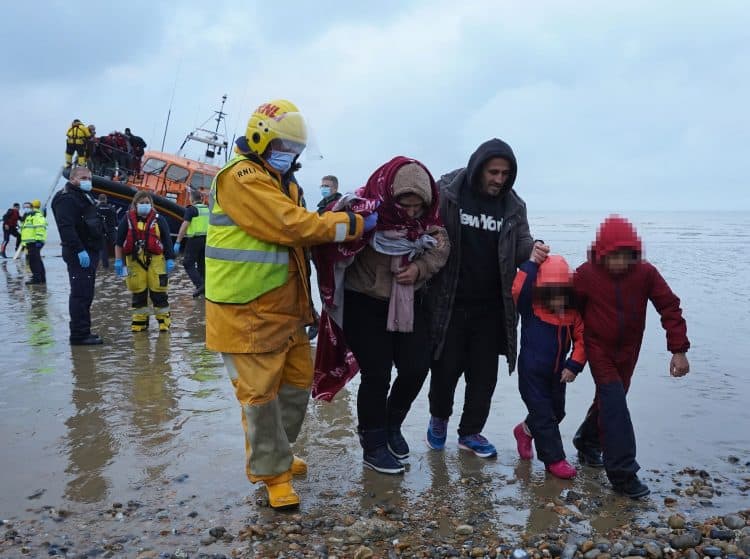 Social media trolls branded 27 refugees who drowned in the English Channel – including a pregnant woman and three children – as “terrorists, rapists and murderers”.

Nearly 100 Facebook accounts responded to a local newspaper article about the tragedy with a laughing emoji.

In response the Kent Messenger asked those who laughed at the deaths of nearly 30 people – including seven women and three children – who they did so and were met with abuse.

In total 96 users replied with a laughing emoji after comments on the Facebook post were switched off by the publication.

One Facebook account with a fake name told the reporter who questioned his response, “it’s a total joke mate. Thousands of murders [sic] rapists terrorists coming into our country daily. The government are traitors!!”.

When asked why people dying in the sea trying to get from France to Britain was funny, the man who went by the name of Internet meme ‘Ronni Pickering’, replied: “It’s great news [they drowned]! You support the c***s probably. F*** of [sic]. I hope every boat f*****g sinks.”

The man was asked how he came to this point of view and added: “[Those coming are] “rapists murders [sic] nonces terrorists and they are robbing our country left right and centre cos they come from f*** all and got no morals. Don’t like them never will there [sic] scum.”

When asked to back up his claims, he said to “go away and do your homework”.

Another Facebook user called Chantal said she laughed, “because our country looks after illegals before our own people!!!”.

One called Steve called the reporter a “jumped up little c***” for questioning his use of a laughing emoji and told him to “jog on”.

Chatham dad Steve added: “They should stay at home and stop f****** coming over here. Or do it through the right procedures the scum bags.”

When asked if 27 people – including women and children – dying had bothered him, he replied: “Not at all mate not my family and not my children,” adding another laughing emoji to the comment.

He was asked: “So would you laugh at anyone dying who you wasn’t related to?”

Steve responded: “Nope just them c***s. They are supposed to seek refuge in the first country they get to not travel through them to come to ours.

“Because of all the ***** my daughter can’t get doctors appointments because there is too many of them here now causing a strain on our NHS. There is veteran’s on the streets when there being put up in hotels [sic].”

Another man claimed all migrants do is “take jobs” and said “most of them that come here are in jail for murder or rape”.

When told asylum seekers are not allowed to work in the UK he replied: “F*** ’em.”

Some responded to the queries, then blocked the reporter when they did not like the follow up questions.

Among the at least 27 people that drowned six miles off the coast of Calais last week were seven women – including one who was pregnant – and three children.

The International Organization for Migrations said it was the biggest single loss of life in the Channel since it began collecting data in 2014.

The deaths sparked a war of words between Paris and London, both blaming the other for not doing enough to stop Channel crossings.

One man who survived the sinking told how both French and British authorities refused to come to their aid when they called for help – instead palming off responsibility on their cross-Channel counterpart.

More than 200,000 refugees live in the UK compared to the 3.1 million living in Turkey, which has the most in the world, according to official figures.

The UK’s intake of asylum seekers was 17th in Europe per head of population with over 70 per cent of people risking their lives in the Channel being granted asylum.

The Dublin Regulations – that Britain was part of when a member of the EU – required asylum seekers to register a claim in the first EU country they reached and for the decision of that country to be final.

Baron Kerr told the House of Lords last week schemes like the ‘Dubs’ Amendment – that states families have a right to stay together when making applications – are no longer in place.

The Channel tragedy came just weeks after Priti Patel’s Nationality and Borders Bill, which is currently passing through parliament, was launched proposing cracking down on migrant crossings and turning boats back towards France.

The Home Secretary told the House of Commons asylum applications should be made “legally through established routes”.

Some 3,187 Iranians came to the UK in the past 18 months – the largest single group – but only one got in through the official route as asylum applications have to be made once the applicant is on British soil.