There is no doubt that Team GB were hugely successful at the Rio Olympics and many people took to Twitter to celebrate, after they finished second in the medal table, seeing off China, the country with the biggest population in the world, who came a close third. The USA were the clear winners and were […] 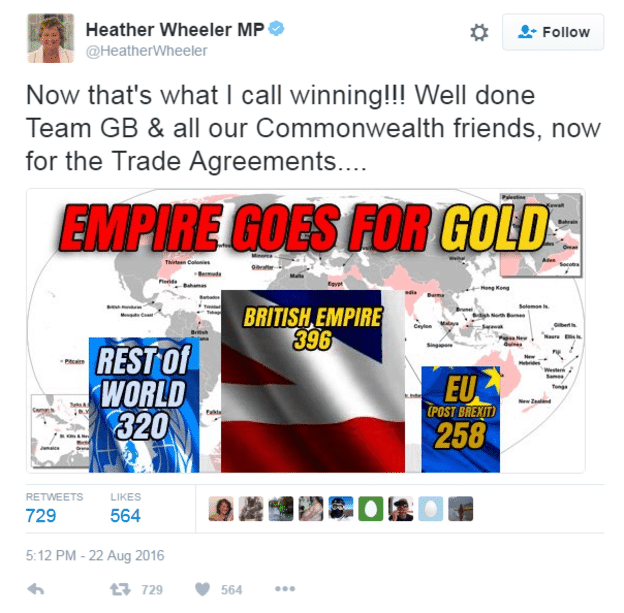 There is no doubt that Team GB were hugely successful at the Rio Olympics and many people took to Twitter to celebrate, after they finished second in the medal table, seeing off China, the country with the biggest population in the world, who came a close third. The USA were the clear winners and were the only country to reach treble figures in their medal tally.

However, one Tory MP may have taken her support for Great Britain a bit too far after she posted a Tweet, that showed a map with a medal table divided by “EU post-Brexit” “Rest of World” and “British Empire.” Then she Tweeted “Now for the Trade Agreements.” This Tweet has been branded deeply offensive and Tory MP Heather Wheeler’s post has prompted a huge backlash against her.

Wheeler, the MP for South Derbyshire, defended her post and said it was alight hearted joke in response to a previous Tweet she had seen, which showed the cumulative EU medal table.

David Lammy, Labour MP for Tottenham found the post “deeply offensive to so many people and their ancestors.”

Heather, who was a prominent Brexiteer, was asked why she mentioned the British Empire and she replied: “It was clearly a joke.”

Conservative MEP Daniel Hannan, who also campaigned for Brexit, tweeted in support of Ms Wheeler, saying: “This is Twitter! Any light-hearted remark will spark cretinous faux-outrage!”

The Twitter responses (below) do not appear to agree with Daniel’s claims.