"Waitrose Tommy" couldn't even locate Palestine on a map, one person said. 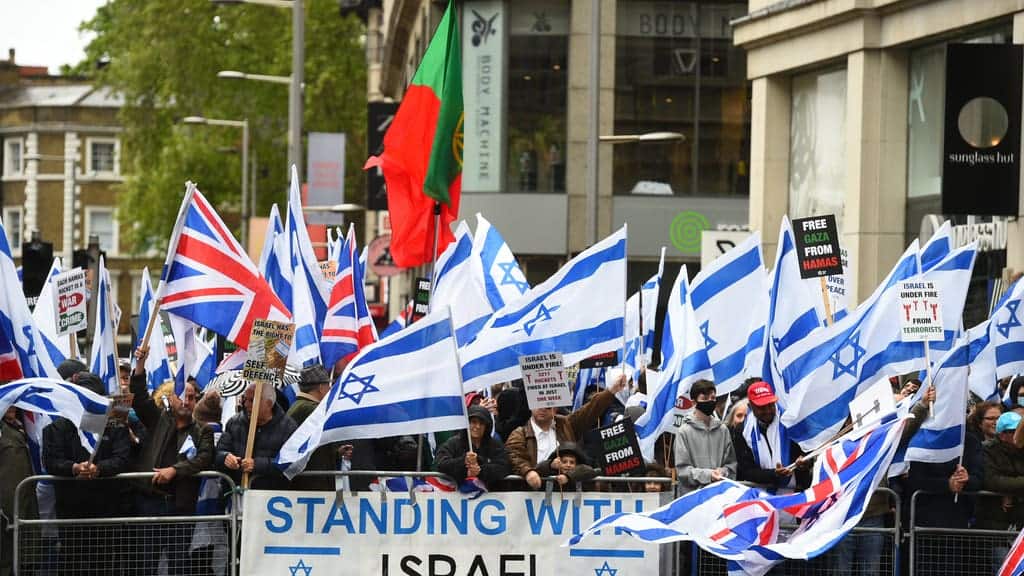 Tommy Robinson was trending on Twitter last night after the far right figurehead was spotted at a pro-Israel march in London.

Police officers were forced to step in yesterday after the large crowd of people, who congregated on Kensington High Street, were met by a small group of people chanting “free Palestine”.

The crowd waved Israeli flags and banners and chanted loudly, while a number of speeches were made.

A large police presence was in the area and a number of surrounding roads were closed off.

Placards bearing the messages “Free Gaza From Hamas” and “Israel has the right to defend itself” were held aloft as music was played loudly.

Some people could be seen on lampposts letting off blue smoke despite the heavy rain.

Footage from the demonstration circulating on social media appeared to show English Defence League founder Tommy Robinson, whose real name is Stephen Yaxley-Lennon, among the attendees.

Owen Jones tweeted that there is “not enough discussion about how Israeli apartheid and the racist oppression of the Palestinian people is cheered on by the far right”, while others tweeted that Robinson “wouldn’t be able to locate Palestine on a map”.

There’s not enough discussion about how Israeli apartheid and the racist oppression of the Palestinian people is cheered on by the far right, up to and including Trump, who mixed antisemitism with smearing women of colour like AOC as antisemites for supporting Palestinian justice https://t.co/IeBrbrYB7U

Responding to the footage, The Board of Deputies of British Jews said: “Stephen Yaxley-Lennon (aka Tommy Robinson) & supporters of far-right extremist organisations like the English Defence League are not welcome at our community’s events.

“Their message of hate and division must be confronted and defeated. We utterly reject their bigotry.”

Related: Starmer under pressure to fight for proportional representation