"The Telegraph's article is helping nobody and distorting the truth massively. They should not only be ashamed, but should learn the facts," he tweeted. 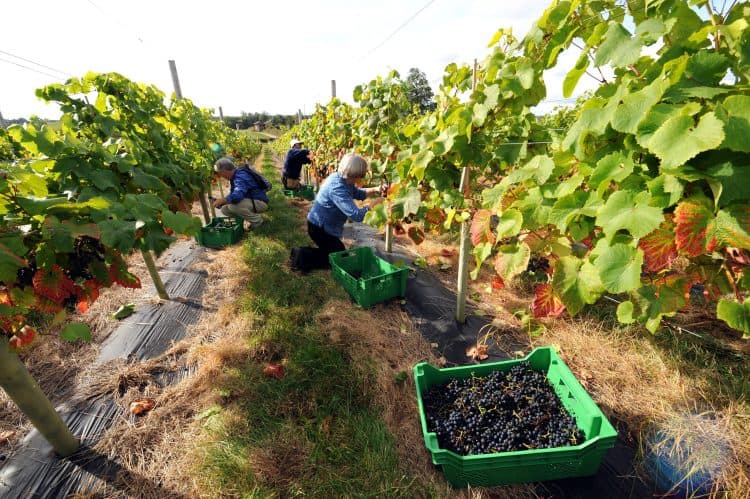 A Telegraph article published on the 17th October ran with the headline: “Why won’t Brits pick vegetables for £30 an hour? Agricultural wages are rising sharply, but farmers struggle to find staff. How hard can the work be?”

There is no doubt there is a shortage of farms workers. During the summer it was claimed Brexit caused a “massive hole” in the numbers of people coming to the UK to pick fruit in the summer months putting growers “on the brink.”

The numbers of seasonal workers applying to work at one Kent-based company were down 90% in the last two years and there are fears for the future.

Stephen Taylor, managing director of Winterwood Farms Ltd, said the labour market has got “tighter and tighter” over the last couple of years.

He said the impact of Brexit on the flow of workers to UK farms is only getting worse.

Mr Taylor said: “95 per cent of all fruit and produce picked and packaged in this country is done by eastern Europeans.

“We are not talking about a few tens of thousands, we are talking hundreds of thousands of people less to work in the UK.

In response to the Telegraph’s article a Twitter account attempted to debunk its findings and explain how it really works.

The thread was shared thousands of times leaving the account holder to tweet his surprise at its engagement.

He wrote: “A little overwhelmed by the thread on picking/packing. Sorry if it keeps popping up on people’s TLs. I’m surprised by how many people didn’t realise this was how things worked. But I guess, when you’ve been living in that world it’s taken for granted as being ‘normal’.”

“Picking/Packing – A Thread. We’ve all seen the @Telegraph and the £30 an hour claim. This is bollocks! So here is a thread to give the reality a little bit of airing. This applies as much to packing eggs as picking fruit/veg. So as you all know, I have plenty of experience here.”

“For this thread, packing eggs and the alike will be called picking.

So here goes: First off, you get paid according to how much you pick. For example, 1 stack (6 trays of 30 eggs) will be 50p. This is the same payment if you do it in 2 minutes or 20 minutes. Same with plants.

“You get paid by weight or number, not by time. Your first year picking will suck! You’ll average probably £4.50 after a month of daily grind. By the end of 6 months you’ll be around £8-£9 an hour. Your body will have adjusted to the position and movements. After this it gets fun.”

“You will have entered the region of incremental gains, where you will need to push harder to increase your hourly rate. Instead of working quickly as possible you will start implementing tricks to speed your work rate, e.g. carry 2 or 3 knives to cut stems so you don’t sharpen…”

“Sharpen your knife in the field. A blunt knife slows you down. Sharpening slows you down. So you sharpen outside of work and switch out in the day to maintain optimal speed. In packing you adjust speeds and packing positions/layout. Things like this will take you to £15 an hour.”

“The next step is to graft and not drink too much. Toilet breaks and lunch breaks eat into your worktime. Snack on the go to keep energy high. Then progressively you will be pushing the £20+ earnings. It is a massively skilled job and the best pickers are many years into a career.”

“Yes I said career. The pickers would need to tour the CONTINENT to pick various harvests. Oh yes, they would tour all over the place. Picking one fruit in one country, then going around various farms of wherever they were, then on to the next country for the next harvest.”

“This was literally a way of life. Big groups would be in a hired coach, turn up at a farm and pick the harvest. The farm would put them up in caravans etc then onward they go to the next site. There is not year round fruit picking, so they would have to tour like this to survive.”

“Once the picking season was over they would then return home e.g. Poland, Russia etc and not need to work. The reason for this is because £8,000 goes a long way back home. Trying to be British and living off a picker’s wage is never going to happen. We get done over on taxes.”

“Oh yeah, taxes. Pickers get to choose the country where they pay taxation. So they’re not paying tax as the UK rate. Because they travel all over and are usually agency placed, they pay tax at where the agency decides. Agency will be set as a nice low taxation country.”

“This means the pickers get to have pretty much the full amount of their income, minus any agency fees. Some pickers self-organise. Same as sheep shearers. But they usually pay the organiser extra and they all cover costs. So it’s near enough the same as agency work.”

“Many people forget that picking is only a career if you can pick 365 days a year. How many farms have 365 picking? Eggs

But fruit harvest? NOPE!!! You get 1 or 2 harvests a year and each hatvest will take less than a week. Back breaking labour at £4 an hour twice a year?”

“This is why farms have started to give an actual wage to pickers. But the issue there is people will generally just draw out the harvest so they work for longer and get paid more. This system damages the farms. There is very little margin in farming as it is. Piece rate is the..”

..piece rate is the only way to make sure you’re able to make a profit and feed your family. Professional pickers are essential to the development of UK farming. The only alternative is mechanisation…which will only be affordable to the big players. The result will be that the..

…smaller farms will shut down because they cannot afford to pay people who stretch out their harvest time. Don’t forget that harvests are time critical. So stretching it out will cost even more money in regards to wasted crop. It’s a lose lose for pickers and farmers.”

“The Telegraph’s article is helping nobody and distorting the truth massively. They should not only be ashamed, but should learn the facts. The reality is a much more interesting story than what they are putting out.”