However, Thunberg tweeted: "Change won’t come from these conferences like #COP26 unless there is big public pressure from the outside. Join the climate strike this Friday." 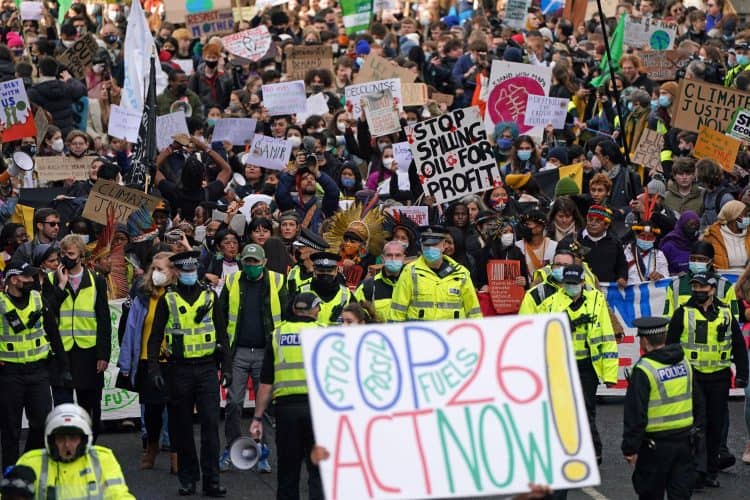 Thousands of young activists have begun marching through the streets of Glasgow to demand action on climate change from leaders and politicians at Cop26.

Campaigner Greta Thunberg, fellow activist Vanessa Nakate and other young campaigners, as well as local trade unionists, will speak to crowds at the end of the march through the city where the UN summit is being held.

The climate strike has been organised by Fridays for Future Scotland, with participants marching from Kelvingrove Park to George Square.

It comes as the Cop26 talks feature events highlighting the voice of young people and education in climate action.

At least 8,000 people are expected to take part in the march.

Ms Thunberg has been highly critical of the two-week conference, claiming it is the most “excluding Cop ever” and labelling it a “two-week celebration of business as usual and blah blah blah”.

Youth climate protesters should demonstrate at the weekend rather than in school time, the Education Secretary has said.

Nadhim Zahawi has urged young people not to miss school to protest about climate policies.

His plea came as youth activists are taking to the streets of Glasgow to demand action on climate change from leaders as the Cop26 talks continue.

Campaigner Greta Thunberg, fellow activist Vanessa Nakate and other young campaigners will speak to crowds at the end of the march through the city.

Asked on Times Radio whether he has been invited to join the marches, Mr Zahawi said: “No… I have to say, I wish they were doing it on a Saturday and a Sunday, not in school time.”

He added: “We’ve got two weekends of Cop here in Glasgow when they can have lawful demonstrations, and they should have those and have the right to do that, and I would happily engage with anyone who wants to come and tell me exactly what they think.”

The Education Secretary will set out a series of measures designed to put climate change at the heart of education in a speech to Cop26 on Friday.

Pupils will be recognised for climate action through a new Duke of Edinburgh-style award scheme.

But the strategy, which was published on Friday, says it “would not be appropriate” for schools to encourage pupils to join specific campaigning groups on climate change, or engage in protests over the issue.

Teachers will be supported to teach children about nature and their impact on the world around them through a “model science curriculum” which will be in place by 2023.

Speaking to Times Radio, Mr Zahawi said: “It means working with teachers to give them the resources so they can embed climate change evidence into science, into geography, into citizenship education.

“At primary school, we’re launching the primary model science curriculum that will also give teachers the resources for enriching young minds with the evidence around climate change. And I hope also the aspiration to become great scientists and innovators, to solve some of these problems.”

Climate change is already taught in science and geography lessons in England as part of the curriculum.

The Government’s draft climate change strategy says: “Teaching about climate change and the scientific facts and evidence behind this does not constitute teaching about a political issue and schools do not need to present misinformation or unsubstantiated claims to provide balance.

“However, in climate education there may be relevant political issues and partisan political views, for example on social and economic reform, that should be handled in line with schools’ legal duties on political impartiality.

“Importantly, whilst schools should support pupils’ interest in climate change and tackling both its causes and effects, it would not be appropriate to encourage pupils to join specific campaigning groups or engage in specific political activity, such as protests.”

When asked about young people missing school to join the protests, the Education Secretary told Sky News: “I would urge children not to miss school, not to miss class – we don’t want to get into a situation where teachers and headteachers are having to issue fines for missing education.

He added that he wants them to “think about their own career in science and technology and innovation” to tackle climate change, instead of protesting.

The Education Secretary will also be “Climate Change Minister” for the Department for Education in recognition of the importance of the agenda.

Young people will be able to undertake a new Climate Leaders Award to celebrate and recognise their work in protecting the environment, with a national awards ceremony held every year.

Students can progress through different levels of the award – such as bronze, silver and gold – in a similar way to the Duke of Edinburgh award.

The Education Secretary will host a panel session on Friday at Cop26 with education ministers from around the world.

He is set to confirm plans to pilot “energy pods” that can replace gas and coal boilers, and supply a school’s heating and hot water without any carbon emissions.

These are being tested first in some schools and, if successful, they could be rolled out across the school estate and into more public-sector buildings.

Schools, colleges and nurseries are also being encouraged to improve the biodiversity of their grounds.

Nick Brook, deputy general secretary of school leaders’ union NAHT, said: “School leaders know how passionate many young people are about the topic of climate change and they will want to support pupils to find ways to make their voices heard on the subjects that matter to them.

“Clearly there is a balance to be struck here and schools will look to find ways of ensuring pupils can discuss these issues and make their voices heard without disrupting learning or the school day.”