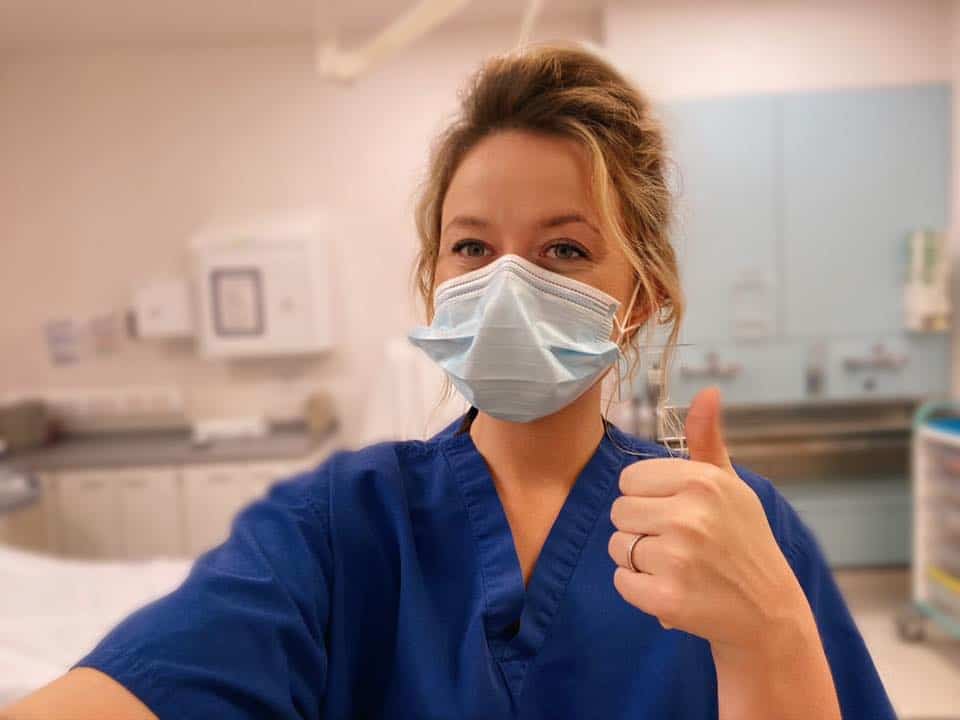 A young student nurse’s public plea to Boris Johnson following the news that nursing and social care staff will be left out of a public sector pay rise has gone viral on social media.

The young mum who blogs about about being a student nurse writes how unlike generations before and after, her cohort of student nurses, despite working twelve and a half hour shifts, have had to pay onerous nursing tuition brought in under Conservative government. Those like her paying fees to train are going to graduate with “£60,000+ worth of debt” despite risking their health on the frontline during the Coronavirus pandemic.

Jessica Collins, 27, who is studying Paediatric Nursing at De Montfort in Leicester has been drafted into A&E during the Covid-19 pandemic and even succumbed to symptoms herself in April. She told The London Economic that fortunately she was stable and was discharged from the A&E unit where she was working soon after. She has since recovered and has been back to work in A&E.

Jessica writes that she hopes the Prime Minister will read her letter and reflect on the many ways in which he has let down NHS staff like her. You can read her full letter to Boris Johnson below. It has been shared tens of thousands of times, so hopefully he will indeed read it.

I don’t know if you’ll see this, I’m not entirely sure if many people will see it at all but I feel like there’s things I need to say and my letters are just never responded to.

Maybe if this is shared enough, it could reach you eventually. Miracles happen. I know I’m not not an MP, a royal, a celebrity footballer, or anyone of high public standing so the chances are my voice may not warrant a response to you even if it does get there, but I wanted to give it a go anyway. I’ve never been politically minded, far left or far right or anything in between.

I would be the first to hold up my hands and say that despite always voting, I’ve never been 100% in who I’m voting for or why. Bad really, but the truth nonetheless. I guess I just had no need to really pay proper attention as I just bumbled along in my life without any vast political decisions really directly affecting me.

I now see my naivety and why I should always take better care in who and what I’m voting for. Since becoming a student nurse and living through this pandemic; I’ve been forced into this sense of hyper-awareness of some of the most awful injustices that the government have brought about.

Mostly, your government specifically. At this point in time, your government absolutely do not have my vote in the next election. I say this with the upmost certainty and unlike past voting decisions, I am 100% sure it is the right one.

Laughing at a nursing pay rise

This isn’t just because your government removed the bursary alongside funding for tuition fees, leaving student nurse mums like me in £60000+ worth of debt upon leaving this physically and mentally draining degree and condemning the future workforce to the same struggles.

This isn’t just because the government found a loophole in our opt-in contracts to help during coronavirus, to enable them to stop paying students for risking their lives on the frontline at the earliest opportunity.

This isn’t just because your designated minister for care declared in a letter addressed directly to me, that every single one of the 2,300+ hours I’ve completed in NHS hospitals as not being offering of any form of service to my patients.

This isn’t just because I watched a video back whereby 313 out of 317 conservative MP’s voted against a nurse pay rise (amongst other public sector funding) and then unashamedly laughed when they found out they had the majority.

This isn’t just because your ‘sing happy birthday twice whilst washing your hands’ was never ever going to be enough to avoid the the tens of thousands of deaths that have happened due to COVID-19. Nor is it just because you were too late to lockdown this country for whatever excuse you declare, and subsequently we paid heavily with the lives of so many of our incredible people.

This isn’t just because you left nurses, carers and other key workers specifically, out of a public sector pay-rise for those who have fought so hard against COVID-19.

This isn’t just because every single conservative MP voted no against a new clause intended to protect our NHS from any form of control outside of the UK, then tried to cover it up with sharing a positive story about giving doctors a pay rise.

This isn’t just because it takes a famous footballer calling you out on his public platform, to ensure that the most vulnerable children in our society had food to eat over summer.

This isn’t because of the many, many other things that yourself, or certain members of your party have done wrong, many of which I probably don’t know about. It’s not just because you’ve failed- we all make mistakes and I’m sure that somewhere lost in there you’ve done something positive too.

The main reason you don’t have my vote, is because every single time you have failed, you’ve not once turned around, held your hands up and said that you’ve made a mistake. It’s because I’ve not once heard you say sorry but that you’ve learned and you’ll do better next time.

It’s because every single time you or a member of your party are called out on your failings, you either lay the blame somewhere else, boycott those who dare to seek the truth or just release the same statement quoting the same generalised political jargon. I don’t trust that, not even a little bit.

As a nurse if I was ever to make a mistake, I would hold my hands up and take responsibility for it. I would absolutely say sorry anyone it’s affected. I would reflect on it and learn what I did wrong and then I would plan what I could do from then on to ensure I never make the same mistake twice. Now I know being a nurse is very different to being the prime minister however honesty, trustworthiness and humility should be attributes carried through any job at all if you are to earn any form of respect. Even more so one like your own where your decisions affect millions of people like me.

When people like me desperately try and express the unjustness of your decisions, you choose to ignore it, every single time. Your people don’t have a voice unless the complaints come from people of higher status or world renowned footballers who have the platform to make you look bad.

You made such a fuss of clapping for the NHS and indicated more, only to put us straight back in our under-valued places the first chance you got, with no explanation or apology. I don’t trust you and I’m sorry for that, nor do I trust one single member of your party given what they seem to stand for.

The saddest thing is, for so long you and many others have played a part in conditioning nurses like me alongside other health professionals to believe that they should never complain about how they deserve better pay. If we dare to feel under-valued or ask for more, it reflects badly on us because we should be doing this job out of the goodness of our hearts with a view to making a positive difference in people’s lives. Asking for more goes against our compassionate, selfless natures right?

Wrong. From the start of my degree I’ve been made to feel worthless and I’m absolutely done with that. Yes I’m kind and caring, yes I try to be selfless and I will always give everything I have to those I care for, but I’m not some muddy ground for you to walk all over in your quest for I don’t quite know what.

We work hard, we work tirelessly and unlike you we do it with honesty, humility and compassion, however you will be the only one out of us to get a pay rise this year. Can you see where this might be a little unfair? Or will you just release another statement saying how we are appreciated expecting that to make us all feel a little better?

I’ll close this letter off by saying that I am fully aware nothing will come from this. I don’t expect anything I’ve said to resonate with you and I am most definitely not posting it in the hope that someone will wave their magic wand and make everything okay.

However, maybe if you do get to read this, you can still secretly reflect on where you went a little wrong for people like me, say a quiet sorry in your head and in the future, wherever your life takes you, make sure you don’t ever make people feel so insignificant again. Maybe that’s one good thing that could come from it. In the meantime, I wish you all the best, but I’ll keep fighting for my colleagues and every other worthy person out there who deserves so much more than how their government has treated them. I’ll keep trying to make their voices heard, and if protecting them and ensuring they feel valued means voting you out; then I’m down for that. Sorry.