The cruel reality of "Global Britain," tweeted Best for Britain along with a pic of the map of refugee intake across Europe. 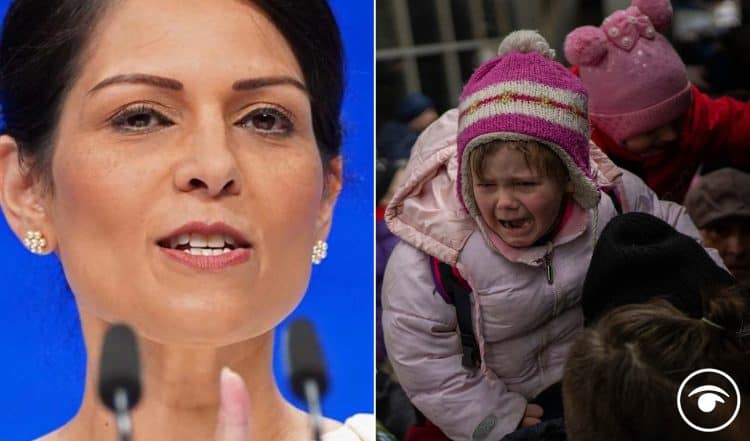 Grant Shapps has said he is “proud” of the government’s approach to the unfolding humanitarian crisis in eastern Europe as he revealed only 760 visas had been granted for Ukrainians fleeing the Russian invasion.

Asked why the UK was still insisting on visa checks which had been dropped by EU countries, Mr Shapps told Sky News: “President Zelensky has asked us to proceed in the way we are doing.”

The minister said: “Geographically, of course, we’re space further to the west. President Zelensky and the Ukrainian government have told me that they do not want people to move far away from the country, if at all possible, because they want people to come back.”

“We’re doing that in close coordination with president Zelensky and the Ukrainian government who want to keep people as close to Ukraine as possible.”

So are we doing enough?

Well, a British man struggling to get his elderly mother-in-law out of Ukraine has said he is “lost for words” at the “utterly ridiculous” response from the UK Government.

Michael Felton, 61, has been attempting to get his children’s 83-year-old grandmother to safety in the UK after her home came under fire from Russian airstrikes.

“My wife said to me she doesn’t want her mother, who was born during the Second World War, to die in another war… it’s hard to know what to say,” Mr Felton told the PA news agency.

“I am truly lost for words at how to describe the help our government is giving.

This story appears to be backed up by Jon Sopel who tweeted: “UN refugee agency says 1.7M refugees have now fled #Ukraine British government says it’s let in 300. Or: 0.017% of the total #wordbeating”

Matthew Thompson also tweeted about the freezing temperatures outside the UK Visa application centre in Poland.

In response to the unfolding crisis a new map has been produced showing the “cruel reality of Global Britain”.

Here is another version…

Related: Lorries carrying aid to Ukraine stuck at Dover because of…. well, you guessed it