Mark Cranston, from Jedburgh, Scottish Borders, first started collecting bricks in 2010 after he was looking for a brick as a doorstop for his garden shed and found a white painted brick from a former colliery. 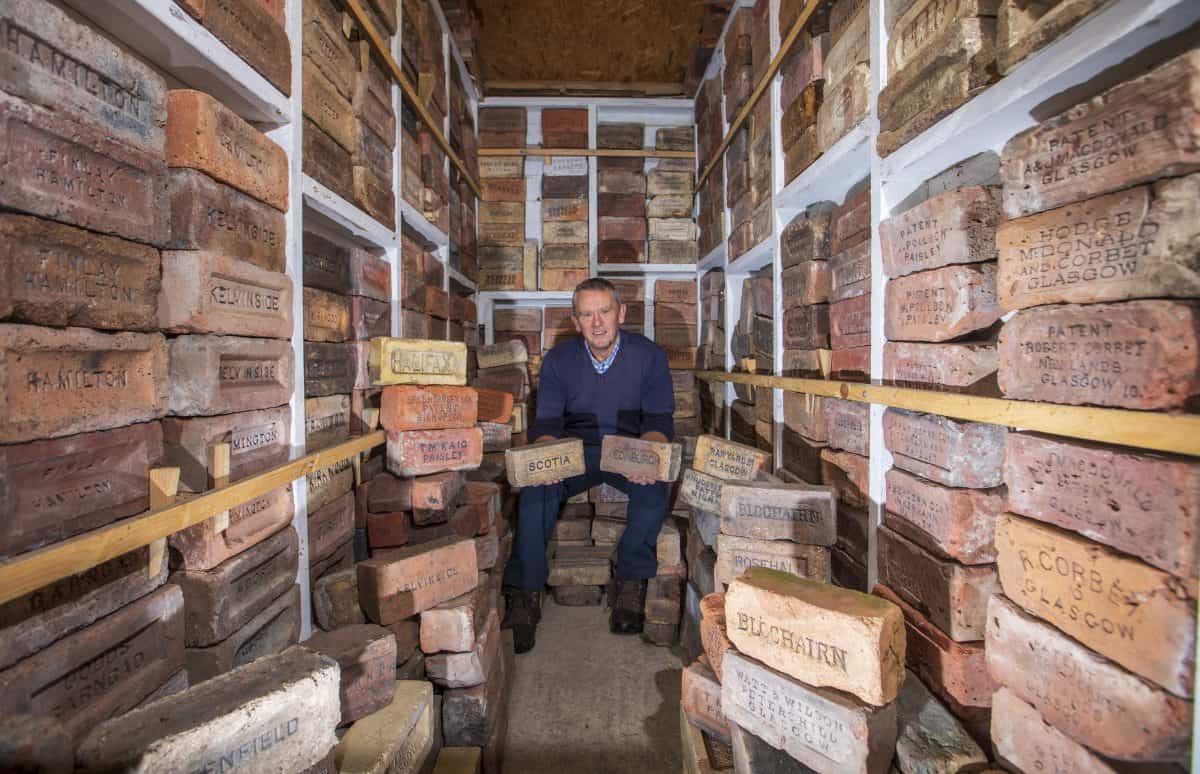 An eccentric collector has shown off his extraordinary collection of almost 3,500 bricks – which he keeps in his garden shed.

Mark Cranston, 56, began the bizarre hobby in 2010 when he was looking for a brick as a doorstop for his garden shed and found a white painted brick from a former colliery.

The discovery inspired the retired police sergeant to look into the history of the brick and his passion for them grew from there.

Over the last nine years, dedicated Mark has amassed a huge collection of bricks from around Scotland, England, Wales and abroad.

He stores the rare bricks in his garden shed which the dad-of-two has had to extend over the years as his collection grew.

It now measures six metres long by three metres wide with multiple shelves, like a library, to store the bricks.

Mark, from Jedburgh, Scottish Borders, said: “I was just looking for a brick to keep the garage door open and the first I picked up had a name on it.

“The first brick was the one from Whitehill Colliery in Ayrshire which peaked my interest.

“When I looked it up online I was surprised by the history behind bricks.

“I started to see there was a lot more bricks out there.

“They were once outside but I’ve got a shed now where they’re all inside and dry.

“But I’m running out of space and it’s not ideal – I need to get bigger premises.

“Ultimately the aim is a museum where people can come and see them all.

“Everything else like pottery, glass and iron go on display but not the humble brick.”

Among his collection Mark has a fire brick that was salvaged from the SS Politician, which ran aground in the Outer Hebrides in 1941 and was carrying 264,000 bottles of malt whisky – inspiring the famous novel Whisky Galore.

He has a brick that in the late 90s was retrieved from the demolition of the execution block at Glasgow’s HMP Barlinnie, Scotland’s largest prison.

Mark also has a Scottish made brick from an old gold mine in Washington state, USA, and the oldest brick he has is a drainage tile from 1833.

He said: “There was a prison warden who’d retired from Barlinnie and had rescued a few bricks stamped ‘Wilson & Son Barlinnie’.

“They’ve had a few notable characters passing them over the years.

“Each brick tells a story.”

In 2014, Mark set up the website Scottish Brick History, a database of thousands of bricks found by Mark and other collectors and enthusiasts.

He said: “The website includes bricks I’ve found and bricks people have found that I don’t have.

“I really wanted it to be a one stop for all and it’s well used.

“The idea was every Scottish brick mark will be on there.

“There’s no known total, but we’re over 3,000 Scottish brick marks.

To find bricks, Mark seeks out old buildings that are being demolished and scours old brick work sites, rivers and shorelines.

He also has hundreds of contacts in Scotland and abroad who notify him about finds, tip him off about building demolitions and useful locations for sourcing centuries old rubble.

Mark said: “Over time I’ve met other folk out and about, online and through email.

“They look for bricks for me or send me photographs and drop me hints of buildings coming down.

“There’s also other people who’ve once had a brick collection and donated them to me.

“I’ve got over 3,000 Scottish bricks and about 450 English, Welsh and foreign bricks.

“Scotland was a huge producer and it was massive for the UK.”

Mark has racked up around 75 per cent of his collection through his own excursions and 25 per cent from kind donations.

And collecting is a family affair, as Mark’s wife Karen, 47, son Jonathon, 28, and daughter Hannah, 30, have also got involved with his brick hunting.

He said: “My son and daughter have been out and picked up a brick here or there and my wife tolerates it and she’s also been out on brick hunts with me before.

“I’ve never been out on a trip and not came back with anything.

“It takes up a lot of time but it’s a passion.”