“People are dying waiting for ambulances whilst crews are stuck at hospital with Covid-confirmed patients.” 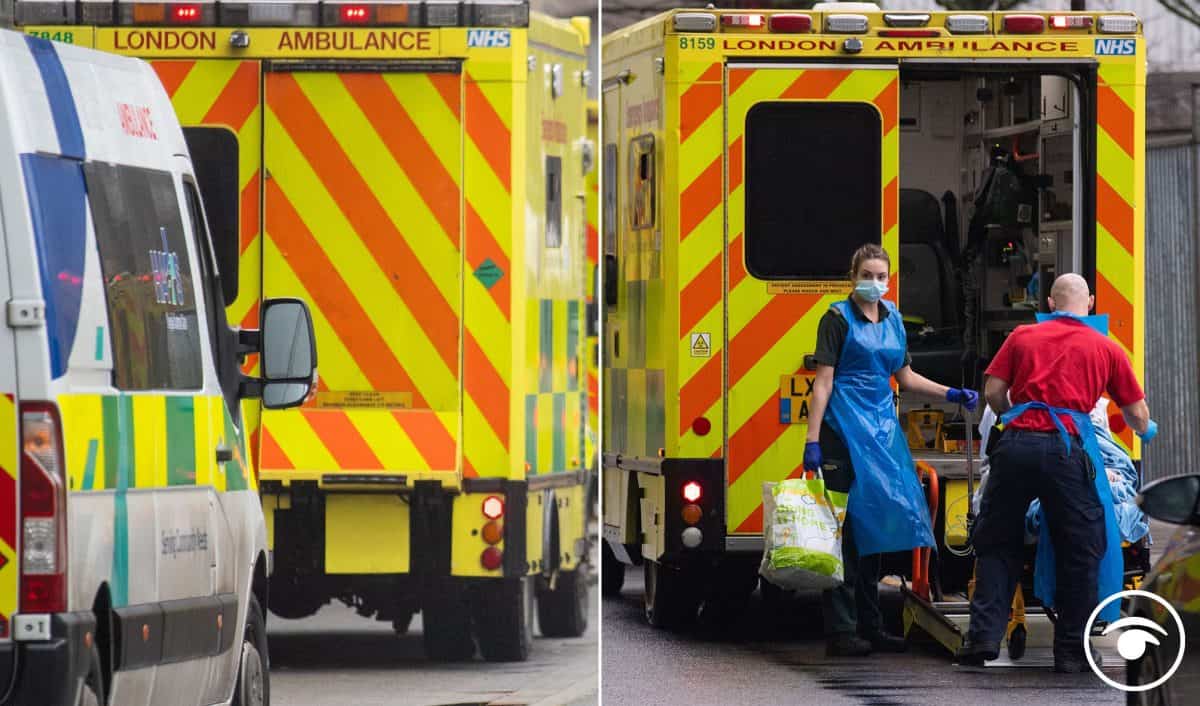 Three out of four ambulance staff are at “breaking point”, suffering low morale and calling for better protective equipment, a new study suggests.

The GMB union said almost two out of three of 2,000 of its members surveyed said they believed their PPE should be upgraded.

Three out of four respondents said ambulance workers were at “breaking point”, with the crisis much worse than when the lockdown first started last March.

– “People are dying waiting for ambulances whilst crews are stuck at hospital with Covid-confirmed patients.”

– “We had a taxi pull up in an ambulance bay with a dead male while his wife was shouting for help.

“In 24 years in the ambulance service I’ve never ever seen staff sat on station at the start of the shift so frightened (almost to tears) to go out on an ambulance.”

“Staff overwhelmed – calls waiting are in their hundreds for hours on end with little or no resources to send.”

Something has to give

GMB national officer Rachel Harrison said: “This cannot go on – something has got to give.

“Ambulance staff are going off sick in droves while the service collapses around them, despite their heroic efforts.

“A massive 93% are crying out for better protection, the PPE they are given just isn’t fit for purpose, and is a massive factor in why the situation is so desperate.

A Department of Health and Social Care spokesman said: “The safety of NHS and social care staff including paramedics has always been our top priority and we continue to work round the clock to deliver PPE that helps protect those on the front line.

“Guidance on the safest levels and standards of PPE is written by experts and agreed by all four UK chief medical officers.

“Our guidance is kept under constant review based on the latest evidence.”

On 14th Jan a hospital in London was having to return patients to waiting ambulances after procedures due to an “overwhelming” number of coronavirus patients, a frontline doctor has said.

The doctor, who asked to remain anonymous, told the PA news agency that “significant patient harm” was occurring as a result of a lack of available beds, with A&E staff forced to treat other patients in the vehicles outside.

“It’s not the fault of the staff, but the sheer numbers are so unprecedented and being full like this means that you just have to do your best to adapt. But it’s not the standard (of care) I signed up to,” he said.

“It’s extremely stressful for us to be doing our best but knowing that significant patient harm is happening because there isn’t space and the patient load is too high.”

Staff are “running” into ambulances to treat patients, he said, until space becomes available in A&E, but this limited much of the care they could provide.

He said: “Last week, I saw a patient in the back of an ambulance who had very low oxygen levels, and it became very clear he had heart failure, liquid was building up in their lungs and they were essentially drowning.

“So I had to walk them out of the ambulance, to an X-ray machine, they had their X-ray in the hospital and because there was no space we had to stretcher them back to the ambulance, even though they were in heart failure.”

With families unable to be in hospital, he is now making two or three phone calls per shift to discuss end of life care with relatives.

He worked a shift finishing at 8pm on New Year’s Eve and said he felt “sick” to his stomach seeing party-goers on the Tube home.

He said: “On the Tube, there were lots of people wearing glittery outfits. I felt so upset because I know they are not wearing those outfits to go shopping, they are going to a party.

“I felt so upset because I’ve been fighting all day and it didn’t seem to matter to them. They were going to pretend it wasn’t happening.”

Staff shortages have hit hospitals hard, but the London doctor said this was not always due to Covid, with some staff being signed off sick with PTSD, depression and anxiety.

He said: “I know ICU nurses who can’t go to work because they can’t sleep.”

However, amid the “overwhelming” patient numbers, he said staff desperately try to make sure loved ones get time with their relatives before they die.

“There was an elderly man I knew was going to pass away from Covid, and I contacted his daughter — she wasn’t aware he had even been brought to hospital,” he said.

“She asked if she could bring in a little glass of whiskey and have it with him, and I said that was a good idea.

“I don’t know why it hit me so hard, but she came in, and they had a whiskey together and by the time she’d come out, he passed away.

“Somehow amidst all the horrible things going on, we somehow made sure she had that moment which was very important.”