Click on the ads, and ‘The Brexit Deal Explained’ website appeals: “this is the choice: Backing the deal in the national interest so we can build a brighter future – or going back to square one by rejecting it.” 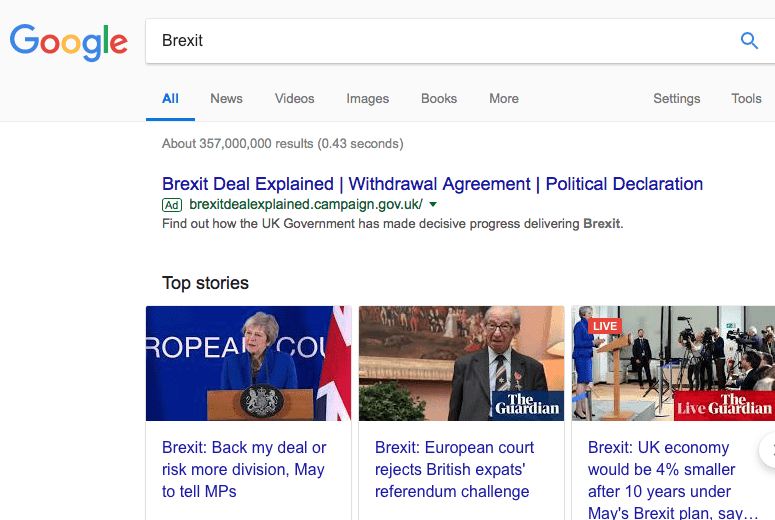 Type ‘Brexit’ or ‘Brexit deal’ into Google today and above any other search result is a Google advert that the government appears to be paying for with your money to sell Theresa May’s Brexit deal to you.

And the plan will need a lot of selling.

A report today reveals that her Brexit deal will leave Britain £100bn worse off by 2030 – the equivalent of losing the economic output of Wales or the City of London – expected to be followed by more embarrassment when May is forced to show MPs the government analysis comparing UK economic prospects if the UK remains in the EU with her Brexit deal.

Theresa May faces a battle to convince MPs with rebels within her own party continuously pointing out the flaws in her Brexit deal with new revelations that fishing rights and the future of Gibraltar will now be hostage to future negotiations once Britain is in a weaker position with no seat at the EU table but still subject to its laws.

And with the numbers not looking good for the government in the House of Commons, May is now trying to convince MPs by not only reportedly offering peerages, favours and jobs, but also by appealing to voters in their constituencies with a new government website pushing her deal along with a cheerily soundtracked ‘The Brexit deal explained in 60 seconds’ video.

Click on the ads, and ‘The Brexit Deal Explained’ website appeals: “this is the choice: Backing the deal in the national interest so we can build a brighter future – or going back to square one by rejecting it.”

“It is time to get on with it,” the website pleads, proceeding to claim:

“If we back this Brexit Deal, it means:

“We will no longer send vast sums of money to the EU so we can spend more on our priorities, like investing in our long term plan for the NHS

“We will take back control of our laws, ending the jurisdiction of the European Court of Justice in the UK

“We will keep people safe against crime, terrorism and other threats by working closely with European countries

“And we will protect the integrity of our United Kingdom”

You can also type ‘Brexit’ and ‘factcheck’ into Google if you want to check the veracity of some of these claims.