“If we look at the alternative to that deal with the European Union, we see that it will either be more uncertainty and more division, or it could risk no Brexit at all.” 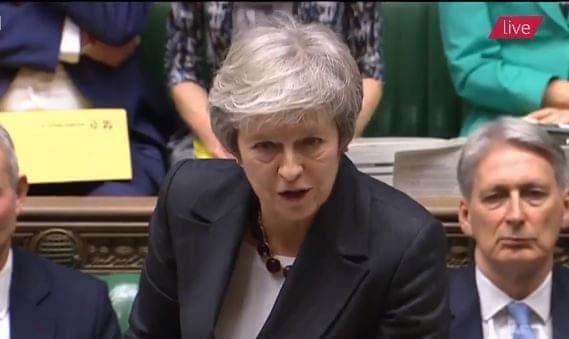 After consistent threats that voting against her unpopular Brexit agreement could result in Britain crashing out of the EU with no deal at all- with the chaos that entails, Theresa May today conceded that it could also mean “no Brexit at all.”

This may be a threat to Jacob Rees-Mogg and fellow Hard Brexit trouble-makers trying to unseat her while claiming that a better Brexit agreement is negotiable.

“I think what the country needs now is the certainty of an orderly exit,” the new Secretary for Works and Pensions told BBC Radio 4’s Today programme today.

“Brexiters may lose their Brexit,” she warned, adding that any new amendments to the agreement would be even less palatable to Hard Brexiteers.

Suggesting that this is a co-ordinated strategy to force Brexiteers’ hands, within hours, fellow Conservative Liz Truss, told BBC Radio5 Live: “if my colleagues don’t vote for this in parliament, we are in serious danger of not leaving at all.”

Tory MP Damian Collins, a fierce critic of Theresa May’s deal also said that a referendum on the final deal or general election were likelier than a No Deal Brexit – which had no “majority in the House of Commons to allow.”

Following a number of cabinet ministers’ similar statements the Labour leader asked Theresa May this afternoon:

“Now that a number of Ministers have confirmed this morning that leaving the EU with no deal is not an option, does the Prime Minister agree that there are no circumstances in which Britain would leave with no deal?”

In a roundabout and rather defensive manner Theresa May replied no, but appeared to agree with Jeremy Corbyn’s point, responding:

“No. I have consistently been clear on this point. The point that has been made by a number of my colleagues in relation to the vote that will come before the House—a meaningful vote on a deal from the European Union—is very simple. “If we look at the alternative to that deal with the European Union, we see that it will either be more uncertainty and more division, or it could risk no Brexit at all.”

Another Theresa May U-turn?