@BenGelblum  The House of Commons Exiting the European Union Committee has published the Whitehall Brexit impact analyses that the Government did not want you to see. Brexit Minister David Davis fought tooth and nail to keep the assessments of the possible impacts of Brexit on the economy confidential, insisting they might jeopardise negotiations with the […]

The House of Commons Exiting the European Union Committee has published the Whitehall Brexit impact analyses that the Government did not want you to see.

Brexit Minister David Davis fought tooth and nail to keep the assessments of the possible impacts of Brexit on the economy confidential, insisting they might jeopardise negotiations with the EU if revealed.

Yet it in the end there is only one section of the impact reports which has been left out of the 29 pages that the Brexit Select Committee chose to make public, making a mockery of the Brexit Secretary’s argument.

The study involves economic forecasts of how regions will fare over the next 15 years. And as you can see below whichever type of Brexit, there is no part of the UK that won’t be left economically worse. And the more divergence from European regulations and trade the UK goes for, the worse the economic fall out, as many “experts” did warn.

There is nothing in this report that the Brexit campaign would have chosen to stick on the side of a bus.

No sign of the £350 million a week promised to be freed up for the NHS or other public spending. Instead Brexit means far graver cuts and austerity lasting a great many years.

There is a lot to take in, summarised below – 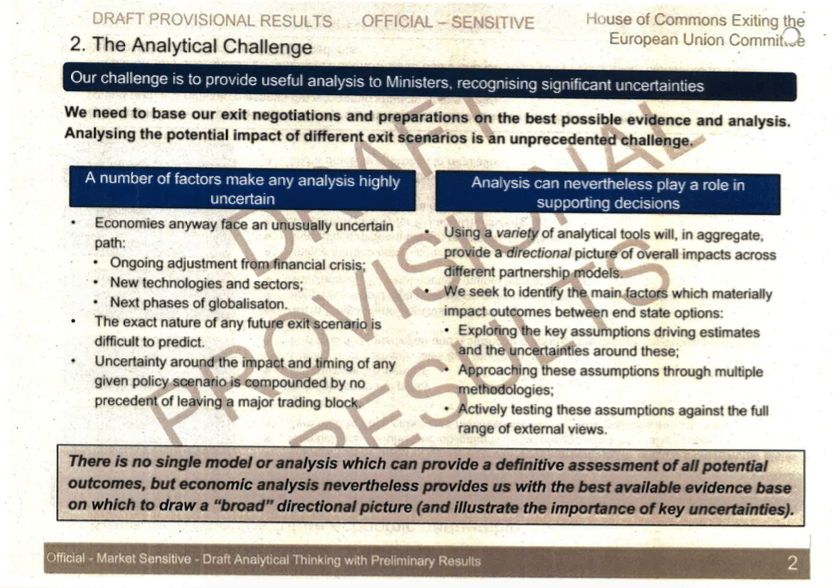 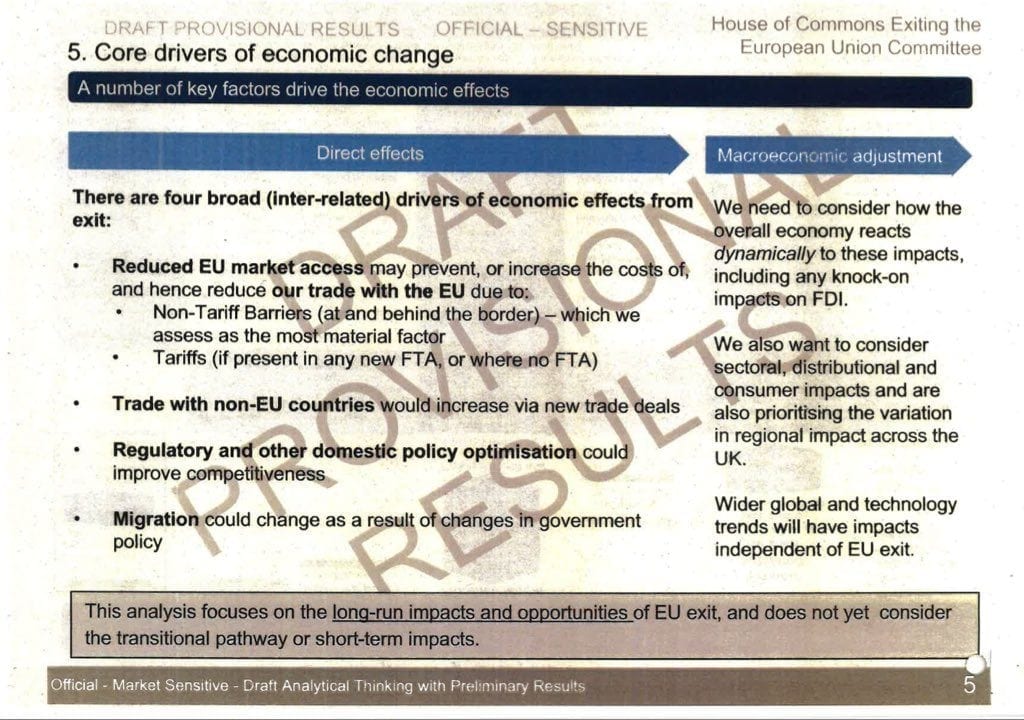 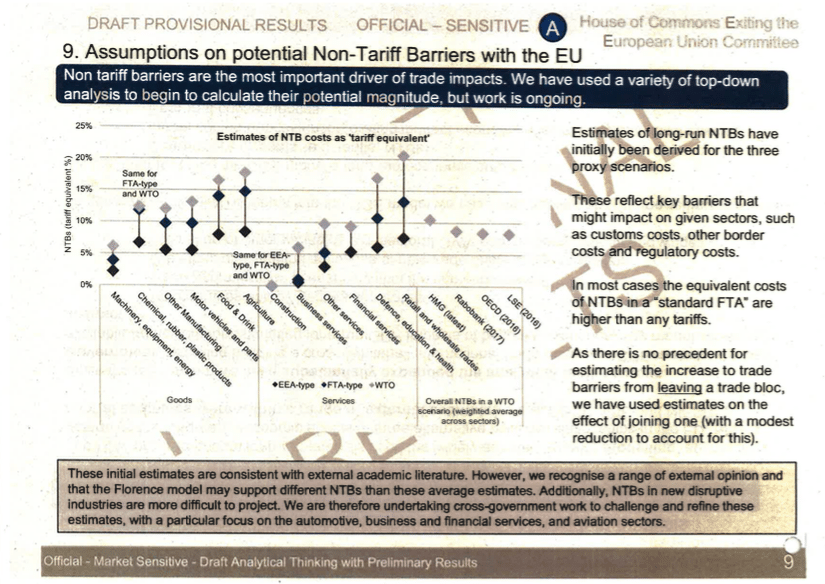 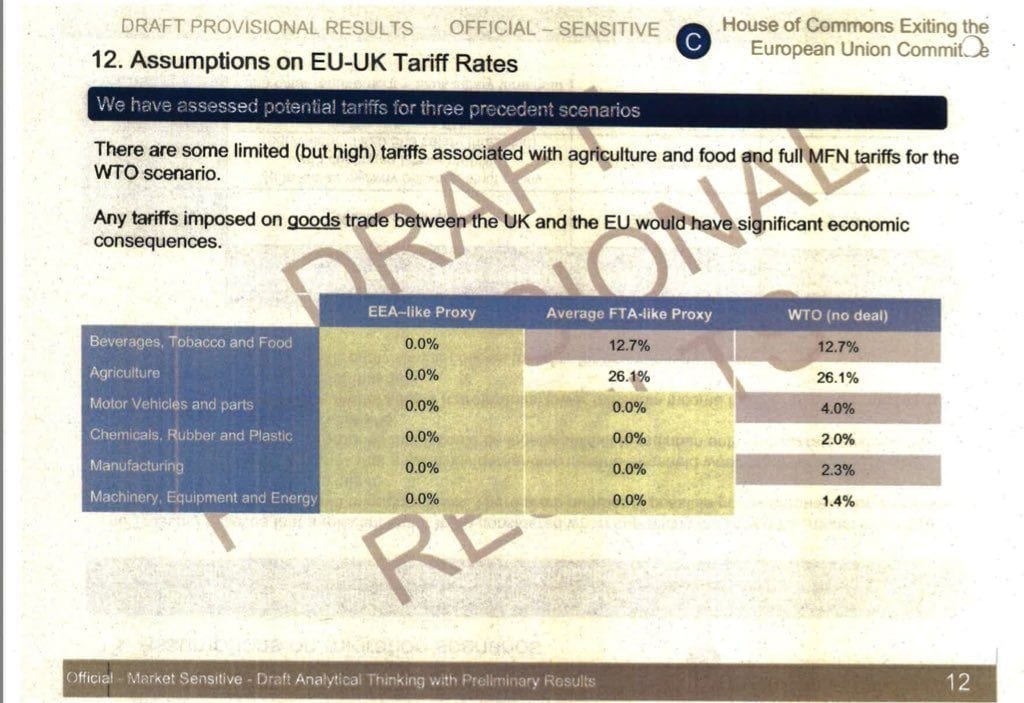 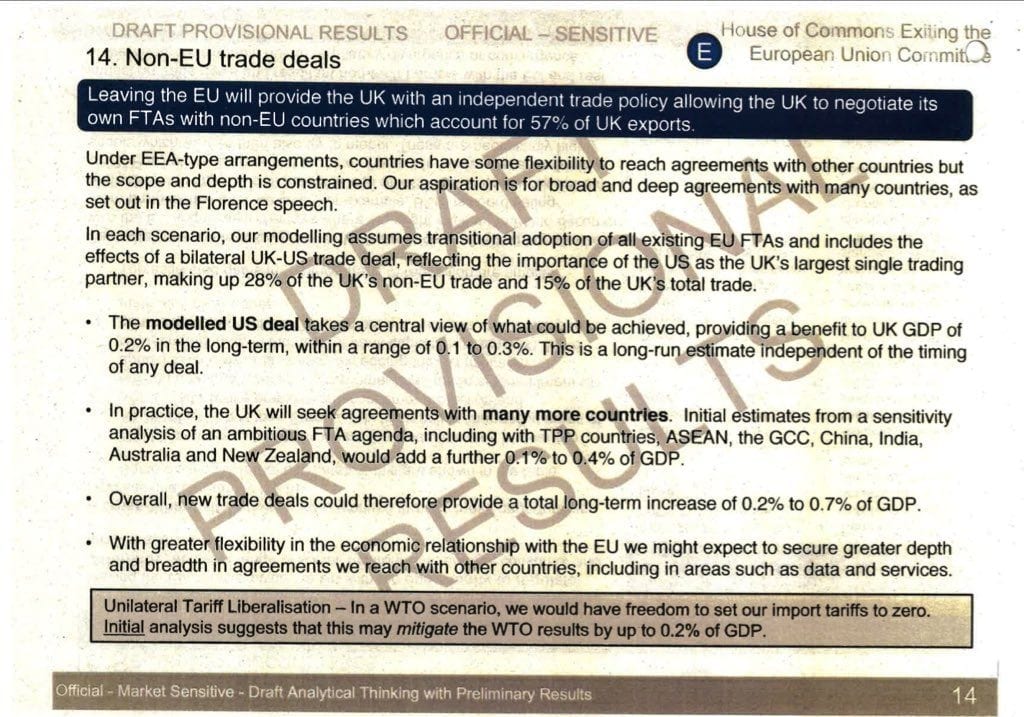 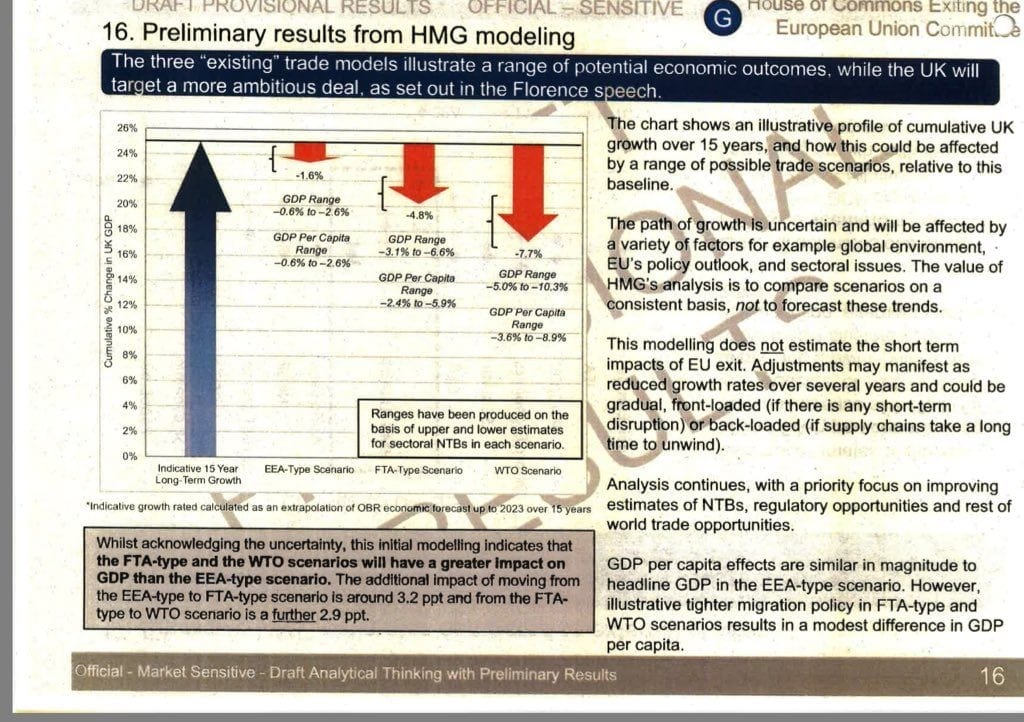 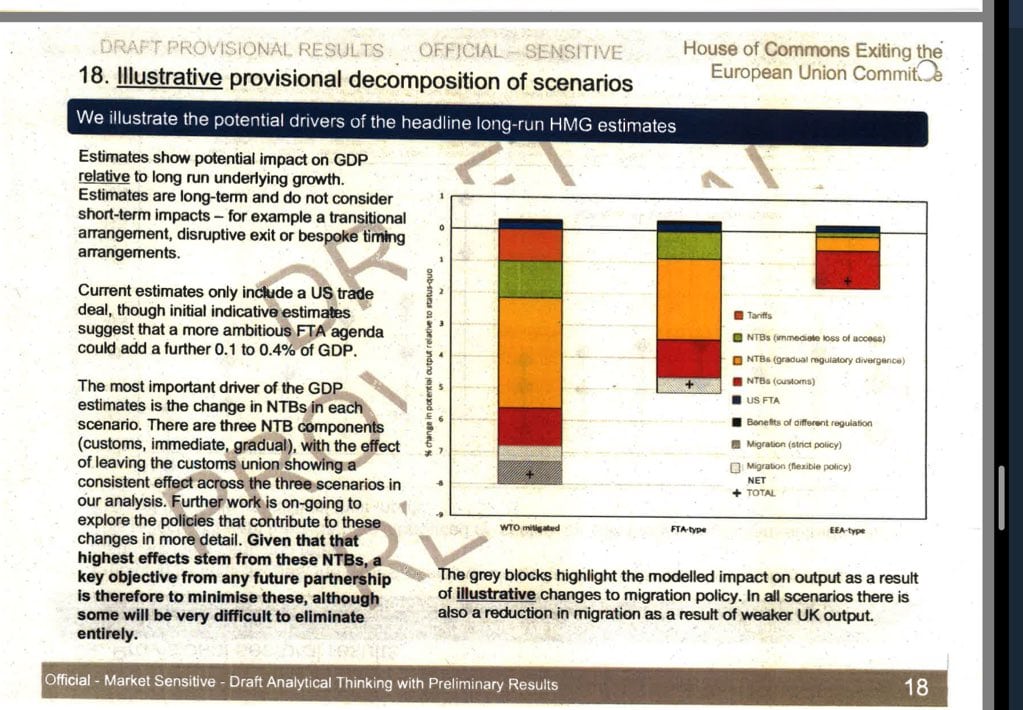 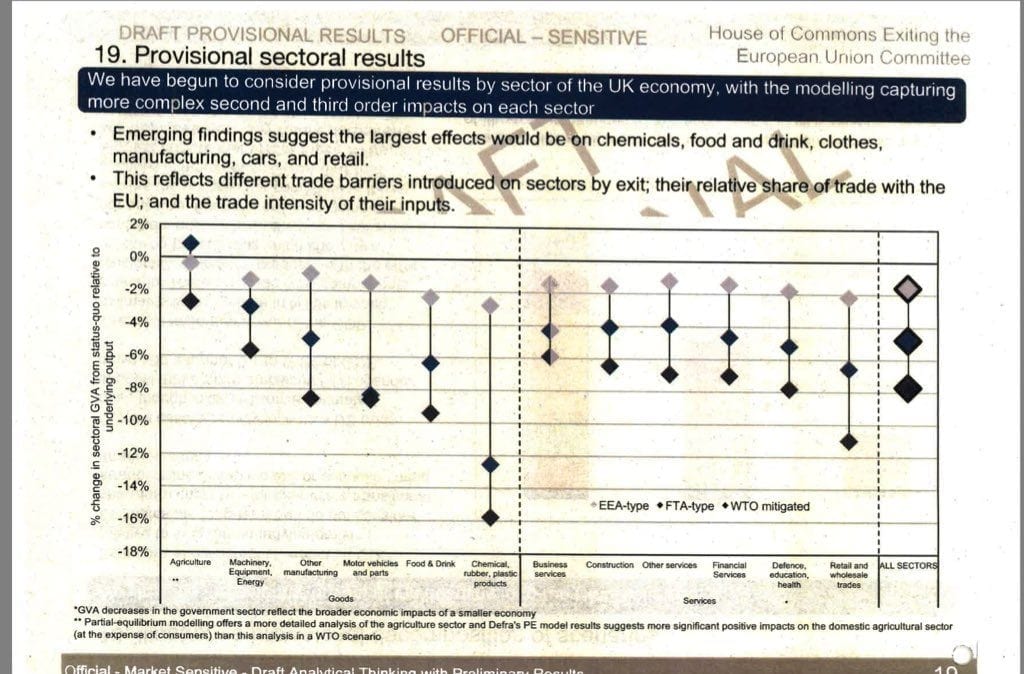 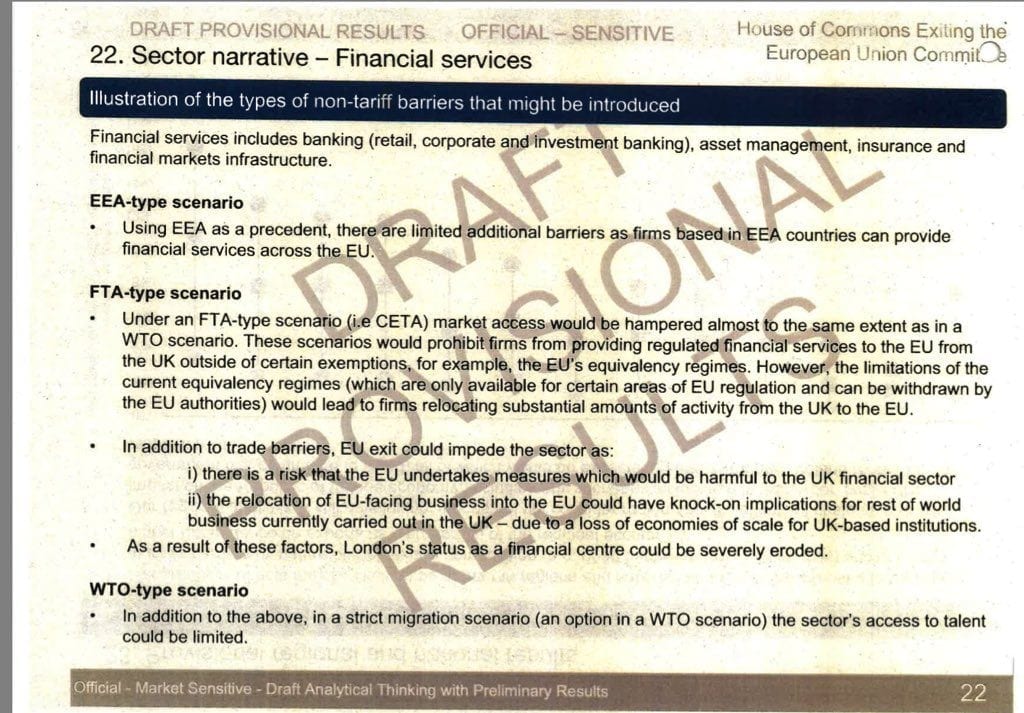 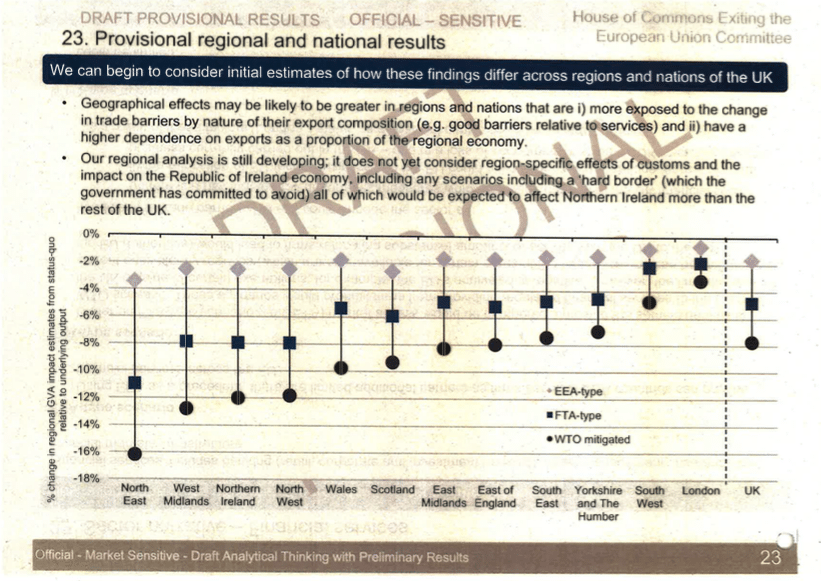 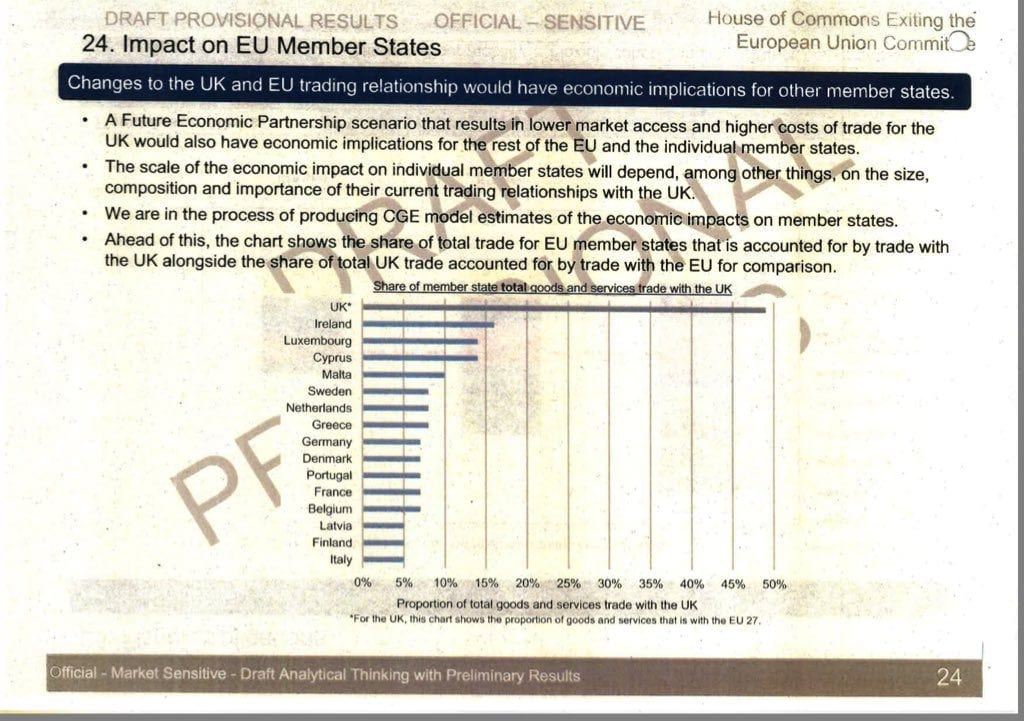 The impact on voters reading this and knowing that Theresa May is embarking on a course that will make every sector of the British economy and every single region poorer remains to be seen.

Labour MP Chris Leslie, part of the Open Britain group campaigning for a softer Brexit – said: “This whopping hit to the public finances, on top of an exit bill of at least £40bn, means less money for the NHS, for schools, for the defence budget and all our other national priorities.

“The Government can no longer conceal the grim fact that they are leading us to a new era of austerity. As new facts like these emerge about the monumental costs of Brexit, everyone is right to keep an open mind about whether it is all worth it.”

And the different sectors affected had dire warnings too. The Food And Drink Federation’s Tim Rycroft warned:

“It is deeply alarming to see the financial impact of any bad Brexit deal on UK food and drink set out in such stark terms. The findings show that food and drink would be worse off in every single scenario modelled – faring the worst under WTO terms.”

“We’ve been calling for the Government to come clean about Brexit for more than a year. Now we see some of what they were trying to hide,” said Eamon O’Hearn of  GMB, Britain’s general union, adding, “these industries are particularly sensitive to trade and import barriers, which highlights the potential damage from Government’s red line on not being in “a” or “the” customs union.

“GMB has been calling for this analysis to be made public so that UK workers and the public can see for themselves what the future could hold for their jobs, families and communities.

“This is not a political game – this affects people’s lives, their jobs, their families and their futures.”