Ron Stevenson, 69, was diagnosed with motor neurone disease ten years ago, and, despite being paralysed, needs to somehow fill in forms so he can get his £150-a-week payments that help pay for his care. 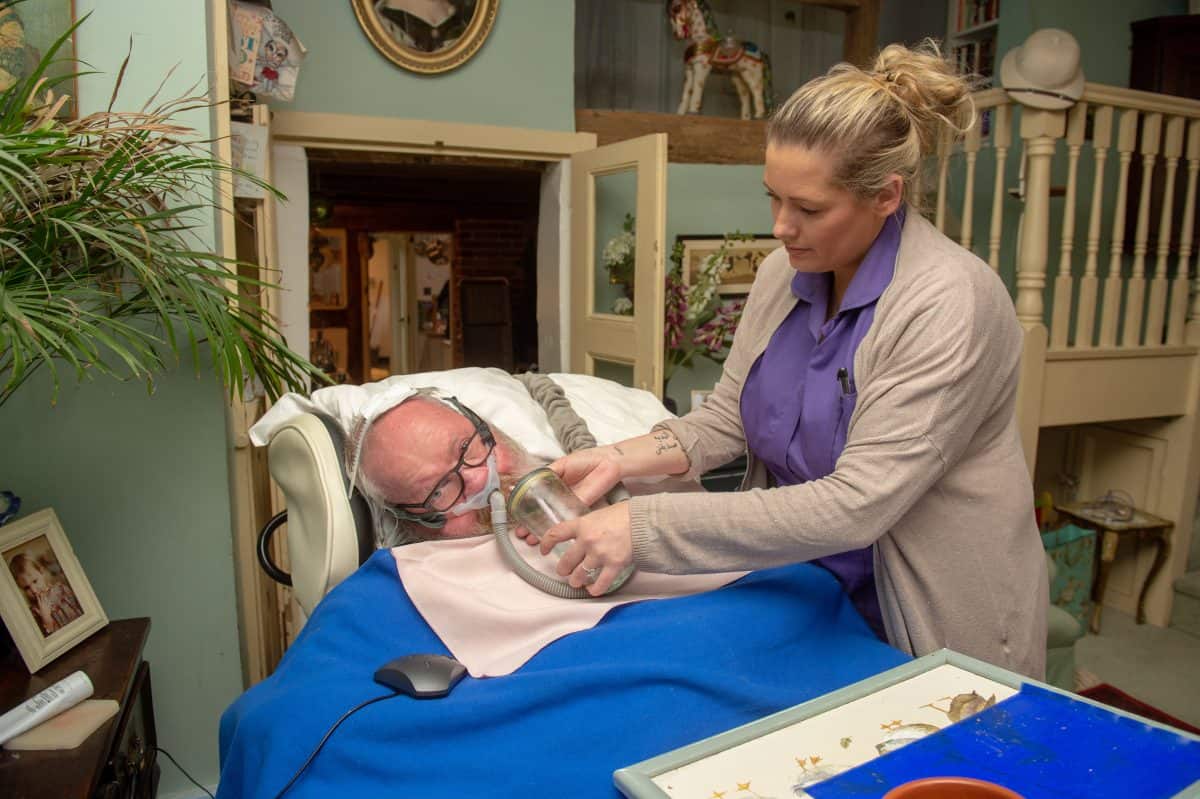 The Department for Work and Pensions is forcing a terminally ill man to reapply for his benefits – despite having just six months to live.

Ron Stevenson, 69, was diagnosed with motor neurone disease ten years ago and relies on moderate weekly care payments to supplement his care.

Those in his position can claim up to £150 a week in Personal Independence Payments to ease suffering and care.

But last month, Ron received a letter from the Department of Work and Pensions (DWP) calling for him to reapply for his benefits because he is up for reassessment.

Grandfather Ron, of Staplefield, West Sussex but originally from Lancashire, called the call for reassessment “devastating”.

He said: “The letter said if you do not reply then on July 29 your payments will stop.

“Obviously I’m aware that this is something that can happen, but it was still a shock.

“People with motor neurone disease never get better – there is only one outcome and that is death.

”Anyone with a grain of sense would’ve realised anyone paralysed and life limited as I am cannot be anything other than eligible.”

After weeks of worry, Ron and Gill, 64, contacted the DWP by phone to set the record straight.

He said: “The following day I got news back saying that the DWP is looking at the case and I would receive a letter.

“I rang my GP for my DS1500 form – which is the form that states the patients will die within six months.”

Ron was contacted by the office of MP Nicholas Soames and reassured that after speaking with the DWP, his payment would continue.

He said: “This individual case does not cover all the others with the condition – not everyone has the support that I do.

“Some will look at the letter and think ‘oh my God’, they have lost their benefits, imagine the disconsolation.”

The DWP contacted Ron by letter on Wednesday, more than a month after his call, to confirm he will be getting his benefits for three more years – if he lives long enough.

When asked about this further reassessment, a DWP spokeswoman said: “This will be a letter saying has his condition changed.”

She was then reminded that Ron’s condition is terminal, to which she said “these are the rules we have to follow”.

According to the Motor Neurone Association, there are 5,000 people suffering with the degenerative condition in the UK.

The report also estimated the cost to a family of having to live with MND as £15,000 each year.

Father-of-two Ron said the “crazy” situation of reassessment for motor neurone sufferers must be addressed.

He said: “We were promised by the government that the reassessment for benefits would stop in 2016 – this has been broken.

“I’m working to raise awareness, we won’t stop fighting, despite the fact the disability is fatiguing.

“I have lost the use of my limbs, but I shall use my voice, while my friends can no longer.”

Most motor neurone disease sufferers die within two to five years of diagnosis, and it is the condition that claimed the life of renowned physicist Stephen Hawking.

A DWP spokesperson added: “Our thoughts are with Mr Stevenson at this difficult time and we are sorry if our notification letter caused him distress.

“We fast track reviews to confirm support for people in his situation, which can be done by the medical professional on their behalf, and we continue to pay Mr Stevenson the higher rate of PIP without a break.”