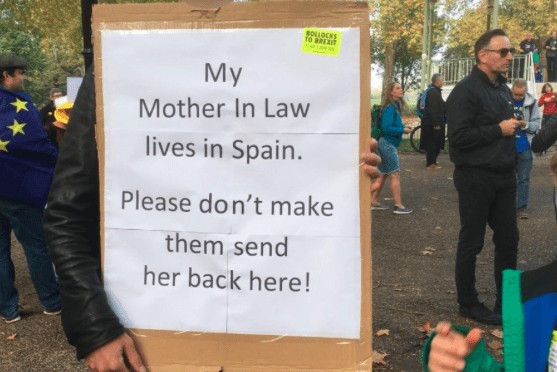 In a major coup for the People’s Vote campaign, a YouGov poll of 26,000 voters in all 259 Labour held seats found voters from all parties favour the people having a final say on the eventual Brexit deal.

This included many constituencies where majorities had voted to leave the EU in the referendum.

The most support for a second referendum was found in Jeremy Corbyn’s Islington North constituency where 80% supported a People’s Vote on the Brexit deal.

But the People’s Vote hope that this poll will overturn a lot of myths about what exactly is the will of the people and help persuade Labour MPs to back a final say for the British public.

One Labour MP who has been persuaded is Jess Phillips, MP for the Birmingham Yardley seat which voted 60% for Brexit, but where the poll found 63% now want a People’s Vote.

She said: “it’s no surprise to me that my constituents feel that they have been failed in the negotiations and are changing their mind on Brexit.

“If I had to pick who decided my fate between Theresa May or the people in my community I’d pick them every single time.”

Labour colleague David Lammy tweeted: “Labour must now embrace a #PeoplesVote. The moral argument to protect workers is clear. The strategic argument against is evidently false. If we do not campaign for a #FinalSay, we will be complicit in the single worst policy decision in British history.”

Labour MPs will also be paying attention to business leaders, many of whom wrote an open letter in the Sunday Times this weekend demanding that British voters have a final say second referendum.

Despite Theresa May meeting 100 business leaders this weekend to plead for unwavering support for whatever deal she negotiates, many wrote a letter warning of the damage that “either a blindfold or destructive Brexit” will cause to the country.

The letter was signed by over 50 senior business including James Daunt, the Waterstones’ chief executive; Justin King, the former Sainsbury’s chief executive who now heads the portfolio operations of private equity firm Terra Firma Capital Partners; Baroness Lane-Fox, the co-founder of Lastminute.com and board member at Marks & Spencer and Richard Reed, co-founder of Innocent Drinks.

They write: “the business community was promised that, if the country voted to leave, there would continue to be frictionless trade with the EU and the certainty about future relations that we need to invest for the long term.

“Despite the Prime Minister’s best efforts, the proposals being discussed by the government and the European Commission fall far short of this.

“We are now facing either a blindfold or a destructive hard Brexit.

“Given that neither was on the ballot in 2016, we believe the ultimate choice should be handed back to the public with a People’s Vote.”