“This was the opportunity for Government to turn their clapping in to genuine recognition. Their response is paltry. They have failed spectacularly.” 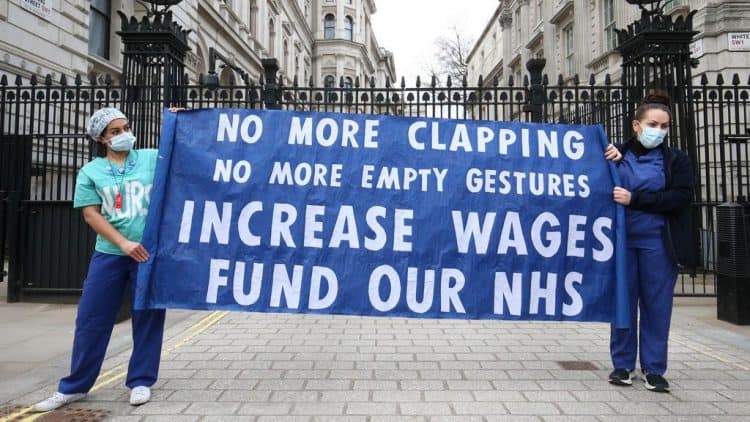 Unions have lashed out at a 3 per cent pay rise for NHS staff, accusing ministers of failing to recognise their efforts during the pandemic.

The pay rise was due in April, and the NHS Pay Review Body (PRB) made its recommendation almost a month ago.

An expected Commons statement at lunchtime on Wednesday failed to materialise, but a few hours later the Department of Health and Social Care (DHSC) issued a press release saying a 3per cent rise will be paid, backdated to April.

It will be paid to the majority of NHS staff in England including nurses, paramedics, consultants, dentists and salaried GPs.

It does not cover doctors and dentists in training.

The DHSC said the “average nurse” will receive an additional £1,000 a year, while many porters and cleaners will get around £540.

A statement said: “The Government committed to providing NHS staff with a pay uplift in recognition of the unique impact of the pandemic on the NHS.”

Prime Minister Boris Johnson tweeted on Wednesday night: “Our NHS staff have been heroic throughout the pandemic, providing care and saving lives.

Labour accused the Government of “more chaos and confusion” after Health Minister Helen Whately made no mention of pay during her initial speech to the House of Commons on Wednesday.

Unions representing NHS workers had been set to react to confirmation of a 3per cent increase – but the announcement did not come until just before 6pm in a DHSC press release.

BMA council chair Dr Chaand Nagpaul said it is “disappointing” that the announcement of a 3per cent pay uplift for doctors in England “does not adequately recognise the extraordinary contribution of doctors working in the most challenging period” in their professional lives.

He said: “Doctors have risked their health, and some have even lost their lives as they have worked to treat patients and protect the nation against a deadly virus.

Our NHS staff have been heroic throughout the pandemic, providing care and saving lives.

To recognise the extraordinary contribution they have made they are receiving a 3% pay rise this year. pic.twitter.com/Z5TnyqPqYx

Exhausted and burned out

“Scores of doctors have not taken annual leave and have worked extra hours without pay as they served the nation.

“Now they face a gruelling year ahead with millions of patients on waiting lists, and the country in the midst of another Covid-19 wave.

“Our members have been left exhausted, burned out and on the verge of physical and mental breaking point by the past 18 months.

“Junior doctors and GPs on multi-year pay deals in England have given just as much of themselves as all doctors to care for their patients – and yet have been callously disregarded in this pay award and will receive less than their peers.”

The Royal College of Midwives’ executive director for external affairs and one of the NHS Unions chief negotiators, Jon Skewes, said: “At least the limbo our hardworking members were left in by our shambolic Government has ended.

“We are disappointed that maternity staff in England will not receive a headline increase of 4per cent like their colleagues in Scotland.

“Through our evidence to the Pay Review Body, we managed to secure more than the 1per cent proposed by the Government, but again this is not backdated far enough or on par with the pay award in Scotland.”

The HCSA, the hospital doctors’ union, said it will meet in emergency session to discuss its response to a government pay offer, with strike action thought to be on the cards.

HCSA president Dr Claudia Paoloni said: “This offer represents an improvement on the low bar the Government itself set earlier in the year, but is an insult to junior doctors who have once again received a lesser rise than their senior colleagues.

“These are doctors who have stood side by side with NHS colleagues in mounting the Covid response, rising to every challenge placed before them.

“These Consultants of the future will rightly feel aggrieved that once again they have been singled out for worse treatment, ignoring their efforts during this pandemic.

“We fear that given rampant inflation this offer will also be insufficient to address the looming impact on career choices among all grades after the long battle against Covid, which has caused many hospital doctors to reconsider their future, either by cutting hours or leaving the profession altogether. One in 10 are considering leaving permanently.”

Pat Cullen, interim general secretary of the Royal College of Nursing, said: “After a shambolic day, comes a shambolic announcement.

“When the Treasury expects inflation to be 3.7per cent, ministers are knowingly cutting pay for an experienced nurse by over £200 in real-terms.”

Staff on their knees

Rachel Harrison, GMB national officer, said: “NHS staff are on their knees – exhausted, fatigued and anxious – as we look set to enter another wave of the Covid pandemic. Staff morale is rock bottom.

“Hospitals and ambulance services are operating under extreme pressures due to rising demand and staffing shortages.

“Now, rather than focusing on staff welfare they are being advised to enter the workplace against self-isolation advice and now given this frankly appalling pay offer.

“This was the opportunity for Government to turn their clapping in to genuine recognition. Their response is paltry. They have failed spectacularly.”

Meanwhile, a bitterly opposed pay freeze for police officers was confirmed and the confirmation of a pay freeze for teachers was branded an insulting “slap in the face”.