Cheeky Jeremy Corbyn supporters are attempting to drum up votes by printing leaflets which say “Stormzy says vote Labour”. The leaflet, handed out in Croydon, south London, claims the Tories hold 165 votes adding that “even you’re dad’s got more Facebook friends”. It was shared by Labour activists thousands of times on social media but […] 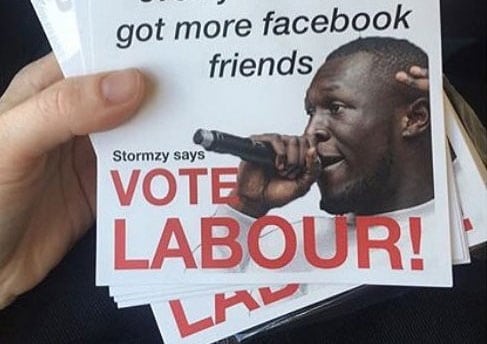 The leaflet, handed out in Croydon, south London, claims the Tories hold 165 votes adding that “even you’re dad’s got more Facebook friends”.

It was shared by Labour activists thousands of times on social media but Labour campaign bosses say they were not involved in the creation or distribution of the flyer.

Labour’s Sarah Jones lost out on the Croydon Central seat by 165 votes in the 2015 election to sitting MP Gavin Barwell and is this year the seat is the fourth tightest in the country. The leaflet, which features a picture of Stormzy, said: “The Tories hold Croydon by 165 votes, that’s literally it.

The tongue-in-cheek flyer comes after pollsters claimed Labour would win the election if only young people voted.