The marble statue of Sir Thomas Picton was labelled an ‘affront to black people’ by the city’s mayor. 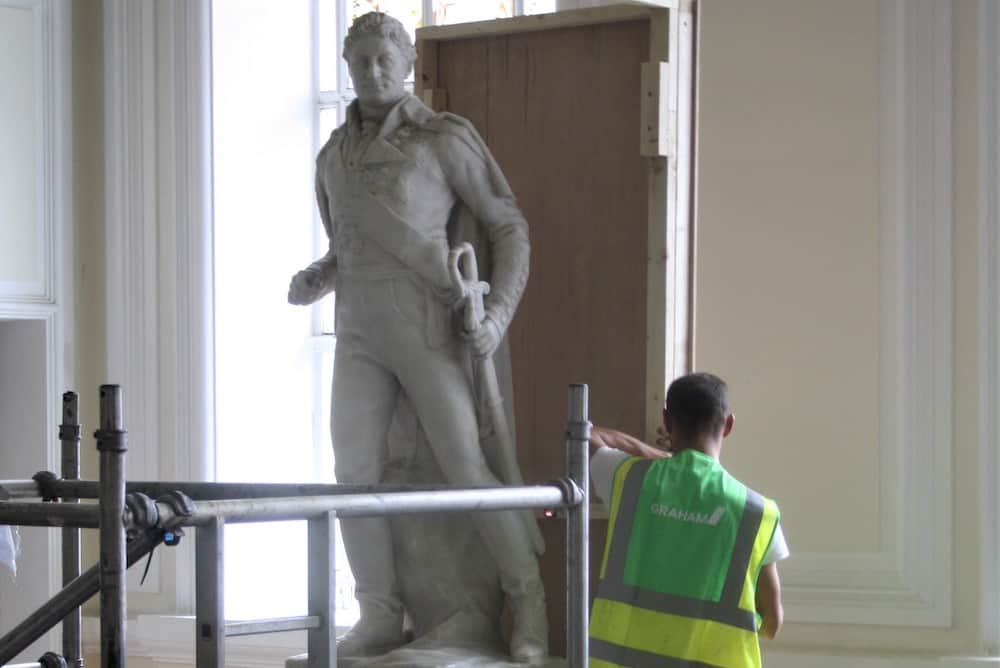 A statue of slave trader Sir Thomas Picton has been boarded up at Cardiff’s civic building following a vote to have it removed.

Contractors finished encasing the marble statue inside a wooden box on Friday morning, just hours after the successful vote at a Cardiff Council meeting.

The marble memorial to Sir Thomas Picton has stood in Cardiff City Hall since 1916 when it was unveiled by future prime minister David Lloyd George as part of a series depicting “Heroes of Wales”.

Sir Thomas was the most senior officer killed at the Battle of Waterloo, but was also known to have used the slave trade to build up his considerable fortune, as well as having a dozen slaves executed during his “highly brutal” regime as governor of Trinidad during colonial rule.

Cardiff’s first black mayor Dan De’Ath called for the statue of the “sadistic 19th Century slave-owner” to be removed in the aftermath of the statue of slave trader Edward Colston being toppled in Bristol during a Black Lives Matter march in June.

Mr De’Ath told the PA news agency: “I’m delighted. I think the way Cardiff has gone about the whole thing has been the right way. We’ve used democratic means to take it down.

“Most people were incredibly supportive. They recognise the significance of the statue and what an affront it is to black people. Black lives do matter.

“It’s therefore not appropriate to have such a person as Picton, who caused so much suffering and death and misery during his time as governor of Trinidad, commemorated and celebrated.

“Statues are not just about history. They are about celebrating the lives of the people they depict, and representing a certain set of values. These aren’t the values, he’s not the person, and these aren’t the deeds we want to celebrate and recognise in Cardiff today.”

Mr De’Ath said the decision to remove the Picton statue had “special significance” for him due to his own family history.

“I’m not only black, but my father came from Antigua, an island in the Caribbean. He was almost certainly a descendent of slaves himself,” he said.

“It means a lot. A huge amount to me and other black people out there in the community.”

An application to remove the statue from Cardiff City Hall will now be made to the Welsh Government, as the building is Grade I listed.

Cadw, the Welsh government’s historic environment service, will be asked to give advice, with a final decision expected to be announced near December.

On Thursday evening, councillors voted to remove the statue from the Marble Hall of Heroes with 57 in favour, five against, and nine abstentions.

The motion to have the statue removed was tabled by Labour’s Saeed Ebrahim, who tweeted following the vote: “The symbolism of me, a black man, tabling this motion to remove a slaver statue is not lost on me.”

Mr Ebrahim is chairing a task force set up by council leader Huw Thomas to work with black communities in Cardiff to understand the support they want from city officials.

Mr Thomas, who previously labelled the statue an “affront” to Black people, said: “There have been well-publicised calls in the wake of the Black Lives Matter movement for a reassessment of how individuals in British history with involvement in slavery are commemorated.

“Specifically in Cardiff the debate has focused on the statue of Sir Thomas Picton in City Hall.

“I am pleased our Council has taken the decision to remove this statue and I’m also pleased that this decision was made following a public debate and a democratic vote.

“However, whilst gestures such as this are important, they cannot deflect us from the harder task of trying to address the challenges still experienced by Black communities today.

In 1806, nine years before Picton became the highest-ranking officer killed at the Battle of Waterloo, he was found guilty of torturing a 14-year-old mixed-race girl during his rule of the Caribbean island.

The girl, Louisa Calderon, was tortured in an attempt to get her to confess to stealing from a businessman she lived with as a mistress, and was suspended with rope by one arm above a spike in the floor.

He was never sentenced, and two years later the verdict was reversed at a retrial.

Earlier in July, First Minister Mark Drakeford ordered an “urgent audit” of statues, street and building names to address Wales’s connections with the slave trade, which will be headed by the country’s first black female councillor, Gaynor Legall.