Little Amal began its journey from the Turkish-Syrian border, and will finish in Manchester in July. 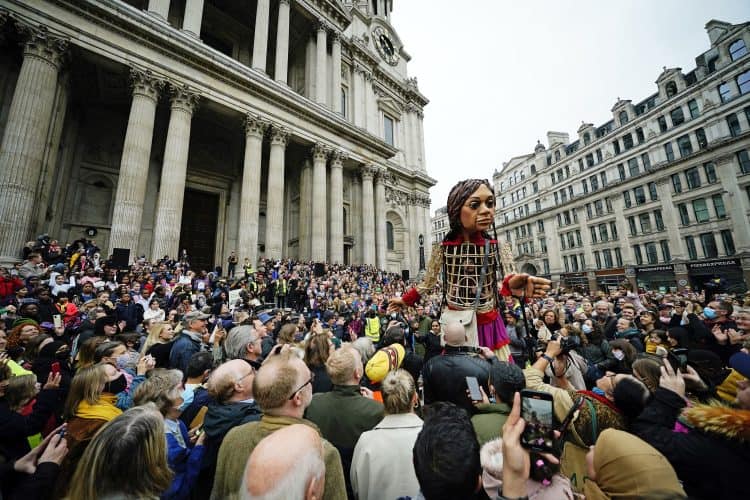 A giant puppet of a Syrian refugee has been welcomed at St Paul’s Cathedral as the dean said he hoped London could be a refuge for all those who need it.

The 3.5-metre tall puppet then climbed the cathedral’s steps before handing a gift – a wood carving of a ship at sea from St Paul’s birthplace at Tarsus in Turkey – to the dean, David Ison.

“Our doors are big enough to receive you”

Dr Ison addressed the puppet, saying: “The dome of St Paul’s is known around the world. Our doors are big enough to receive you.

“Our hope here for London is that it is big enough to receive all those who seek refuge in this city.”

He added that London is big enough for everyone.

“London is the most diverse city in the history of the world, ever,” he added. “There is room for everyone.”

A brass band, called Das Brass, played My Girl by The Temptations.

Faith leaders gathered on the steps, including the former canon chancellor of St Paul’s, Giles Fraser.

A children’s choir sang Consider Yourself, from the musical Oliver!, as the puppet danced.

It was controlled by a man sitting inside and manoeuvring it like an exoskeleton.

It then made its way down the steps before heading towards the Globe Theatre.

The puppet will spend the rest of the day walking along Southbank.

Little Amal began its journey from the Turkish-Syrian border, and will finish in Manchester in July.

The puppet crossed the Dover Strait earlier this week, a perilous journey made by more than 19,500 people on small boats this year, according to data compiled by the PA news agency.

Data from the United Nations High Commissioner for Refugees shows 87,449 people have crossed into Europe by the Mediterranean so far this year.

The UNHCR estimates at least 1,299 people are dead or missing.