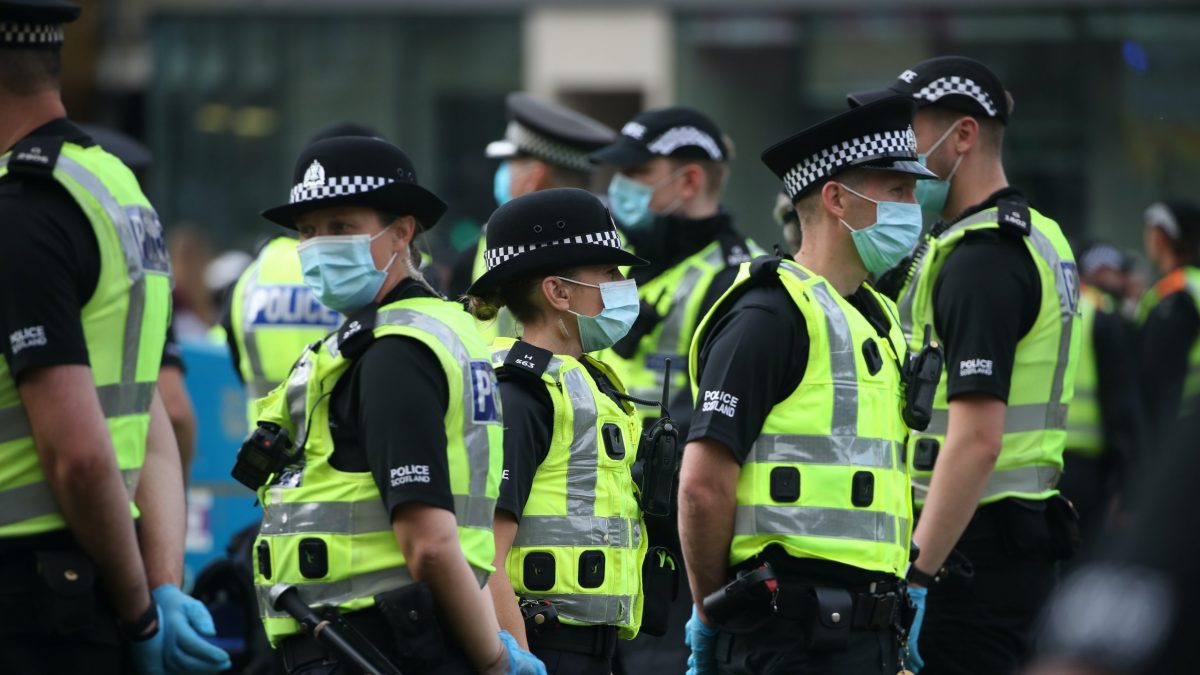 Nicola Sturgeon has said “racist thugs shame Scotland” after a “far-right” group clashed with police and protesters in Glasgow.

Police Scotland said six arrests had been made “so far” following the disturbance in the city’s George Square.

No Evictions Glasgow was due to protest over the living conditions of refugees at around 6pm, despite saying it had been made aware far-right groups would be turning up an hour before.

Hundreds of people were at the scene on Wednesday with a large police presence when “racist thuggery” broke out.

Disgraceful scenes in Glasgow tonight. Racist thugs shame Scotland. If they break the law, they should face the full force of it. And all of us should unite to say that welcoming refugees and asylum seekers is part of who we are. https://t.co/YL7M4YVhLN

First Minister Ms Sturgeon tweeted: “Disgraceful scenes in Glasgow tonight. Racist thugs shame Scotland. If they break the law, they should face the full force of it. And all of us should unite to say that welcoming refugees and asylum seekers is part of who we are.”

Police sealed off the area to traffic while the groups were there and the campaigners had to cut short their rally in George Square as it was deemed “unsafe”.

A statement posted by the campaigners on Twitter said: “It’s been decided the location of the demo at this time is not safe so we are going to leave the area as a group. If you haven’t made it in don’t try get in and stay away from the square. Try + make sure you are not alone if you are at the demo or in the vicinity.”

They continued their protest as they were escorted from the scene.

For years anti-racist groups & T Unions have demonstrated peacefully in our city of Glasgow without fear of attack- today shamefully it appears that far-right racist sectarian thugs have been given the freedom of our city #NoPlatform #BlackLivesMatter pic.twitter.com/zLrQaZfqrf

Chief Superintendent Mark Hargreaves said: “We had an appropriate police presence in place to ensure public safety during the demonstrations in the George Square area on the evening of Wednesday.

“So far, six men have been arrested for minor public order offences and reports will be submitted to the Procurator Fiscal.

“The majority of protesters have now left George Square and officers remain in the area for public reassurance.

“A review will be undertaken and should any further criminality be identified appropriate action will be taken.”

No place in a tolerant, open society

He tweeted: “Briefed by Police Scotland on disorder in George Sq. Let’s not mince our words, this has nothing to do with statues and everything to do with racist thuggery. Police have made a number of arrests already and will continue to take all necessary action against those responsible.”

Mr Yousaf also said he understood most of the arrests were “loyalists”.

The bigotry on display in Glasgow this evening has no place in a tolerant, open society and must be condemned. https://t.co/M0Sfx7Enle

He tweeted: “The bigotry on display in Glasgow this evening has no place in a tolerant, open society and must be condemned.”