After the chair of one of the country’s top NHS trusts resigned in protest against government NHS cuts making his and other hospital’s job impossible, the shadow health secretary made an emergency statement to the House of Commons today. “Lord Kerslake said our NHS faces the tightest spending figures in recent times,” said Labour’s Jonathan […] 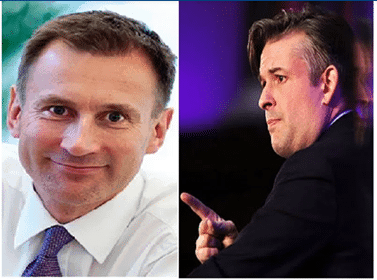 After the chair of one of the country’s top NHS trusts resigned in protest against government NHS cuts making his and other hospital’s job impossible, the shadow health secretary made an emergency statement to the House of Commons today.

“Doesn’t that mean like at Kings –  continued hospital deficits, growing waiting lists, greater rationing of care, the dropping of the 18 week target, more privatisation, an NHS pushed to the brink because of this Government’s persistent underfunding. Don’t patients deserve better?”

Lord Kerslake, former head of the civil service resigned as chairman of King’s College Hospital NHS Foundation Trust in London on Sunday, with a public plea that the health service could not continue “staggering along” under the current funding levels.

The Labour front bencher told parliament: “Lord Kerslake said the Government are simply not facing up to the enormous challenges that the NHS is currently facing. We agree.

“The Nuffield Trust have today called Kings ‘the canary down the coal mine’ for NHS finances.”

Ashworth added: “does the Minister therefor agree with NHS providers who warn that the savings hospitals have been ordered to find risk the quality of patient care?

“He will know that by September this year 83% of acute hospital trusts were in deficit to the tune of 1.5 billion.”

Philip Dunne responded that “before the 2015 election the then shadow health secretary indicated that he wanted £5.5 billion less for the NHS than this party wanted,” and insisted that the Chancellor had awarded extra funds for social care to stop the bed blocking of hospital procedures that the current care crisis is causing.

He added that in the last budget, the Chancellor of the Exchequer has added an “additional £2.8bn in revenue support for this year, next year and the following year and a further 3.5bn win capital.”

But NHS managers have come out in support of Lord Kerslake’s insistence that the NHS is in dire straits and that the crisis is far bigger than what Philip Hammond is prepared to tackle it with.

The NHS Confederation representing 85% of the NHS’s 240 trusts in England urged the government to ditch its policy of giving the service small increases and acknowledge how impossible its job is with its current budgetary constraints.

Lord Kerslake had written in his resignation letter:

“King’s, like many other hospitals, is fighting against the inexorable pressures of rising demand, increasing costs of drugs and other medical supplies, and the tightest spending figures in recent times. It was this squeeze that led Simon Stevens, the chief executive of the NHS, to argue publicly and rightly for an extra £4bn a year in the recent budget. In the event, the extra resources in the budget fell far short of that.”

Kerslake also warned: “Sadly, the reaction of the powers that be is often to shoot the messenger” and quoted the draft report of the independent Care Quality Commission following its recent inspection: “The chair was held in very high regard by staff at all levels… Under his leadership the shape of the board was said to have changed to one where the right skills and vision was present at board level.”

Yet that has not stopped stories being circulated since his departure that he was asked to consider his position as the Trust was put in special measures on Monday due to an inability to cope with the budgetary demands on it.

NHS Improvement said King’s board had agreed a budget deficit with it of £38 million for 2017/18, but last week forecast it would actually shoot up to £92 million.

Lord Kerslake told the BBC  this week that there was “not enough understanding of the scale of the challenge that both King’s and the NHS is currently facing”.