Bristol Mayor Marvin Rees said any decision on how the plinth should be used would be decided democratically through consultation. 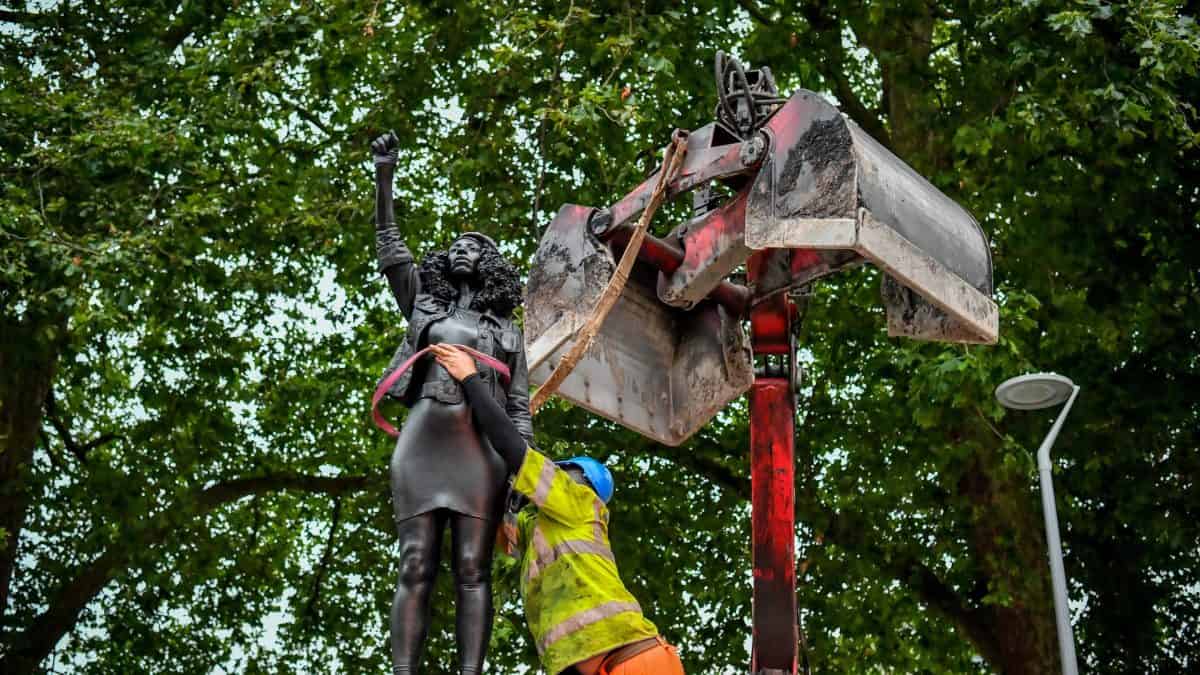 A sculpture of a Black Lives Matter protester erected on the plinth where a statue of slave trader Edward Colston used to stand has been removed.

Artist Marc Quinn created the life-size black resin and steel piece of Jen Reid after seeing a photo of her standing on the empty plinth following the toppling of the Colston statue in Bristol.

The sculpture, A Surge Of Power (Jen Reid) 2020, was installed shortly before 4.30am on Wednesday by Mr Quinn’s team without the knowledge or consent of Bristol City Council.

At around 5.20am on Thursday, council contractors used webbing straps to hoist the 7.5ft high piece off the plinth and place it into a skip lorry.

Bristol City Council tweeted: “This morning we removed the sculpture.

“It will be held at our museum for the artist to collect or donate to our collection.

“Bristol Mayor Marvin Rees issued a statement yesterday about the need for a democratic process where the people of Bristol decide the future of the plinth.”

Following the toppling of the Colston statue, Mr Rees announced that a commission was being set up to tell a “fuller history” of the Bristol.

Any decision on how the plinth should be used would be decided democratically through consultation, he said.

On Wednesday, Mr Rees issued a statement describing the sculpture as “the work and decision of a London-based artist” and said permission was not requested for it to be installed.

Discuss, debate and come to a collective view

During a Facebook Live on Wednesday evening, Mr Rees said the commission would help Bristol decide “what we want to celebrate and who we choose to celebrate”.

“Our belief was that that process would put us in a better position as a city to have a discussion, a debate and come to a collective view on what we put on that plinth, if anything,” Mr Rees said.

He said people had differing views within the city and people needed to know that they had been “respected and there was a fair and just process” if they did not get what they wanted.

“Putting a statue on that plinth overnight did not come in line with that process and therefore it can’t stay,” Mr Rees said.

“It will be protected. It’s an incredible piece of work to a very inspirational woman.”

He said he believed an empty plinth was a “very powerful statement” as it represented a city that had stopped and was thinking about what it wanted to do next.

Mr Rees added: “It needs to be decided by the people of Bristol but that’s going to take time and its a process we have to go through.”

The sculpture was created by Mr Quinn after he saw an image on Instagram of Mrs Reid standing on the empty plinth with her fist in the air after the Colston statue had been toppled.

He contacted the stylist, who lives in Bristol, on social media and she agreed to collaborate with him on the artwork.

More than 200 cameras in his studio were used to create a 3D print and a mould for the piece.

Mrs Reid described the sculpture as “so important” and said it helped keep the journey towards racial justice moving.

“This sculpture is about making a stand for my mother, for my daughter, for black people like me,” she said.

Mr Quinn said the sculpture was not put on the plinth as a “permanent solution” and acknowledged that it may only last “a day” or weeks before being removed.

“We want to keep highlighting the unacceptable problem of institutionalised and systemic racism that everyone has a duty to face up to,” he said.

If the statue is sold, profits will be donated to Cargo Classroom and the Black Curriculum – two charities chosen by Mrs Reid.

On June 7, protesters on the Black Lives Matter march used ropes to pull the Colston statue from its plinth in the city centre.

It was rolled to the harbourside, where it was thrown in the water at Pero’s Bridge – named in honour of enslaved man Pero Jones who lived and died in the city.

The city council retrieved the statue on June 11. It will be put on display in a museum with placards from the Black Lives Matter protest at a later date.

Watch: Newcastle United fans purring over this Alexander Isak goal but will they miss out on other target?