The solar system's most spectacular feature is disappearing at an 'alarming' speed - and will be completely gone within 100 million years, say astronomers 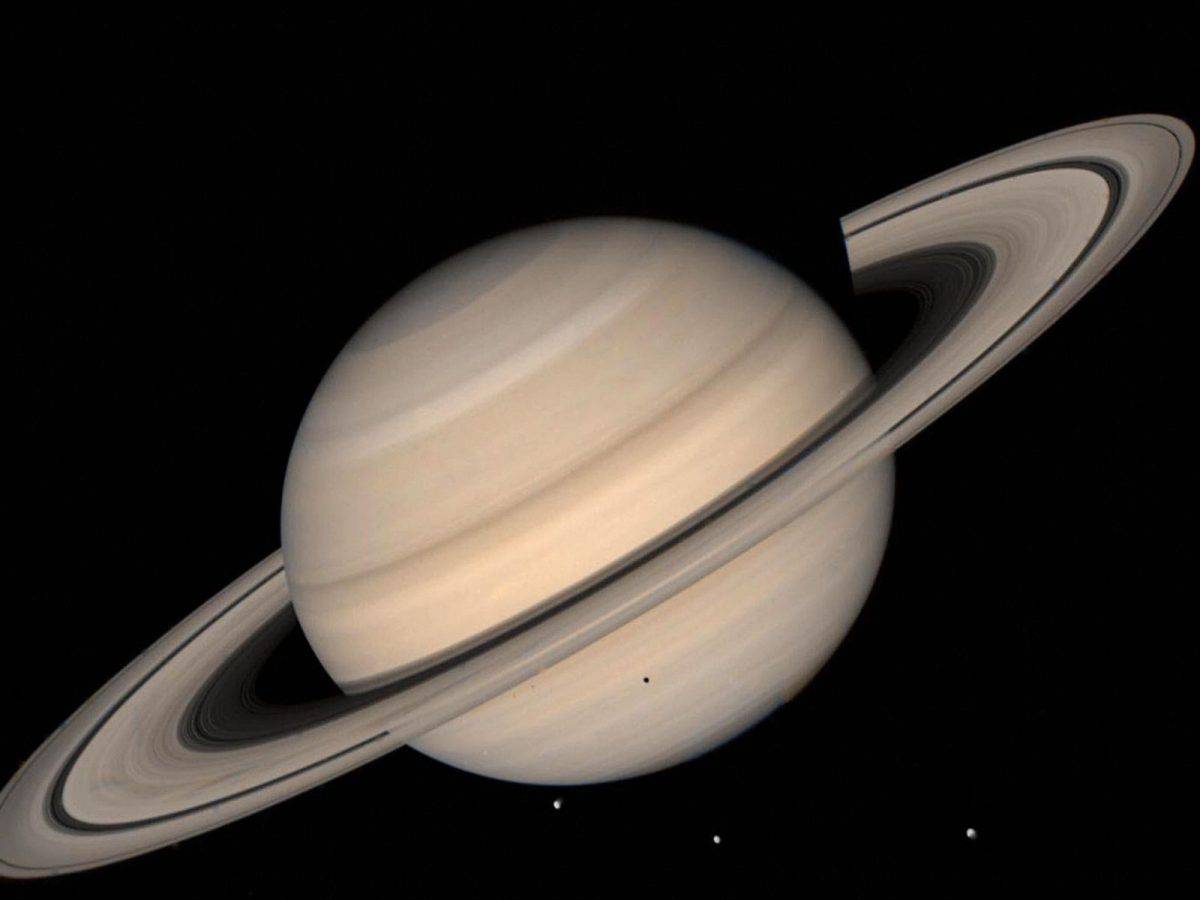 An Olympic size swimming pool of water is raining down on Saturn every half hour… from its iconic rings, according to new research.

The solar system’s most spectacular feature is disappearing at an ‘alarming’ speed – and will be completely gone within 100 million years, say astronomers.

This is the worst case scenario predicted from flybys by the Voyager 1 and 2 and Cassini spacecrafts.

The chunks of ice spinning round the gas giant in a great circle are being pulled in by gravity under the influence of its magnetic field.

Dr James O’Donoghue, of NASA’s Goddard Space Flight Centre in Greenbelt, Maryland, said: “We estimate this ‘ring rain’ drains the equivalent of an Olympic-sized swimming pool from Saturn’s rings in half an hour.”

This would see the entire ring system vanish in 300 million years – but it may actually happen more than three times faster.

Dr O’Donoghue and colleagues used instruments attached to the Keck telescope in Hawaii to discover the phenomenon.

The University of Leicester graduate said: “Add to this the Cassini-spacecraft detected ring-material falling into Saturn’s equator, and the rings have less than 100 million years to live.”

The study, published in the journal Icarus, found the rings are dying at the maximum rate estimated from Voyager 1 and 2 observations made decades ago.

Although it still sounds like a long way off, it is comparatively short compared to Saturn’s age of over 4 billion years.

Dr Tom Stallard, of the University of Leicester, said: “The young age of the rings has some really startling implications.

“It is possible, in the age of the dinosaurs, that Saturn’s rings were even larger and brighter than we see them today.

“Something dramatic must have happened around Saturn to make them this large, long after the planet itself formed.”

The first hints that ring rain existed came from Voyager observations of a seemingly unrelated phenomena.

These include changes in Saturn’s upper atmosphere, density variations in the rings and three narrow dark bands around the planet at northern mid-latitudes.

They appeared in images of Saturn’s hazy upper atmosphere, or ionosphere, made by NASA’s Voyager 2 mission in 1981.

In 1986, Jack Connerney of NASA Goddard published a paper in Geophysical Research Letters that linked the narrow dark bands to the shape of Saturn’s magnetic field.

This suggested electrically-charged ice particles from the rings were flowing down invisible magnetic field lines – and dumping water in the upper atmosphere.

It washed away the stratospheric haze – making it appear dark and producing the narrow dark bands captured in the Voyager images.

The next phase of Dr O’Donoghue’s research will explore how the rings change according to changes in Saturn’s seasons.

The origins of Saturn’s rings have long puzzled scientists, who are still unsure if the planet was formed with the rings or if it acquired them at a later stage.

According to the findings of the new research, it is now considered to be more likely that it acquired the rings after it formed.

The study suggests Saturn’s rings are unlikely to be older than 100 million years.

Dr O’Donoghue said: “We are lucky to be around to see Saturn’s ring system, which appears to be in the middle of its lifetime.

“However, if rings are temporary, perhaps we just missed out on seeing giant ring systems of Jupiter, Uranus and Neptune, which have only thin ringlets today!”

Theories which could explain the origin of the rings include the idea they came about when small icy moons collided after their orbits were disturbed by a passing asteroid or comet.